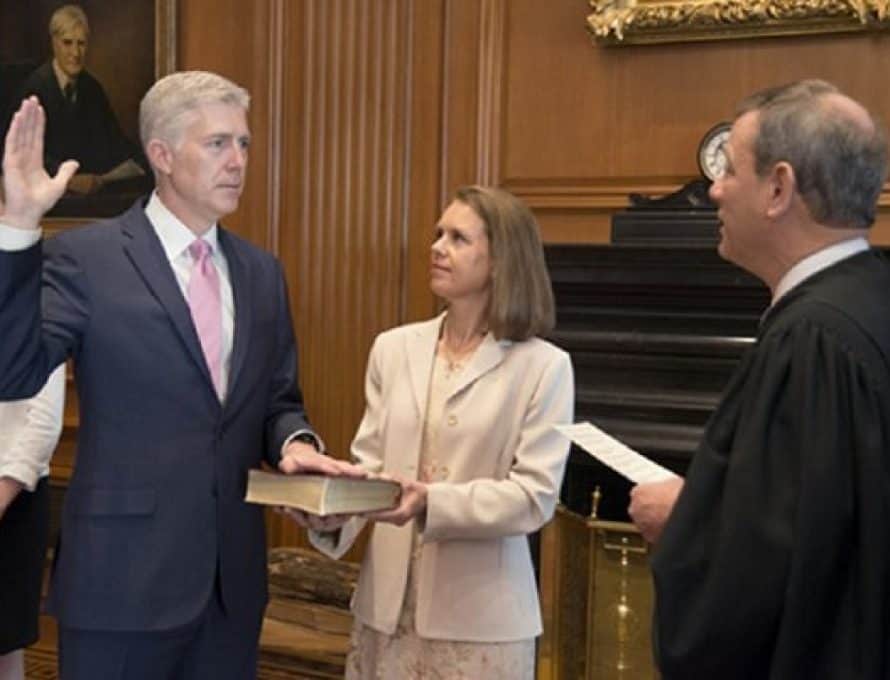 The swearing in ceremony today came after Republicans defeated a Democrat filibuster last week by changing Senate rules to allow for a majority vote on his nomination as the post and needing 60 votes to stop Democrats from preventing a vote on the nomination itself. The battle saw pro-life organizations side with Gorsuch and Planned Parenthood and other proportion groups opposing him.

Justice Gorsuch was sworn in during a private ceremony and he is expected to take the judicial oath in public at the White House later April 10.

Senators voted 54-45 for Gorsuch with a few Democrats voting with all Republicans for his nomination. Manchin of West Virginia, Donnelly of Indiana, and Heitkamp of North Dakota joined Republicans.

National Right to Life called the vote the “the capstone on the yesterday’s landmark victory, when united Senate Republicans put an end to the ability of Senate Democrats to utilize the filibuster to deny confirmation to Supreme Court nominees of Republican presidents.”

“McConnell’s successful ‘nuclear’ motion produced a historic victory for Senate Republicans, the President, and the country — and a huge defeat for a coalition of left-wing groups, led by the abortion lobby, that had relentlessly pressured Democratic senators to filibuster the confirmation of Judge Gorsuch,” said National Right to Life Senior Policy Advisor Douglas D. Johnson. “For decades, liberal senators and interest groups had attacked Republican judicial nominees with procedural and political weapons that Republicans were slow to match. This week, the Republicans took decisive action to restore parity to the judicial confirmation process, and we commend them for it.”

National Right to Life President Carol Tobias added, “All too often, our efforts to protect unborn children and other vulnerable humans have been overridden by judges who believe they have a right to impose their own policy preferences. Judge Gorsuch appears to believe that judges are constrained to enforce the text and original intent of constitutional provisions, and on all other matters should defer to democratically elected lawmakers – this heartens us, and alarms those who have relied on activist judges to impose their radical pro-abortion policies.”

During three days of Senate confirmation questioning, Gorsuch made it clear that he does not consider Roe v. Wade a “super precedent” that cannot be overturned. He also defended his role in cases supporting the religious Liberties of Little Sisters of the Poor and Hobby Lobby and their attempts to stop the Obama Administration from forcing them to pay for abortion drugs for their employees.

Gorsuch also defended his opposition to assisted suicide — saying that it is not appropriate to intentionally take the life of another human being.