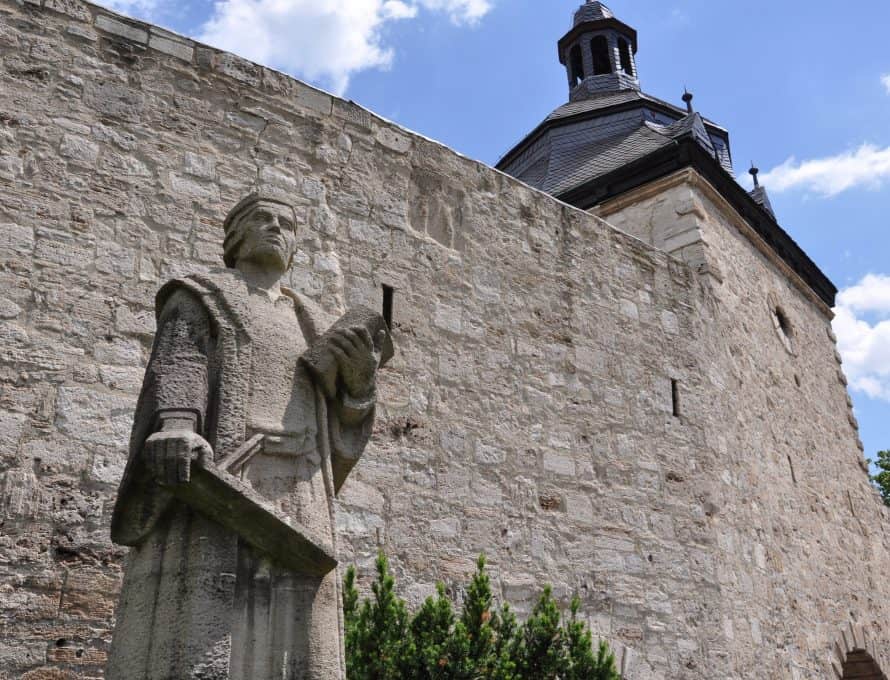 EDITOR’S NOTE: This is the tenth column in a year-long series leading up to the 500th anniversary of the 16th-century Reformation on Oct. 31, 2017.

On July 13, 1524, preaching to various princes in the German city of Allstedt, Thomas Müntzer foretold the end of the ages.

Müntzer interpreted for them the words of the Prophet Daniel as he described the dream of King Nebuchadnezzar (See Daniel 2): In this dream, King Nebuchadnezzar had seen a statue, with a head of gold, chest and arms of silver, stomach and hips of bronze, and feet of mixed iron and clay. As the king looked at the statue, moreover, a stone struck the statue’s feet, destroying it completely.

Each section of this statue represented a kingdom, and according to Müntzer the feet of mixed iron and clay represented the godless Christendom of medieval Europe. The stone in Nebuchadnezzar’s dream symbolized Christ’s godly people, who would take up the sword to overthrow the godless. Müntzer called the princes of Germany to support this cause, warning them that if they refused his call they too “may be slain without mercy.”

Referring to himself as “Thomas Müntzer with the Sword of Gideon,” this warrior-prophet joined a horde of peasants in May 1525 for what he expected to be the beginning of the end—the overthrow of godless tyrants. In fact, as will be seen below, his own expectations of victory would soon be crushed.

Meanwhile, in the Swiss city of Zurich – where Ulrich Zwingli was pushing ahead his vision of reform – another set of Radical Reformers initiated a peaceful restoration of New Testament Christianity, with an emphasis on the baptism of believers and a life of discipleship.

Once a follower of Martin Luther, Müntzer soon became disenchanted with the Wittenberg Reformer. He thought Luther too hesitant in his reform and too dependent on the letter of Scripture. Luther, he said, preached a dead faith, a message empty of spiritual power. He would call Luther by the names of “Brother Hog,” “Soft Living Flesh,” “Pussyfoot,” “Carrion Crow,” and “Dr. Liar.” And these were more than shallow insults. “With these descriptions he purposed to descry in Luther a sign of the end of the age,” wrote historian George Huntston Williams in his classic tome, The Radical Reformation.

Anticipating the end of all ages, Müntzer was soon swept up in the “Great Peasants’ War” that spread across the Germanic territories of the Holy Roman Empire during the years 1524-1526.

“These uprisings were not a response to Müntzer’s incendiary preaching,” the late Southern Baptist historian William Estep—himself an expert in the Radical Reformation—wrote in his book, Renaissance and Reformation. Instead, he said, “they were the flaming up of long-smoldering discontent that had become increasingly apparent as the nobility, hard-pressed for ready cash, began to take away the traditional privileges and rights of a down-trodden people.”

Granted, the peasants of Europe saw a new justification for their cause in Luther’s proclamation of Christian liberty, which they understood in social egalitarian terms. And the more radical, apocalyptic preaching of men like Müntzer only fed the wildfire that was already spreading across Germany.

On May 12, 1525, nearly a year after preaching to the German princes of Allstedt, Müntzer took up the sword for battle, confident that God would vindicate the peasants’ cause. Faced by a large army of experienced calvary and foot soldiers, the peasants fought nonetheless.

Prior to their defeat, Müntzer sent a letter to Wittenberg for help. But Luther and his companions ignored his pleas. Indeed, although Luther openly sympathized with some of the peasants’ concerns, he also despised rebellion—especially since the rebels distorted his message about Christian liberty. In the spring of 1525, a few weeks after calling German princes to patiently administer justice to the peasants, Luther wrote his tract, “Against the Robbing and Murdering Hordes of Peasants.”

“Stab, smite, slay,” Luther cried. Anyone who dies fighting against the peasants, he added, dies a martyr’s death.

Whether inspired by these words or not, the German princes doubtless ordered their armies to “stab, smite” and “slay.” They overthrew the host of peasants whom Müntzer had joined. And, on May 27, 1525, they beheaded Müntzer himself.

The Beginnings of Swiss Anabaptism

Earlier, soon after hearing about Müntzer’s sermon before the German princes in Allstedt, a group of radical Swiss reformers—led especially by a man named Conrad Grebel—sent Müntzer a letter.

This was their second letter to the revolutionary prophet. In an earlier letter, sent during the fall of 1524, they insisted that people shouldn’t “protect the gospel and its adherents with the sword.” But at that time, they believed that Müntzer taught likewise. As soon as they heard about Müntzer’s revolutionary preaching, they wrote to him again, urging him to “desist” immediately.

Grebel and some of his companions would soon become leaders among the first Swiss Anabaptists—a group of Radical Reformers who broke away from Reformer Ulrich Zwingli of Zurich, Switzerland, by denying the validity of infant baptism. And like their modern-day descendants among the Mennonites, these early Anabaptists would come to champion pacifism. Yet, according to historian Harold Bender, their “Anabaptist Vision” was ultimately rooted in discipleship:

“The true test of the Christian, they held, is discipleship,” he wrote. “The great word of the Anabaptists was not ‘faith’ as it was with the reformers, but ‘following’ (Nachfolge Christi). And baptism, the greatest of the Christian symbols, was accordingly to be for them the ‘covenant of a good conscience toward God’ (1 Peter 3:21), the pledge of a complete commitment to obey Christ, and not primarily the symbol of a past experience.”

On Jan. 21, 1525, while meeting in the home of Felix Manz, Grebel put into practice this vision when he baptized George Blaurock upon his profession of faith. In turn, Blaurock baptized Grebel, Manz and others who so desired. With these first believers’ baptisms of the Reformation period, Swiss Anabaptism was born.

Yet, because they submitted to believers’ baptism and to a life of discipleship, these early Anabaptists soon experienced what Grebel had previously written to Müntzer: “True believing Christians are sheep among wolves, sheep for the slaughter. They must be baptized in anxiety, distress, affliction, persecution, suffering, and death.” Indeed, by 1529, these leaders of the early Anabaptist movement would be dead, having endured severe persecution for their beliefs even at the hands of Protestant Reformers. Whereas the revolutionary Müntzer both lived and died by the sword, they took up their crosses and followed Christ Jesus to the very end.