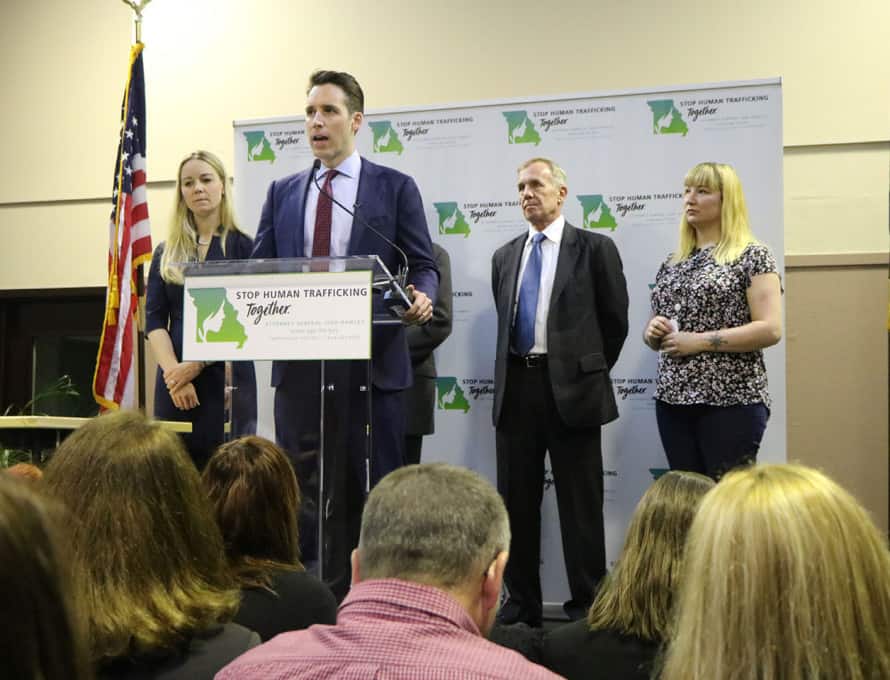 In April 3 comments made at an undisclosed human trafficking rescue site in the St. Louis area, Joshua Hawley likened human trafficking to modern day slavery, noting that each year, thousands of young women and girls are forced into commercial sexual exploitation ­­– forced to provide sex for money.

“We need a new abolitionist movement to confront this oppression and turn it back,” he said. “And I am here today to announce that Missouri will help lead the way.”

What is novel in the attorney general’s approach is that he is issuing regulations under his authority enforcing consumer protection laws to target traffickers.

“It’s a bold new approach designed to open a new front in the fight against trafficking,” he said.

The new regulations: make using a business as a front for trafficking illegal; make debt bondage illegal under Missouri’s consumer protection statutes; target those who induce victims to come to Missouri based on the false promise that a good job awaits, only to force them into commercial sex or slave labor.

John Yeats, executive director of the Missouri Baptist Convention (MBC), was present during the press conference, and echoed the need to combat trafficking.

“This is huge news that places our state on the cutting edge for protecting women and children from sexual predators who use this abhorrent crime as a tool to make money,” he said. “In our state, the sheer numbers of people caught up in this vile industry make a person want to weep over the iniquity of a culture that allows this form of slavery to go unchecked.”

Though the issue of human trafficking is growing in its awareness, the challenge is not new to Missouri Baptists. The Missouri Baptist Children’s Home has a ministry that helps victims of trafficking looking to escape, and Restoration House – a ministry of Blue River-Kansas City Baptist Association – does the same.

Further, in 2014 messengers to the MBC annual meeting passed a resolution condemning human trafficking, calling Baptists to pray for victims and – in action that is now coming to fruition ­– urging the state’s attorney general to aggressively enforce laws that prohibit such trafficking.