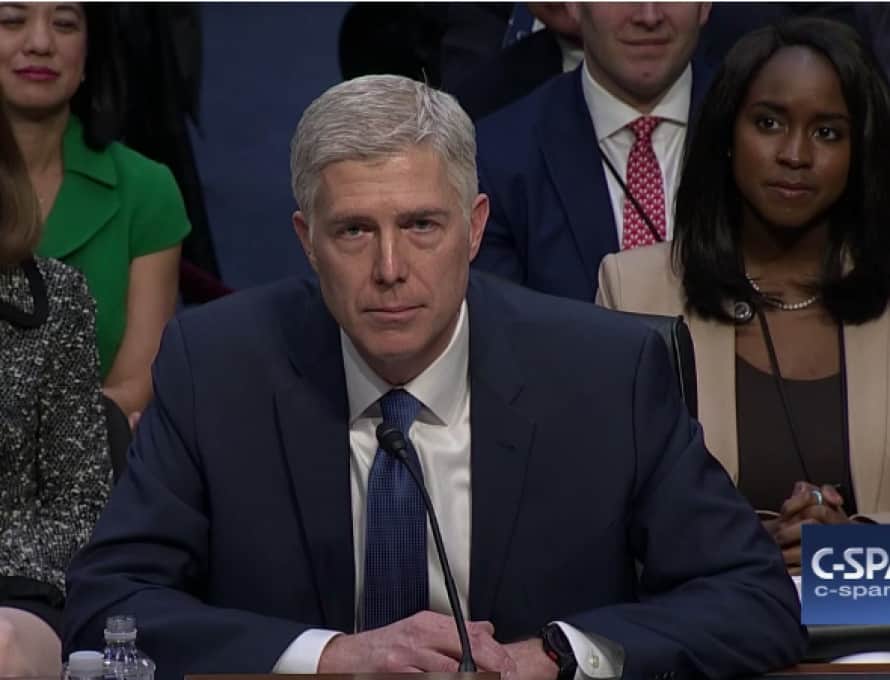 A still taken from the Supreme Court nominee Neil Gorsuch confirmation hearing before the U.S. Senate Judiciary Committee on March 20, 2017.

WASHINGTON (BP) –Neil Gorsuch defended his judicial independence and refused to express his opinion on U.S. Supreme Court decisions – including Roe v. Wade – during the hearings on his nomination to serve as a justice. He also

When asked about judicial independence March 21 by committee chairman Charles Grassley of Iowa, Gorsuch said, “I have no difficulty ruling for or against any party” in a case. Later, he told Democratic Sen. Patrick Leahy of Vermont, “I will apply the law faithfully and fearlessly and without regard to persons.”

Judicial independence, Gorsuch said, equates to the judicial oath he took “to administer justice without respect of persons, to do equal right to the poor and the rich, and to discharge impartially the duties of my office.”

He doesn’t believe in “litmus tests for judges,” Gorsuch replied to a question from Grassley.

“I wasn’t about to become party to such a thing,” he said, adding no one representing the Trump administration in the nomination process “asked me for any commitments, any kind of promises on how I would rule in any kind of case.”

“I have offered no promises on how I would rule on any case to anyone, and I don’t think it’s appropriate for a judge to do so, no matter who’s doing the asking.”

Sen. Dianne Feinstein of California, the committee’s lead Democrat, expressed particular concern about Trump’s promise he would select pro-life judges who would overturn Roe, the 1973 opinion that legalized abortion throughout the country. She had described Roe as a “super-precedent” in her opening statement March 20.

She asked Gorsuch March 21, “Do you view Roe as super-precedent?”

He replied, “It has been reaffirmed many times.”

Earlier, Gorsuch acknowledged Roe is a precedent of the high court that was reaffirmed in the 1992 Planned Parenthood v. Casey opinion and in several other cases. A precedent is a ruling that sets a legal standard for the future.

In assessing precedent, a judge asks, Gorsuch said, among other questions, “What about the doctrine around it? Has it been built up over the years” or “Has it become an island?”

“You start with a heavy presumption in favor of precedent” and “in a very few cases you may overrule precedent,” he said.

On religious liberty questions, Gorsuch again commented broadly but not about potential cases he might rule on.

Leahy asked if a blanket religious litmus test for entering the United States is consistent with the First Amendment.

“Senator, we have a free exercise clause that protects the free exercise of religious liberties by all persons in this country,” Gorsuch said. “If you’re asking me how I would apply it to a specific case, I can’t talk about that for understandable reasons.”

When asked about a religious test to enter the military, Gorsuch said, “That is against the law.”

In his opening statement March 20, Gorsuch told the committee, “[T]hese days we sometimes hear judges cynically described as politicians in robes, seeking to enforce their own politics rather than striving to apply the law impartially. But if I thought that were true, I would hang up the robe. The truth is I just don’t think that’s what a life in the law is about.

“If judges were just secret legislators, declaring not what the law is but what they would like it to be, the very idea of a government by the people and for the people would be at risk,” he said. “And those who came to court would live in fear, never sure exactly what the law requires of them except the judge’s will.”

The 10th Circuit Court, with Gorsuch writing a concurring opinion in the majority, ruled in favor of Hobby Lobby in 2013 in the arts and crafts chain’s challenge to the Obama administration’s abortion/contraception mandate. The mandate required employers to provide coverage for contraceptives that can potentially cause abortions. The next year, the Supreme Court affirmed the appeals court opinion, upholding objections by “closely held,” for-profit companies such as Hobby Lobby, which is owned by the Green family.

In response to Sen. Orrin Hatch, R-Utah, Gorsuch agreed the Religious Freedom Restoration Act (RFRA), a 1993 federal law at the heart of the case, protects individuals with minority religious beliefs as much as for-profit corporations owned by evangelical Christians.

RFRA – which requires the government to have a compelling interest and use the narrowest possible means in burdening a person’s religious exercise – also “applies to Little Sisters of the Poor [a Roman Catholic order of nuns that serves the needy] and protects their religious exercise,” Gorsuch said.

In addition, the 10th Circuit “held [RFRA] applied to a Muslim prisoner in Oklahoma who was denied a halal meal,” Gorsuch told Hatch. “It’s also the same law that protects the rights of a Native American prisoner who was denied access to his prison sweat lodge, it appeared, solely because of a crime he committed, and it was a heinous crime. But it protects him too. I wrote the [opinion in the] Native American prisoner case and wrote a concurrence in the Muslim case.”