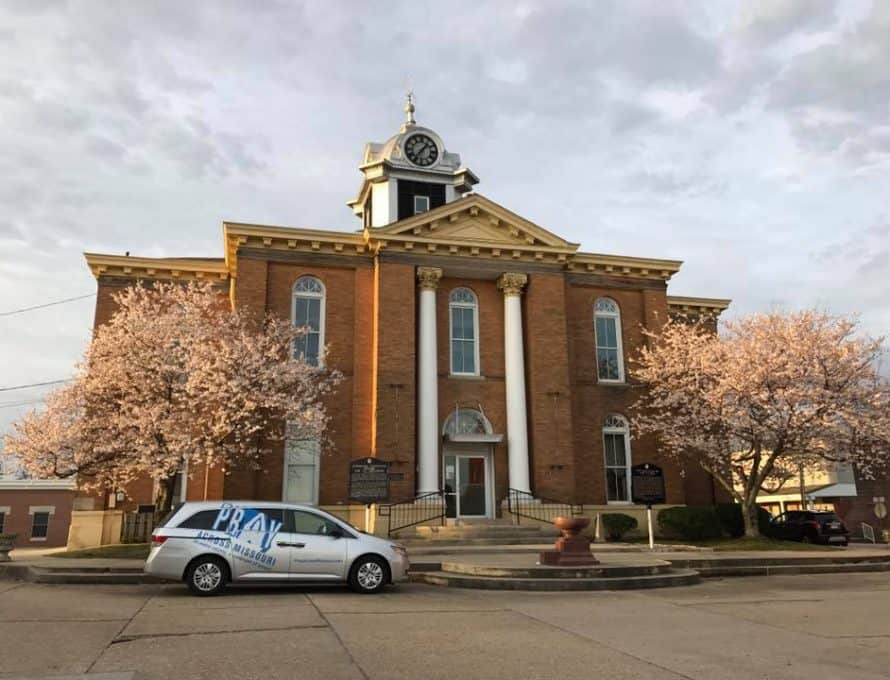 KENNETT – If you see a silver minivan cruising Missouri’s highways eblazoned with a “Pray Across Missouri” logo on the side, you might as well follow it to the county courthouse.

The van is making stops at 45-minute prayer meetings set at the courthouse of every  one of Missouri’s 114 county seats in 2017-18. The Pray Across Missouri initiatave is a cooperative effort of Missouri Baptists to engage in prayer for the transformation of lives and communities with the gospel, according to MBC Executive Director John Yeats. “We’re intentionally beginning Pray Across Missouri in a non-election year because this is not a political campaign,” he said. “Rather we want to pray for all of those who serve Missourians in the public square, and to acknowledge that God has placed men and women in authority over us to promote good and restrain evil. God’s Word calls us to pray for them.”

At the same time, Yeats said, “We know ultimately that lives and communities are truly transformed, not by political processes, but by the gospel of Jesus Christ. Our prayer is for a mighty movement of God in the Show Me State.”

The first rally was March 20 at the Dunklin County Courthouse in Kennett, followed later that day in Pemiscot, New Madrid and Mississippi counties. Attendence at the 14 events so far has averaged 25, with two sites recording 55 people gathered to pray. Due to water issues at the Reynolds County courhouse in Centerville, the meeting had to be moved down the street to First Baptist Church.

Kevin Carter, director of missions for Black River Baptist Association, helped coordinate the first prayer event at the Dunklin County Courthouse, where 55 people showed up to pray for spiritual transformation in their community, lives and churches. They were met by six county and city employees who were specifically prayed for.

Through the prayer event, Carter made a connection with one county official who is new to the area and told Carter he is excited to find ways the local churches can help the county improve itself.

“I’m anxious to see what kind of response happens statewide,” Carter said. “Hopefully this will be the beginning of us actually seeing communities and churches transformed.”

The full schedule is not yet finalized, though the prayer tour and the Pray Across Missouri van will continue across southern Missouri this spring.

Readers can follow its progress and find updated schedules at mobaptist.org/strategic-partners/pray-across-missouri or by searching for “Pray Across Missouri” on Facebook.