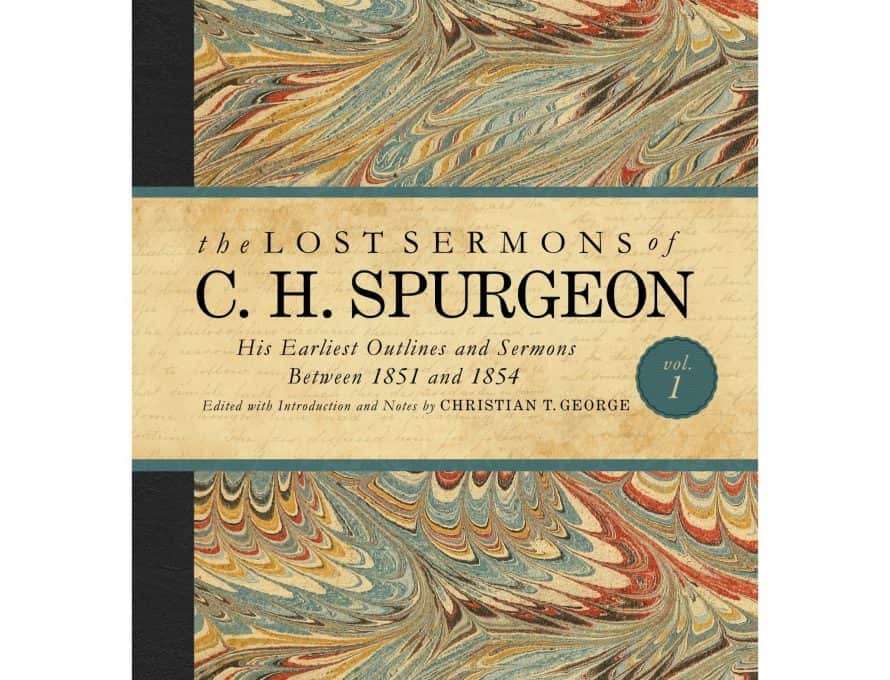 “The Lost Sermons of C.H. Spurgeon” series is being researched and edited by Christian T. George, assistant professor of historical theology and curator of the Spurgeon Library at Midwestern Baptist Theological Seminary, which hosted a luncheon for the launch at its Kansas City, Mo., campus.

The first volume includes a series introduction, an overview of Spurgeon’s life and times, 78 sermons he preached itinerantly and in his first pastorate at Waterbeach Chapel, and George’s analysis of the sermons. Each volume within the compilation will include full-color facsimiles, transcriptions, contextual and biographical introductions, and editorial annotations of sermons from Spurgeon’s earliest years in the pulpit.

The Lost Sermons of C.H. Spurgeon adds approximately 10 percent more material to Spurgeon’s complete body of literature, with the volumes being developed for scholars, pastors and students alike, according to B&H Academic, a publishing division of LifeWay Christian Resources of the Southern Baptist Convention.

“It is a tremendous occasion to partner with B&H Academic and mark the launching of this vital series – The Lost Sermons of C.H. Spurgeon, which documents Spurgeon’s earliest sermons – on the campus of Midwestern Seminary,” President Jason Allen said. “God has shown immeasurable favor upon our institution over the past five years, and one of the greatest blessings has been through sending Christian George to serve on our faculty and curate our Spurgeon Library.

“As one of the foremost Spurgeon scholars, Dr. George has worked tirelessly researching and writing this volume…. I am certain that these efforts will pay enormous dividends in reaching the world for Christ,” Allen said at the Feb. 15 luncheon.

Jim Baird, vice president of B&H Academic, noted that the launch of the initial volume provided an opportunity to further the imprint’s relationship with Midwestern Seminary and to offer a practical resource that encourages Christian believers everywhere.

“This project represents years of hard work by Dr. Christian George and the beginning of a fruitful partnership…,” Baird said. “This partnership should serve to encourage and bless numerous church leaders and introduce new people to the depth and breadth of Charles Spurgeon’s ministry.”

George, interviewed by Allen during the luncheon, described the long, and at times frustrating, path that led to the day’s events. He noted how in 2011, while researching for his doctor of philosophy degree at Spurgeon’s College in London, he came across the original journals containing the sermons.

George soon realized they were messages that Spurgeon had previously promised to have published for his readers. Unfortunately, the demands of ministry prevented him from fulfilling his promise. Thus, the sermons had been lost to history for some 160 years.

Upon realizing the value and scope of the documents, George came to an agreement with the college’s principal and began to search for a publishing company. In due course, he said, that led him to B&H Academic, with the volumes being published “for such a time as this.”

George said the aim of the series is to bring its readers into a closer relationship with Jesus Christ – through the lens of Charles Spurgeon’s ministry and messages.

“Ultimately, the heartbeat of this project is that its readers will not look to Spurgeon, but through Spurgeon, to find a deeper relationship with Jesus Christ,” George said. “There is a danger that we might worship Spurgeon, and we certainly don’t want to do that. We want our sole focus of worship to be on Christ. However, we don’t want to forget Spurgeon and his contributions to the Christian faith, either.”

Volumes 2 and 3 are in various stages of the editing process and, according to B&H, the full 12-volume set will be completed by 2023. To learn more about obtaining a copy of Volume 1, click here.

Spurgeon, born in 1834, served as pastor of Metropolitan Tabernacle, a London megachurch, from 1854 until his death in 1892.

The Spurgeon Library at Midwestern, dedicated in October 2015, includes Spurgeon’s personal collection of more than 6,000 books and hundreds of artifacts, letters and assorted materials. The seminary acquired the collection in 2006 from William Jewell College in Liberty, Mo.