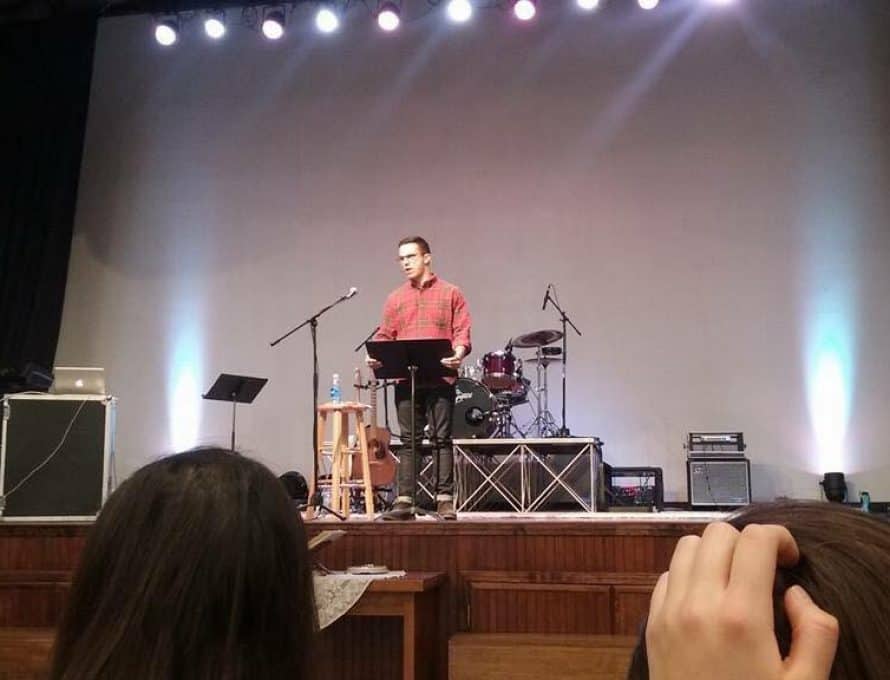 “We had four joint worship services with a band and small groups in between,” said Jason Kramer, pastor of Sturgeon Baptist. We ate together and played games together.”

The events included about a dozen participating churches, including some outside of the Crossroads Association.

“Our goal was to challenge people with the gospel in hope they would leave the weekend changed,” he said.

“We had a black light banquet at First Baptist, Centralia. The kids all looked forward to wearing bright and white colors. They had fun. It was great,” Kramer said.

Ronnie Kurtz and Josh Hedger both of Kansas City area spoke and the band was Sow and Tether from Mississippi.

The worship services were at Hallsville Baptist. The last session was Sunday morning and included the approximate 175 attending students, the 70 or so adults. This brought the congregation size to about 400 at Hallsville.

“Logistically, it was great, the congregation absolutely loved it and hopes to do it again in the years to come,” said Matt Hale, the worship and student ministry leader at Hallsville. “The students loved it.”

“It has been in the works for just under a year. We’ve been meeting with other pastors and youth pastors in the Crossroads Association. Our part was easy – just open the doors. Our adults have been supportive since day one,” Hale said.

“This was an unbelievable group of guys to work with,” Kramer said.

What impressed me the most was the level of teaching. It was incredibly challenging to out students,” said Brian Veal, Associate pastor of First Baptist, Moberly. “The best thing wasn’t necessarily the teaching but the small group time. They (youth) opened up about their struggles, and we helped them with their everyday teenage issues.”

“The cooperation of our association was very important. We can do a lot more together than apart. It was good for ours students to see others around the association,” Veal said.

“There were definitely decisions to follow Jesus deeper,” Kramer said, adding that other students were brought closer “to the cusp of making a decision (for Christ).”

“The whole weekend of Ronni’s messages were who Jesus was, what Jesus did, and what is our response as we take the gospel forward.

“We heard a lot of comments about the quality of the event, that it looked like a state event, not just an association event,” Kramer said.

Kramer said college students also assisted in the execution of the event.

“We’re very old in the things we do and we’re bringing in another generation,” he said.