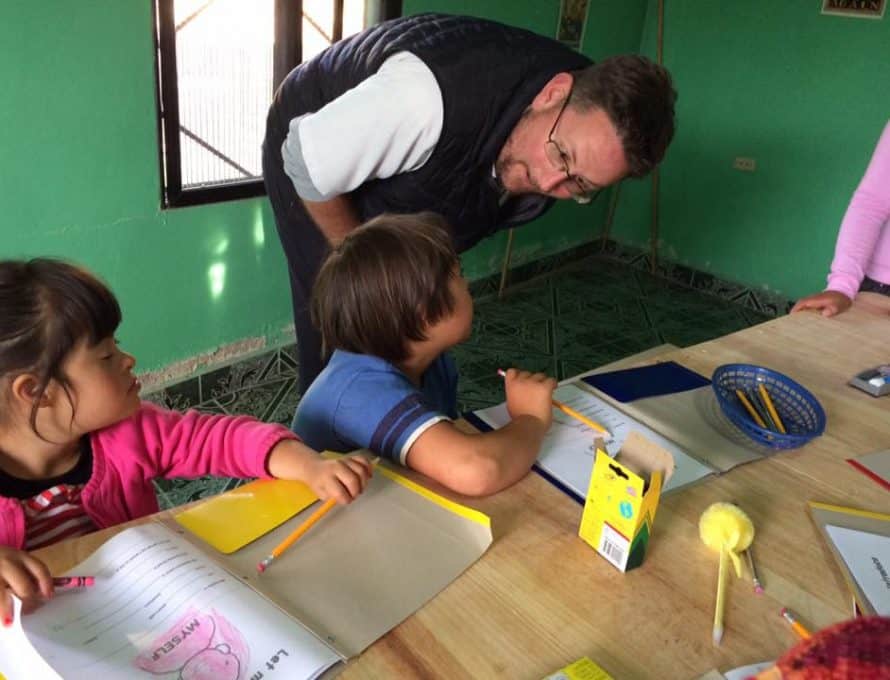 YAMARANGUILA, Honduras – Missionary Jon Looney works with special-needs children at the launch of their “Teach Me to Love” Academy here, March 9. Photos courtesy of Jon and Alicia Looney

YAMARANGUILA, Honduras – When they were married 13 years ago, Jon and Alicia Looney felt God leading them to the mission field.

But their passion for missions was finally confirmed and revitalized when they went to Puebla, Mexico, with a short-term mission team from Life Point Church, a Missouri Baptist church plant in O’Fallon. Since that time, they’ve come to realize that God prepared them for the mission field through the past decade of experience as school teachers.

Today, the Looneys minister in Yamaranguila, Honduras. Here, they serve as teachers at Abundant Life Christian Schools, and they deeply desire to reach out to some of the ‘least of these’ in Honduras—namely, children with special needs.

“A lot of these kids are hidden,” Alicia told The Pathway. “Basically the feeling (in this society) is that, if your child has special needs, you did something to anger God or your family is cursed.” But inspired by 1 John 4:19 – “We love because He first loved us” – the Looneys “want to love those that this society rejects.”

Prior to joining the staff at Abundant Life Christian Schools, the school hadn’t been able to accept any special needs children into its program. But this is changing now, partly because of the Looneys’ ministry at the school. Although each of them have classes of their own—Jon teaches 27 sixth-graders, and Alicia teaches second-graders—they use their planning hour each day to give one-to-one attention to special-needs children in other classes.

On March 9, they also kicked-off “Teach Me to Love” Academy. Currently, during this academy, they’re teaching conversational English, inviting adults to participate on Monday evenings and children to participate on Thursday evenings. And, yes, they accept special needs children.

“Two little girls with Down syndrome are coming,” Alicia said.

“It’s really heartbreaking,” Jon said. “These parents are just looking for a shred of hope. They’re just looking for something that their children can do” to learn and grow, since such opportunities are often non-existent in their society.

For this reason, parents were thrilled when they heard that their children could attend the “Teach Me to Love” Academy.

“The moms were like, ‘Wait, you think my daughter can learn English?’” Alicia said, explaining that “only the elite in Honduras learn English.”

Alongside this program, the Looneys are leading a small group Bible study with other teachers, and they began another outreach ministry called “Faith and Football.” With the blessing of the mayor, the Looneys started inviting area children and their families to a local football (aka, soccer) field to have fun, eat some snacks and learn about the gospel. Dozens of children, as well as some parents, turn out for the event each week.

The Looneys arrived in Honduras with their two children—Drew, 11, and Austin, 4—in the summer of 2016, and they still find support and love from their church family at Life Point, O’Fallon. The Missouri church supports the Looneys with prayer and finances, but they also remind them constantly that they’re not forgotten.

“That’s one thing that is a big attack on the mission field—the feeling that you’re forgotten,” they said. For that reason, text messages from church members and watching Life Point Pastor Eric Darst preach online are an encouragement. Also, Alicia said, “Mail is a big deal. To get a card from back home makes you feel, ‘Ok. You’re not forgotten.’”

The Looneys asked that Missouri Baptists pray for their family and ministry. Specifically, they requested prayer for the following:

“There’s so many times down here where you feel like you’re surrounded by the enemy,” Alicia said. Spiritual warfare is amplified by the day-to-day struggles—for example, being without electricity or hot water for a few days, or sometimes having to scrape food together when money is low.

But even in these circumstances, Jon said, they’ve found “peace because of people’s prayer.”

“We’ve experienced God’s peace here,” Alicia added, “and just knowing that people are praying for us every day is a big deal for me.”