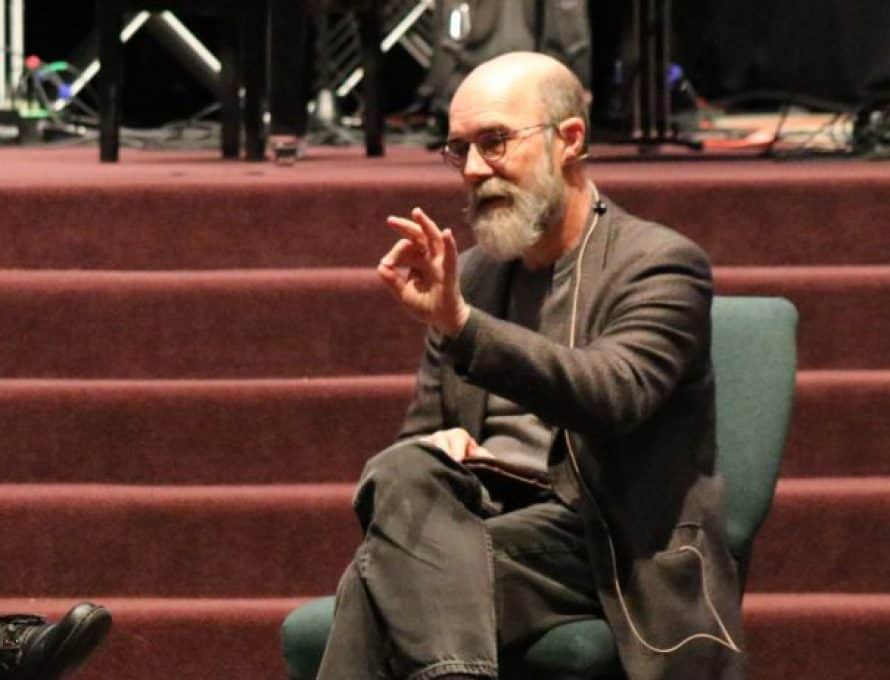 SPRINGFIELD – Michael Card was a featured concert artist during the Great Commission conference and conference organizer Matt Kearns hinted during the introduction that many below age 30 would not know him.

But many who listened to contemporary Christian music in the 80’s and 90’s were searching their memory banks, using Google on their phones and recalling songs like “Love Crucified Arose, Emmanuel and El Shaddai” which were coming up on the discography of Card’s web presence.  Memories of Christian songs playing on their radios and in their dorm rooms were coming back.

At age 60, Card doesn’t look like the guy on the record album covers and cassettes of the baby boomer’s college days, but hey, those baby boomers don’t look the same either!

Younger people at the conference were being introduced to this artist from their parent’s generation.

Card played a couple of concerts during the conference and led a popular breakout session on Scriptural basis for worship music.  He refers to it as “Biblical imagination.”

His website describes Biblical Imagination by quoting a poem by him from his book The Bridge:

The fact is Truth must travel, if it ever will be told”

In his concerts he would masterfully complete an imaginative Biblical scenario painted with words and music as he puts his audience into the mind and heartbeat of characters like King David of Israel, Hosea, Gomer and the Apostle Paul.  He explained Biblical words like the Hebrew term “Chesed” (Loving-kindness), sin, sorrow and forgiveness in a way that made them come alive in the minds of the audience.

Weaving songs and Bible stories together he connected with his audience as he went back and forth from the baby grand piano to his custom-made Martin left-handed guitar.

And at the end of the concert, the line stretched around the front of the front pews.  To the surprise of this Pathway reporter, waiting to interview him, the line was mostly young people of high school and college age wanting to meet him and tell how they appreciate him.

One young lady, with misty eyes, told Card that she had listened to him all of her life.  Her mother, standing next to her explained that she had used Cards’ albums as lullabies as the girl had grown up.  Now about 16, the young girl was meeting the man who had sang her to sleep in years past.  Card encouraged her and posed for a photo with the girl and her family.

Card said he started playing professionally in college and released his first album in 1981. He has since recorded 37 albums and had 19 #1 hit songs on the Christian music charts. But in spite of music success he says he gets most satisfaction from teaching the Bible and explaining the Scriptural backgrounds that inspire his music.

“Music is the water you wash people’s feet with,” he said, referring to Jesus’ way of serving His disciples feet at mealtime.

Conference attenders had mixed reactions to Card’s music and ministry.  While many seemed to appreciate his depth and genuine spirit a few just didn’t seem to “get into it” and many times it was not the very young who responded that way.  Some just couldn’t quite place if they had heard Card’s music before or not.

One young pastor spoke about the challenge of integrating modern music with traditional music in a typical Baptist church.  “We have some that want to explore (modern worship music) but want to be sensitive to the body,” said Mark Spradley, pastor of Enon Baptist Church, near Dawn, Missouri.  “But we all need to be sensitive to the Holy Spirit (in worship).”

Spradley moved to Missouri two years ago from Florida and pastors the small northern Missouri congregation.

Asked what completes the worship experience for him, he replied “I like a variety of music. But for me it is the authenticity of the heart behind it. You can tell when they are authentic.  You can see a passion when they deliver.”

Thinking back to MBC Making Disciples catalyst, Matt Kearns’ introduction of Card at the conference opening, it becomes clear that even through an artist has not been in the limelight for a few decades, their authenticity and commitment to bring Scripture to life through music and teaching bridges that gap quite effectively.