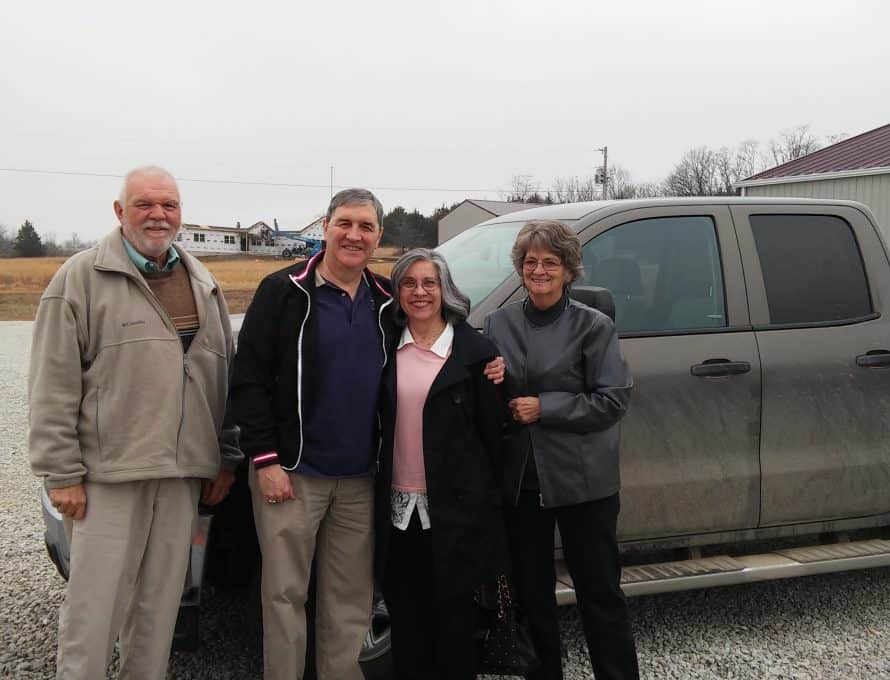 WARSAW – He arrived at the rural church with his sword in-hand and a purposeful determination on his face. Thoughts of a circuit-riding preacher of the frontier era came to mind, though only for a passing moment as this Bible-yielding clergyman arrived in a climate-controlled club cab pick-up truck rather than on a horse and saddle, and his doctrine was Baptist, not Methodism most akin to those early riders.

Poplar Baptist Church was the second of three stops on the route this particular January day, and joining the prayer warrior were three other like-minded believers, all with hearts prepared to participate in fervent prayer alongside the church pastor and a deacon and his wife.

Director of Missions (DOM) David Mifflin is the wandering clergyman, now in year three of a Prayer Journey program he established for the 31 churches in Fellowship Baptist Association (FBA), which has been his territory since 2009, headquartered in Warsaw.  Mifflin implemented the Prayer Journey after hearing a couple of his peers share the concept at a regional DOM training meeting.  He tweaked the idea to best fit the needs of FBA and his calendar, and is pleased with the results.

“The Prayer Journey has been one of the most rewarding experiences of what I do,” Mifflin said. “One Thursday a month, Jim, sometimes Jean, Judy (the association staff) and I will visit two or three of our churches. By the end of a year, we will have visited all of the churches in our association.”

His goal is to visit every church in the association once a year. Some of these trips are day-long journeys as FBA spans four counties with the furthest church more than 50 miles from Warsaw.

Much like other prayer visits, his Jan. 19 itinerary included three churches in the Warsaw community; all within about a 15 mile radius of his office, which was a good idea given Missouri’s unpredictable weather. Prior to the visit, Mifflin sent a letter to each pastor with a time and date, along with an explanation of the intention of his visit.

Mifflin said the pastors are genuinely encouraged through the Prayer Journey program, which is in turn uplifting to him and his staff. He values the time he spends with each church, and it has proven to be a worthwhile way for him to personally connect with each church in the association.