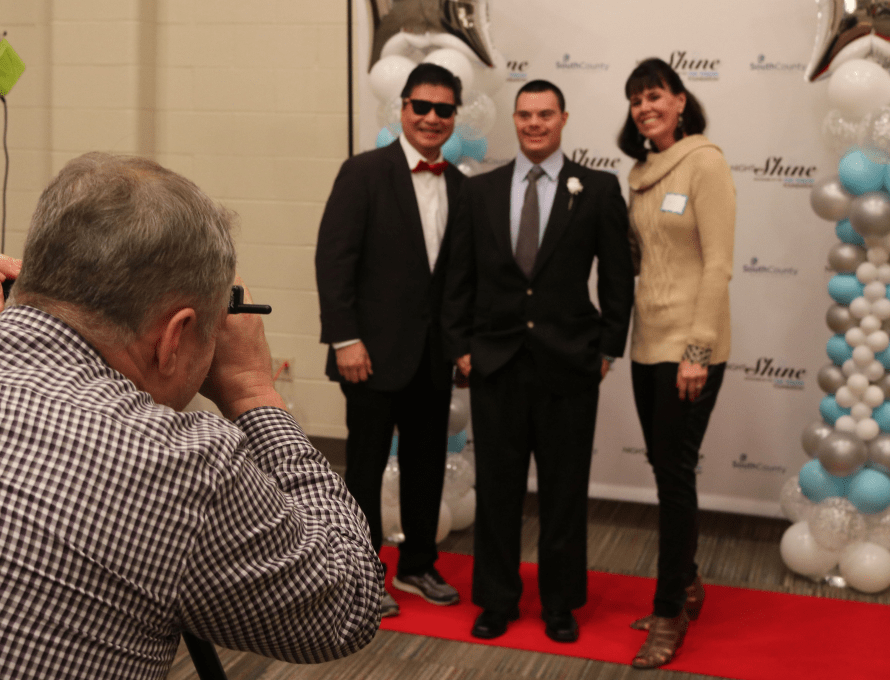 ST. LOUIS - Ed Moncada, a member of South County Baptist Church and an MBC collegiate missionary, poses with his buddy for the night, Brandon, and Brandon’s mother. Brandon was one of more than 100 special needs “VIPs” to attend Night to Shine at the church. Pathway photos by Brian Koonce

ST. LOUIS – It’s not unusual for churches to roll out a figurative red carpet, but South County Baptist Church here literally rolled out the red carpet for 107 “VIP guests” Feb. 10, complete with “paparazzi.”

The church also hosted limo rides, hair and makeup stations, corsages and boutonnieres, shoe shines, professional photography, dinner, a DJ, karaoke and a dance as part of Night to Shine, a partnership between the Tim Tebow Foundation and 375 churches worldwide to provide an “unforgettable prom night experience, centered on God’s love,” for people with special needs ages 14 and older.

Phil Spears, minister of administration and education at South County, helped coordinate nearly 100 volunteers from the church who helped the night go off without a hitch.

“God loves us regardless of our abilities,” he said. “We wanted each of these people here tonight to know that God loves them and we love them. We want each family to have a fun night that they won’t forget, but we also want them to know the love of Christ as well.

As part of Night to Shine, each special needs “VIP” was paired with a “buddy” from the church to guide and usher them through the evening. Family were welcome to take part in the festivities with their VIP, but they also had a break room where they could enjoy the evening on their own while the church took care of the rest. By the time all the guests, their families and volunteers arrived, the church was full.

The Tim Tebow Foundation, which bears the name of Heisman Trophy winning quarterback and outspoken evangelical Christian, Tim Tebow, helped the church coordinate with local businesses to ensure that each guest at South County got a chance at professional hair and makeup, as well as a catered buffet and limo rides.

“We had five different restaurants and four or five salons that heard about it and wanted to know how they could get involved,” Spears said.

More than a year ago, Spears, who follows Tebow on Twitter, saw a tweet about Night to Shine, and saw it as an opportunity the church had to grab. They were too late for last year’s Night to Shine, but they applied to the Foundation and have been planning for this year’s event since then.

Spears said he believes the church will absolutely host Night to Shine again in the future.