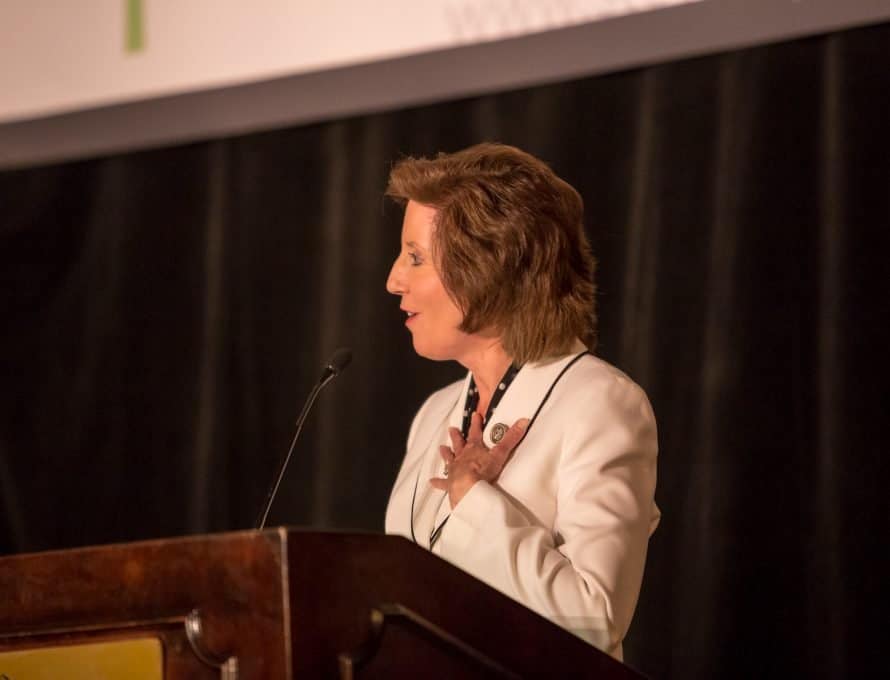 EDITOR’S NOTE: This article was first printed in the Missions & Ministry Newsletter of the Blue River-Kansas City Baptist Association. It is reprinted here with permission.

KANSAS CITY – The weathermen were predicting the largest ice storm in Kansas City in a decade. The grocery store shelves were bare; the roads unusually quiet as darkness settled over the city.

But darkness cannot overcome the light. Despite the hazardous conditions predicted to begin late Saturday evening, Jan. 14, more than 300 people gathered to say “Not in Our City” to human trafficking at the 3rd Annual Hope Now Freedom Gala for the Restoration House of Greater Kansas City (RHGKC).

Launched in 2015, the Restoration House exists to bring hope, healing, and restoration to survivors of human trafficking. They are the only faith-based residential program in the area. In their first 18 months, they have helped 22 women on their journey to recovery.

As with any nonprofit, fundraising is absolutely crucial to the fulfillment of their mission. For the third year in a row, the Gala did not disappoint. This year’s Gala began with a VIP Social on the rooftop of the Intercontinental Kansas City at the Plaza. Guests sipped hot beverages while taking in the breathtaking view of the Plaza Christmas lights. Christine McDonald, a survivor of human trafficking and Program Director of RHGKC, signed copies of her recently released book, The Same Kind of Human, alongside former Kansas City Royals player Willie Mays Aikens, who signed copies of his book, Safe at Home.

The silent auction and Gala dinner took place down in the elegant Ballroom of the Intercontinental. The array of auction items included hand crafted coffee tables, Royals tickets, tailor-made suits, and more. Guests bid online through a mobile bidding app throughout dinner.

Melony McKaye from Life 88.5 served as the Emcee for the second time this year. The entire program, which included a mix of live speakers and video testimony, inspired, evoked compassion, and challenged us to remember that simple acts of kindness and generosity have the power to accomplish great good.

Dr. Rodney Hammer, Board President of RHGKC, presented the second Cry Purple Award to Congresswoman Vicky Hartzler for her exemplary work sponsoring instrumental legislation aimed at combatting human trafficking. In her speech, Congresswoman Hartzler painted Restoration House as a beautiful fulfillment of the Scripture in Isaiah 61:1, as this ministry brings good news to the poor, binds up the brokenhearted, proclaims liberty to the captives, and releases those who are bound.

Christine McDonald shared how the vision for Restoration House came to be through a video that was recorded on the very same steps where she and other prostituted women once sat. She described how they would sit there, weary and defeated, aching for a life beyond prostitution, wishing “there was a place for girls like us.” Now, decades later, her words have come full circle – Restoration House is the place for girls like her. This fulfillment was evidenced by the video testimony of a formerly trafficked young woman whose life has been restored through the work of Restoration House.

Evoking such inspiration through stories of generosity and transformation provided the perfect segue for Auctioneer Gib Thurman to climb the bids as high as he possibly could for the 5 live auction items: a trip to Ireland, a custom diamond necklace, a Steamboat Springs Getaway, a Cancun Paradise Adventure, and a one-of-a-kind 1970 Super Bowl Champion Chief’s Autographed Picture.

When the last item had sold, the last bite of cheesecake consumed, and the last speech given, over $140,000 had been raised to shine light into the dark places of human trafficking, exceeding the goal of $100,000 by 40%.

As guests drove home on the ice-free streets, the twinkling Plaza lights bespoke a visual reminder that when we let compassion and generosity shine through our hearts, the light pierces through the darkness, and the darkness cannot overcome it.