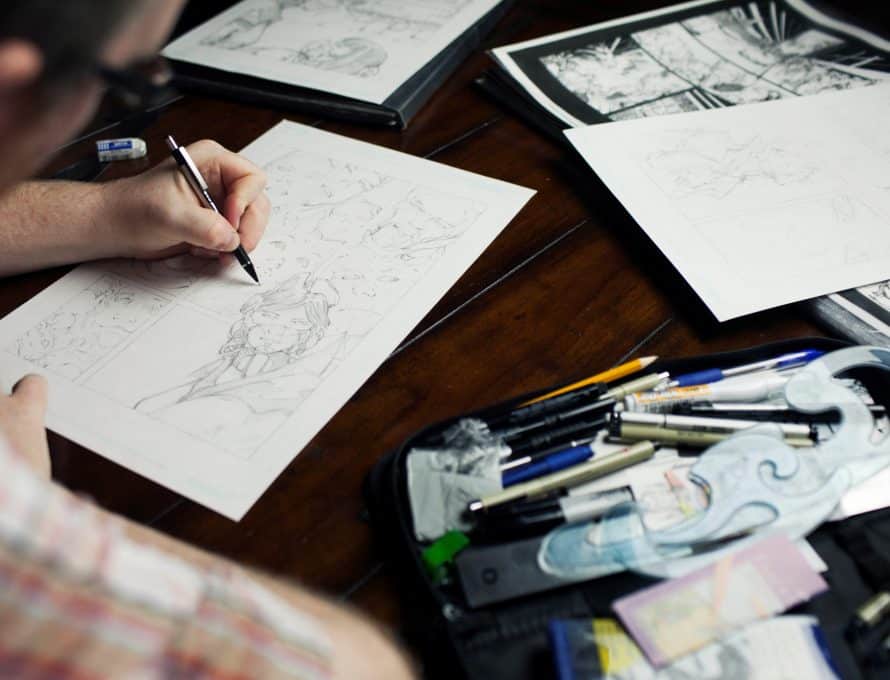 LOUISVILLE, Ky. (BP) – Late at night in his kitchen – or whenever the father of four can spare a moment between fulltime employment and doctoral studies – Chad Nuss is sketching, weaving his epic worldview adventure “The Silence.” He launched the first issue in June 2016 after a successful Kickstarter campaign to raise funds for publishing and distribution.

Set in the fictional Prolegomenon System – consisting of 12 planets that each manifest specific worldviews like existentialism, nihilism and dualism – The Silence follows two characters, Naomi and Lazarus, as they explore the universe. Beset with physical weaknesses, Naomi is angry at God for her blindness and Lazarus is angry at mankind for his lung condition, which Nuss said comprises the fundamental aspects of worldview – knowledge of God and of man. Creating flawed heroes, Nuss said, yields a complex, redemptive narrative featuring “relatable people who are wrestling with questions that everyone asks.”

“These characters are trying to find answers about God and about life and they keep looking into creation but they can’t find it,” Nuss, a doctoral student at Southern Seminary, said. “What I’m trying to do in the book is show why these worldviews don’t work, like what Francis Schaeffer did – drawing them out to their logical conclusions.”

For those who are skeptical of comic book storytelling, Nuss points to the pervasive and growing influence of the industry in mainstream culture. In the past five years, the comic book industry has seen a dramatic resurgence, with its print and digital market value last estimated at $1.03 billion in 2015, and yet with virtually no Christian influence.

“The Christian story is countercultural, so you have this huge opportunity to use that popular medium for influence,” said Nuss.

Similar to John Bunyan’s “Pilgrim’s Progress” or C.S. Lewis’ “The Chronicles of Narnia,” Nuss said he wants to tell a profound and sophisticated story by taking his story to a different world with issues parallel to our own, hoping readers return challenged in their worldview assumptions and influenced to think about the Gospel.

“Theology should always drive you to love God more, and the arts help you to do that because it brings together the aesthetics with deep philosophical ideas,” Nuss said. “Beauty is a very important part of theology.”

Though he didn’t have a personal faith in God, Chad Nuss was incredulous as his father stood firm in atheism before dying from lung complications in 1996.

Nuss experienced an existential crisis, sensing that family and friends were wrong when they said that his father was “in a better place.” Not having grown up in church, Nuss said his knowledge of God extended only to what he perceived in creation, alluding to Romans 1 in the New Testament.

“Look at the stars. How can you say that there’s not a God?” Nuss had asked his father.

Now, 20 years later, the artistically-inclined Nuss is the creator of the planned 12-volume worldview comic book series,  and a doctor of philosophy candidate in Southern Baptist Theological Seminary’s Billy Graham School of Missions, Evangelism and Ministry. He’s also a fulltime culinary manager and father of four.

“I came to the conclusion that all the other religions and philosophies were teaching me how to get to God, but Christianity teaches that God comes down to us,” Nuss said of his profession of faith in 2000 in an interview with Southern Seminary Magazine. “All the other religions were telling me to make myself a better person, but I realized that I’m the problem and I can’t fix myself, that Christ came down and died for me.”

When Nuss moved back to his native Canada for art school, he and Rose exchanged letters to continue their Gospel conversations. Rose knew of Nuss’ artistic abilities and sent him a copy of Francis Schaeffer’s How Should We Then Live? in which the apologist examines the effects of humanistic worldviews on art and society throughout Western history. Nuss had already begun exploring various philosophies and world religions in his search for truth and found Rose’s correspondence to be crucial in leading him to an understanding and belief in the Christian faith.

“Learning about worldview really helped me articulate the Gospel in a way that’s compelling and confrontational with tact, being gracious and truthful at the same time,” Nuss said. “I’ve got to show them the holes in their worldview and how Christ is the better answer.”