The Executive Board of the Missouri Baptist Convention has approved Cooperative Program allocations for a three-year period, based on the recommendation of a CP Allocations Task Force appointed earlier this year by former MBC President Neil Franks.

Beginning in 2018, the MBC allocates a simple 40 percent to the Southern Baptist Convention and 60 percent to the MBC and its ministries. While the actual dollar amount sent to the SBC remains largely unchanged from the 2016 budget, the percentage is held at a constant 40 percent, rather than rising slightly each year.

Meanwhile, in its 60 percent, the MBC absorbs all items previously designated as “shared items” — five percent of the total budget that includes publication and distribution of The Pathway, and GuideStone protection and benefits for Missouri Baptist pastors.

Overall, the approved allocation is designed to better match CP giving in Missouri to the ministries Missouri Baptists support in the state and beyond its borders, according to MBC Executive Director John Yeats.

In 2012, the Executive Board advanced a goal for allocating CP funds contributed in Missouri to a 50/50 split between the MBC and the SBC by the year 2020. “This was an aggressive goal aimed primarily at helping the SBC’s mission-sending entities improve their efforts to take the gospel to the ends of the earth,” according to newly elected MBC President Ken Parker.

The goal also was contingent upon a corresponding increase in CP giving from affiliated local churches to offset funds being sent outside the state.

“The reality is that, while Missouri Baptists invested half a million dollars more in the SBC in 2016 than in 2011, CP giving from the churches in the state has grown much more slowly than expected,” said Parker. “This factor, and other factors, make the 50/50 model unrealistic.”

The CP Allocations Task Force appointed by Franks met this summer and fall to evaluate the manner in which CP dollars in Missouri are allocated to the SBC and the MBC, and to make a recommendation for allocations beginning in 2018. 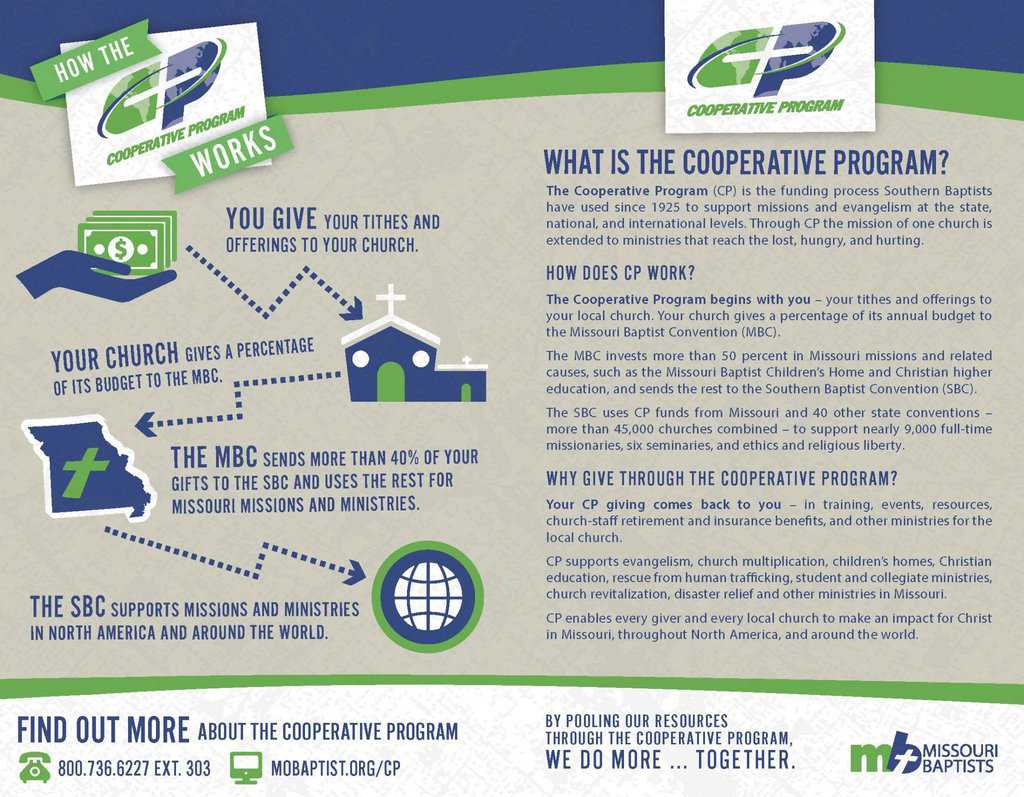 In presenting its report to the executive board, the task force highlighted a number of historical realities:

(1) The SBC’s general call in 1925 to local churches and state conventions to move toward 50/50 splits with their budgets was made with sincere intentions to advance the gospel around the world. The reality is that the split between state conventions and the SBC has hovered around 65/35 for decades.

At the same time, local churches historically have contributed about 11 percent of their undesignated receipts to the Cooperative Program — a percentage that in recent years has fallen below 6 percent.

(2) No two state conventions are alike. They vary in size and financial obligations. The MBC, for example, currently supports three institutions (the Children’s Home, Hannibal LaGrange University, and Southwest Baptist University), along with two commissions (the Historical Commission, and the Christian Life Commission).

The MBC is the No. 1 private donor to the three institutions — “powerful ministries made possible by the generosity of Missouri Baptists,” according to Dr. Anthony Allen, president of Hannibal LaGrange, and a task force member.

(3) The MBC currently claims five percent for “shared items,” which flow back to MBC churches supporting CP and local church ministries. This five percent is taken off the top, before funds are allocated to the MBC or SBC.

(6) The MBC has substantially trimmed staff, budgets, and programs to accommodate the decrease in funds allocated to state-convention work. With 46 full-time staff, the MBC today has half the personnel devoted to state ministry as in 1999.

(7) The MBC shoulders a greater portion of the financial impact of returning entities. “Missouri Baptists welcome back the Missouri Baptist Foundation,” said Yeats, “and we have asked the Cole County District Court to grant summary judgment in our favor concerning the Baptist Home and Missouri Baptist University. At the same time, bringing back these entities means investing in them for the sake of the Kingdom — additional funds not currently allocated.”

(8) Strategies of SBC mission entities are fluctuating. The North American Mission Board (NAMB), for example, has significantly reduced its investments in state conventions. For Missouri, that means a drop from $857,000 in 2014 to $300,000 in 2016. Included in this adjustment is the reality that the MBC must now pay the full salary, medical, and retirement benefits of eight state missionaries that once were jointly funded with NAMB. In addition, the MBC must underwrite the full cost of collegiate summer missionaries, disaster relief, and language missions.

(9) The International Mission Board (IMB) and NAMB receive more than 70 percent of CP funds allocated to the SBC, noted Spencer Plumlee, MBC Executive Board member and newly elected trustee for the IMB. These organizations also have significant sources of funding outside CP, such as legacy gifts and access to i