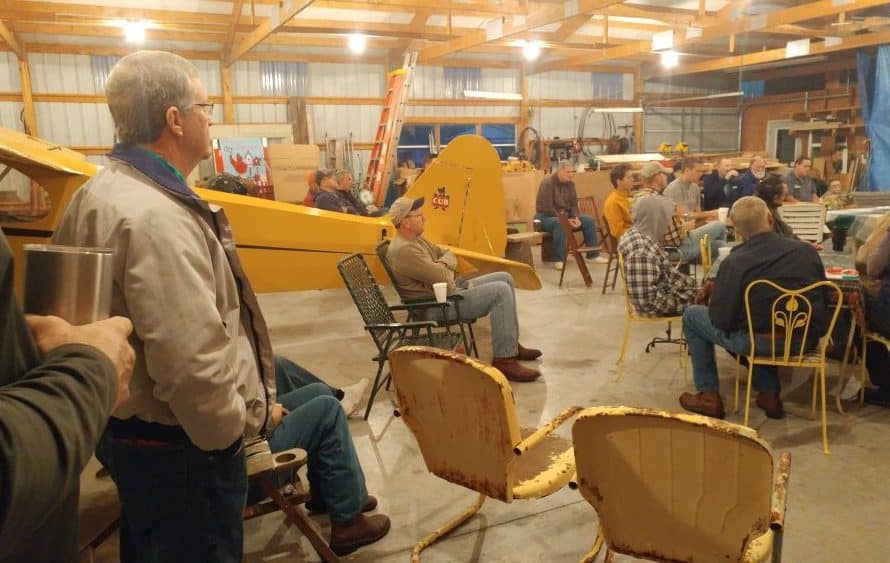 CLINTON - A group of men gather at the Tom Spooner’s hangar to talk “about what we need to hear with no spin” early on the first Saturday in November. Pathway photo courtesy Tom Spooner

CALHOUN – You don’t need to be inside a church’s auditorium to hear the truth. Sometimes, pulling up a lawn chair next to a 1945 Piper Cub in a small , unfinished hangar will do just fine.

That’s what been going on at “Hangar Hangouts,” a disciple-making ministry of sorts for men and boys hosted by Tom Spooner, a member of First Baptist, Clinton.

“There are some folks out in this world – basically men – who do not want to go to church to hear anything,” Spooner said. “They figure they’re going to get beat up over the head with a Bible. They’d rather go deer hunting, fishing, or even sit at home playing solitaire. What I’m trying to just get men together to talk about what we need to hear. Not talk to us; with us. No spin, no garbage, just what we need to hear and do as Christian men.”

So at 7 a.m. on the first Saturday of each month, Spooner provides a place for just such a conversation. His wife, Sandra, provides the coffee and sweet rolls, and Spooner brings in a discussion leader, which so far has included an IMB missionary home on furlough and Pathway editor, Don Hinkle.

“At 7 a.m., it’s too early for soccer or baseball games, and the farmers aren’t even at work yet unless they’re milking, but there’s only one guy left in the county who milks and he’s way up north anyway.”

Spooner, a retired physician, could easily carry on a conversation by himself, but he’s intentional about drawing other men into the informal discussions.

“Men and boys have taken a backseat to a whole lot of stuff for whatever reason,” Spooner said. “We’ve got to figure out how to reach the men and boys. You don’t talk astrophysics to a ditch digger and talk ditch digging to a astrophysicist. You’ve got to be on the right frequency to communicate. We’re trying to talk on men’s frequency, not over, under or around them.”

Although these hangouts are happening outside the small town of Calhoun, Spooner sees no reasons why similar conversations can’t happen across the state and country; informal, casual conversations where truth reigns, “not spin” about living a Christian life.

“A lot of folks are very cynical about a lot of folks,” Spooner said. “There’s a lot of anger in the world; people don’t know what they’re mad about, but they’re just mad. If you can get those lines of communication open, you can get the conversation rolling a little bit, expand upon mutually agreed upon facts then steer the conversation from there.”