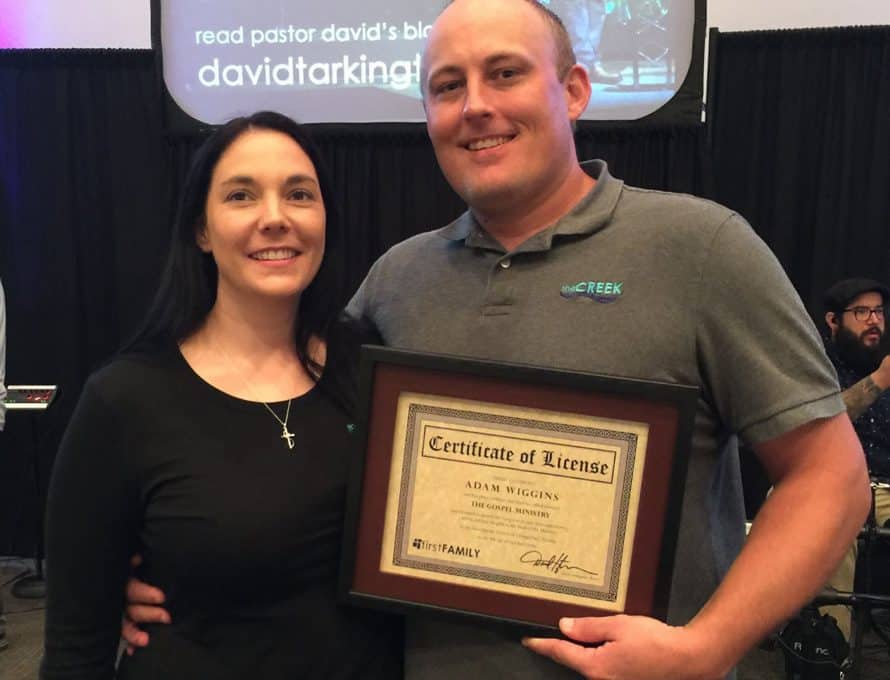 Adam Wiggins, pictured with his wife Sabrina, was licensed to the Gospel ministry by First Baptist Church of Orange Park on Oct. 9. Submitted photo

MIDDLEBURG, Fla. (BP) — It’s not the conventional road to the pastorate.
“I wouldn’t wish [my] story on anyone, but I wouldn’t change anything about it, either,” said Adam Wiggins, campus pastor of The Creek, a new campus of First Baptist Church of Orange Park, Fla., which is just outside of Jacksonville.

Wiggins’ path to the pulpit has been complicated, but it has ultimately landed him on staff with FBC Orange Park leading the church’s newest effort to minister to an unreached community in Middleburg.

But his most notable stops, and the ones that set him apart from so many other pastors, are the ones in prison.

As a young child, Wiggins learned a lot about alcohol and drugs from his father, who was addicted to both, yet still managed to hold down a job and provide for his family. Wiggins didn’t see enough negatives to dissuade him from drinking and using drugs at a young age, and the consequences of that lifestyle led to a few arrests and time spent in prison.

Yet it seems God was at work in Wiggins even then. When he was 10 years old, Wiggins’ mother began going to church, and shortly thereafter she gave her life to Christ. Wiggins said that when his mother walked the aisle during an invitation, he followed her. A couple of years later, his dad followed suit and soon quit alcohol and drugs cold turkey, completely giving his life to the Lord.

Wiggins saw the radical changes in his parents, but he had experienced no personal change of his own. By the age of 13, Wiggins realized something was wrong.

At the time, he got no counseling to make sure he understood the decision for Jesus Christ that people thought he was making, so after talking to his pastor Wiggins made what he felt was a real commitment to the Lord, and got baptized again.

But Wiggins struggled to follow the Lord and break away from the destructive patterns of behavior he had already adopted.

“It was so confusing, because I had seen so much with my dad and had started doing things in the neighborhood,” Wiggins said. “It was hard to escape all that because everyone was doing it.”

So he didn’t escape from it but incorporated it into his new life at church, smoking pot and drinking on Friday and Saturday and attending church on Sunday.

At the age of 18, when his parents said he didn’t have to attend church any more if he didn’t want to, Wiggins left his double life behind and embraced the drugs and alcohol, “running and living a fast life.”

That fast life earned him a stay at a Florida prison and a brief stint in a Georgia jail. Yet even in rebellion, God led Wiggins to his wife Sabrina. Four children later, Wiggins found his way back to the Lord and to Jacksonville.

Chris Drum, senior pastor of First Baptist Church of Baldwin, had walked through Wiggins’ turbulent adolescence with him and his family and welcomed Wiggins back to church with open arms. When Wiggins felt that God had more for him to do, Drum began praying about what that would look like and eventually gave him the opportunity to head up discipleship efforts at the church.

From that role, Wiggins felt led to pursue church planting, a role that would combine his passion for discipleship with his desire to serve people. Wiggins connected with the North American Mission Board and after some research and a vision trip to Toronto, he felt that he finally knew what God wanted him to do.

It was decided that Wiggins would have an on-the-job learning experience helping First Baptist Orange Park plant a campus in Middleburg while he raised funds for his new work and the move across the northern border.

However, Wiggins soon discovered his background was going to make it impossible for him to live in Canada. While his dreams of planting a church in Toronto would never be realized, Wiggins noted it was the pursuit of that dream that led him to Tarkington and First Baptist Orange Park.

Tarkington said when he and Wiggins first drove around the Swimming Pen Creek community of Middleburg, it was immediately apparent that Wiggins felt an affinity for the community.

“He said, ‘These are my people,’ ” Tarkington recalled.

Drum said while there was a time when he never would have imagined this future for Wiggins, part of him is not at all surprised that Wiggins is planting a church.

Wiggins believes his rough background and life experiences put him in a unique position to reach certain people who feel that they’ve done too much for God to forgive them. He has also seen how his past can sometimes be an obstacle. Some family and church members have been unwilling to believe his change was genuine. But Wiggins said he is grateful that many have come around over the years.

“I had done bad things, I get it,” he said. “But for every one of those [who doesn’t accept that I have changed] there are 10 people with open arms.”

Drum said Wiggins’ story is a reminder to him to never give up on someone.

“Keep on praying,” he said. “God is in the miracle-working business.”