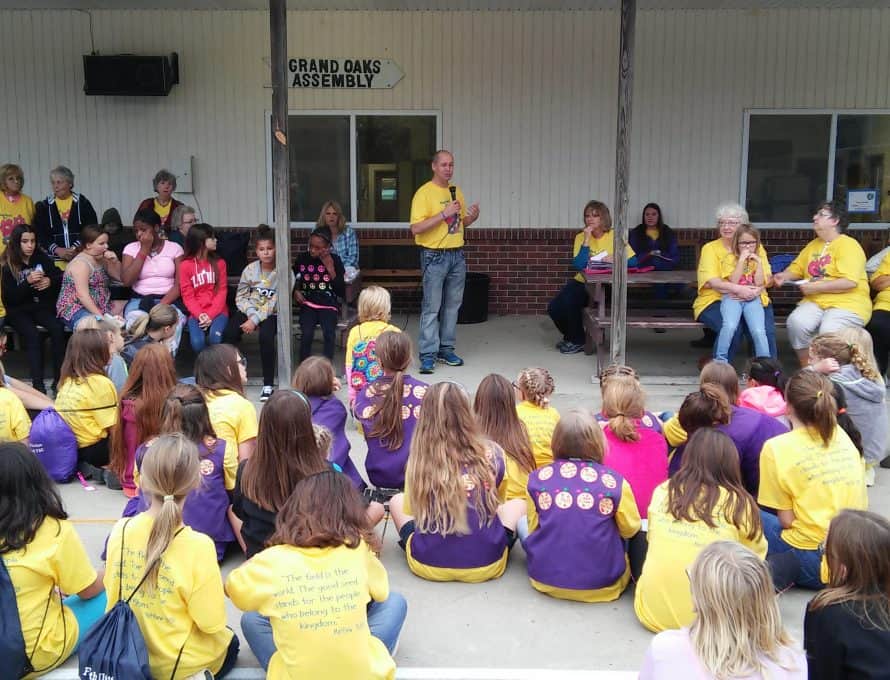 CHILICOTHE – Church Planter Shane Stamm shares morning devotion with girls and leaders at one of the five recent GA Retreats, this group was at Grand Oaks Camp in Chillicothe. Photo submitted by Tammie Nichols

JEFFERSON CITY – Wide-eyed peers looked on as an emotional yet confident 10-year-old Kaylee walked the aisle in the little camp chapel and invited Jesus into her heart. It was during the witness conference that Megan understood her need to accept Jesus and talked to her leader. Ginny talked to her mom about what she heard at GA Retreat and gave her heart and life to Jesus that night. Following GA Retreat, 7-year-old Lola told her best friend that God loves her, giving her a Bible on the school bus.

These are just a few examples of the seeds that took root at the Girls In Action (GA) Retreats held Oct. 14-15 and Oct. 28-29 at five Baptist camps across Missouri. Many more seeds were planted among the nearly 500 girls and leaders in attendance.

GA is a mission discipleship organization available to churches through Woman’s Mission Union, and is designed for 1st-6th grade girls. Directing the retreats for our state is Missouri WMU Preschool/Children/Student Missions Consultant Teri Broeker.

Planted in Missions was the theme for the recent retreats, and Matthew 13:38 was the focus verse, “The field is the world. The good seed stands for the people who belong to the kingdom.”

The theme and focus verse were expounded upon in seven conferences led by volunteers, retired state and international missionaries, and church planters.

Witnessing was among the conferences, Broeker said. The plan of salvation was explained to the girls using the colors red, black, white, green and yellow. As a visual aid and personal witnessing tool, the girls crafted paper carnation hair bows using these same colors. Other conferences focused on the cooperative program, lessons from Esther, prayer, games, missions, and church planting.

The weekends included several General Sessions of music, worship, skits and games, and activities such as a scavenger hunt, and morning and evening devotions. Church planter shared how God is using their ministry to reach out in their communities. Retired missionaries told how God is using them, after returning from the mission field.

“Many seeds were planted during the retreats,” Broeker said. “I am convinced the more we cultivate interest among our children through mission organizations such as GA, the more crops we can expect to harvest in the future.”