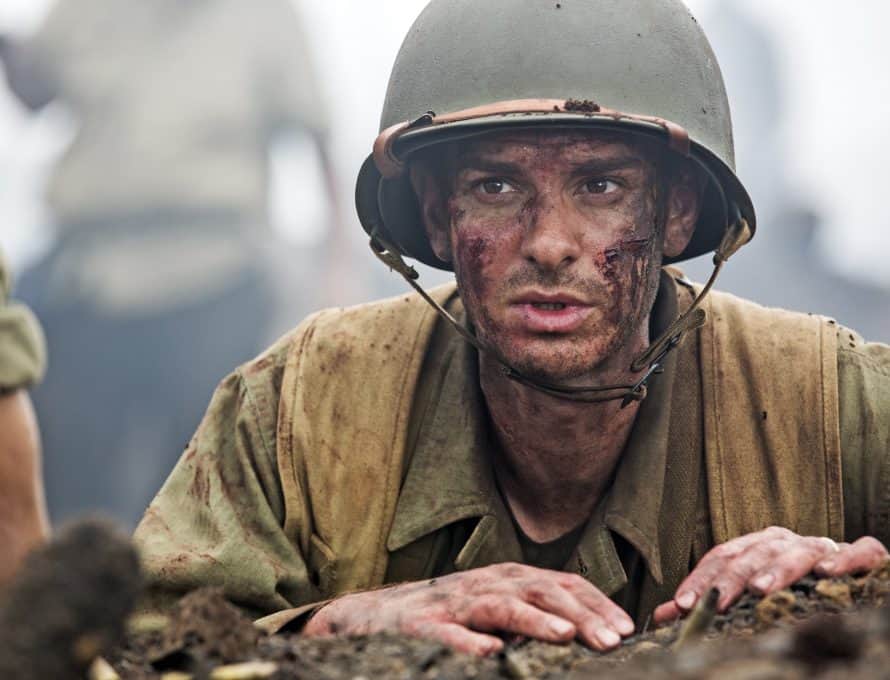 I have never been in the military. In fact, the most I can say is that I am a veteran of many a war movie. But Hacksaw Ridge, just like the Pacific campaign in World War II, is a whole ‘nother (movie) theater of war.

What makes it different is that its real-life hero, Desmond Doss, is a conscientious objector (“I like to think of myself as more of a conscientious cooperator,” he tells his commanding officer) and feels bound by God never to touch a weapon. Doss is a patriot who takes the bombing of Pearl Harbor personally, yet as a devout Seventh Day Adventist, he seeks to honor his commitment to the Lord and his interpretation of “thou shalt not kill.”  This places him in a unique position: caught between his role as an American who loves his country and believer who would rather be court martialed and sent to Leavenworth than act contrary to God’s will for his life. The movie version of Doss (Andrew Garfield), just like the actual man, was beaten, ridiculed, punished and called a coward because of his beliefs. You may not fully agree with his theology, but Doss is far from a coward.

It’s not a stretch to see a parallel between modern American Christians’ and Doss’s situations. Thanks to laws and a Constitution that protect religious expression and exercise, military officials reluctantly determined that freedom of conscience can trump a direct order to pick up a rifle and fire. Likewise, the First Amendment and other religious liberty statutes should be seen as absolute protection for Christians’ beliefs and religious exercise, even as we gladly live out American ideals in commerce and the public square without even a hint of compromise.

The charges against Doss were dropped (unless, he makes it to war, there wouldn’t be a movie). His Bible in his breast pocket, Doss stormed the cliffs of Okinawa as a combat medic next to those who mocked him and questioned his patriotism. It will come as no surprise that he will be called upon to save their lives.

On top of its inspiring story and pro-religious liberty message, Hacksaw Ridge is good movie. Mel Gibson is nothing if not a competent director. Garfield’s silly grin and molasses accent are a winning combination. The movie opens with Garfield quoting Isaiah 40:28-31, and I wanted him to just keep on reading. Hugo Weaving creates a terrifying damaged character as Doss’s father, and Vince Vaughn has fun as the gruff and inpatient drill sergeant. The love story is as chaste and innocent as has ever been.

The movie ends with an actual interview with Doss, who passed away in 2006. This inspired me to search out other interviews with the man, including a 2004 documentary called “The Conscientious Objector.” The real Doss was a humble man, yet I don’t think he’d mind his story being told in Hacksaw Ridge. In his words: “When there are explosions and bullets so close you could practically feel it, I should have been killed a number of times. I know Who I owe my life to. That’s why I tell this story: for the glory of God.”

Note: Hacksaw Ridge is rated R “for intense prolonged realistically graphic sequences of war violence including grisly bloody images.” This is an understatement. As I mentioned, I’ve seen many a war film and this surpasses them all in terms of violence. Though the carnage is not glamorized, the sight of that many missing limbs, exploding heads, and dangling intestines will be too much for many. There are two instances of a naked man’s backside during basic training. There is some language in the movie, but is it a tiny fraction of the average war film. I could be wrong, but I do not recall any instances of the Lord’s name being taken in vain. Just like a war hero who never fires a shot, that is a rare feat.