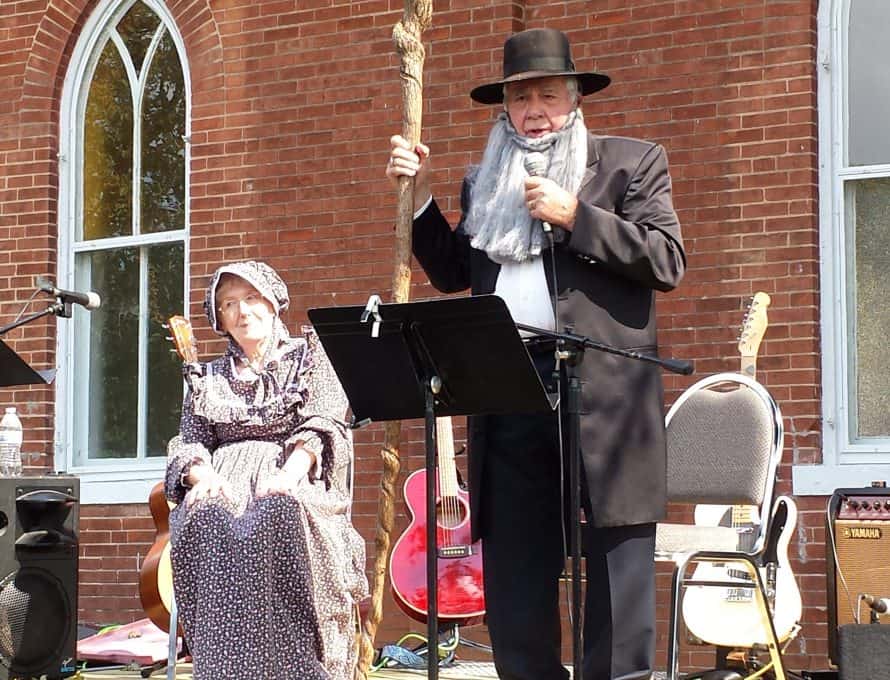 PIKE COUNTY – How does a Missouri church “in the middle of nowhere,” according to its current pastor, survive for 200 years?

To Ramsey Creek Baptist Church Senior Pastor John Bateman the reason is clear: “Anything the Lord’s not involved in or not approving of will die.”

The church recently celebrated its 200th anniversary by hosting a weekend party that included old time gospel music, sermons by former pastors, lots of activities—from bounce houses and community dinners to an animal petting zoo and face-painting—and the church’s early history retold by its first pastor…at least through an impersonator.

Ministering in an area for 200 years is significant—even more so when the church isn’t attached to a metropolitan area. “We’re out in the country,” Bateman said. “We’re really in the middle of nowhere.”

Ramsey Creek church, located in Pike County along the Mississippi River, was sparsely populated 200 years ago and it’s still that way today. U.S. Census figures put the county population at less than 20,000 residents.

Hannibal is an hour to the northwest; St. Louis is 1-1/2 hours to the southeast. Yet, with a regular Sunday morning attendance of 150-180 members Bateman said the church’s membership is up from 100-120 since he became senior pastor in 2009.

“Because this church has continued this long, it means this church is alive…It’s alive in Christ,” Bateman said. “It’s Christ-centered here.”

A review of early church meeting notes shows Ramsey Creek from its start was intentional in promoting Christ in the region.

Bateman said the church’s first pastor, Stephen Ruddell, was burdened for Indians and that brought him to Missouri. While Ruddell was a young boy, Shawnees attacked the family’s Kentucky settlement and he was kidnapped.

He grew up as a brother to the great Shawnee chief, Tecumseh, and later married an Indian woman. In adulthood he returned to Kentucky, found Christ, and after his wife died moved to Missouri to begin his ministry in 1813.

The church was formally established in 1816 but its building was used by various denominations since the Baptists met only once a month.

So more people could be reached for Christ, Ruddell also “established churches in different places,” Bateman said, “about four or five churches in this area.”

Church and Salt River Baptist Association records note the church continued to plant and support churches in the region during the 19th and 20th centuries.

According to a Salt River Association history published in 1909, Ramsey Creek was racially inclusive from its start. The publication notes that before 1843 blacks “were received into the fellowship” and the result was “a very large part of the additions to the church were colored people.” In 1845, Ramsey Creek licensed two black members to preach the gospel.

Ramsey Creek’s vision to develop followers of Christ extended well beyond its community. In 1884 the church helped found the Baptist Sanitarium, which today is the large Missouri Baptist Health Center in suburban St. Louis.

“It is Christian to care for the body and thereby we may reach the soul of the one who knows not our Lord,” drove the church’s hospital support, notes the 1909 history of the Salt River Association.

“It’s a church that realizes a need not only to reach out in the community but to reach out to the world,” Bateman said. “That’s the way they’ve been taught. It’s been like that for 200 years.”

“In more recent years we’ve planted two churches and we’ve sent out missionaries to India, Romania, Ukraine, Haiti” in short-term projects of up to six months, he said.

Today, the church’s outreach includes renting an American Legion hall in nearby Clarksville for “Bible studies down there on Wednesdays. And we have our Awana program down there.”

“It’s a church that’s focused on making disciples,” Bateman said, and he doesn’t see that change as Ramsey Creek begins its 201st year.

“We’re going to basically do the same thing we’ve done for 200 years but with more vigor, more zeal.