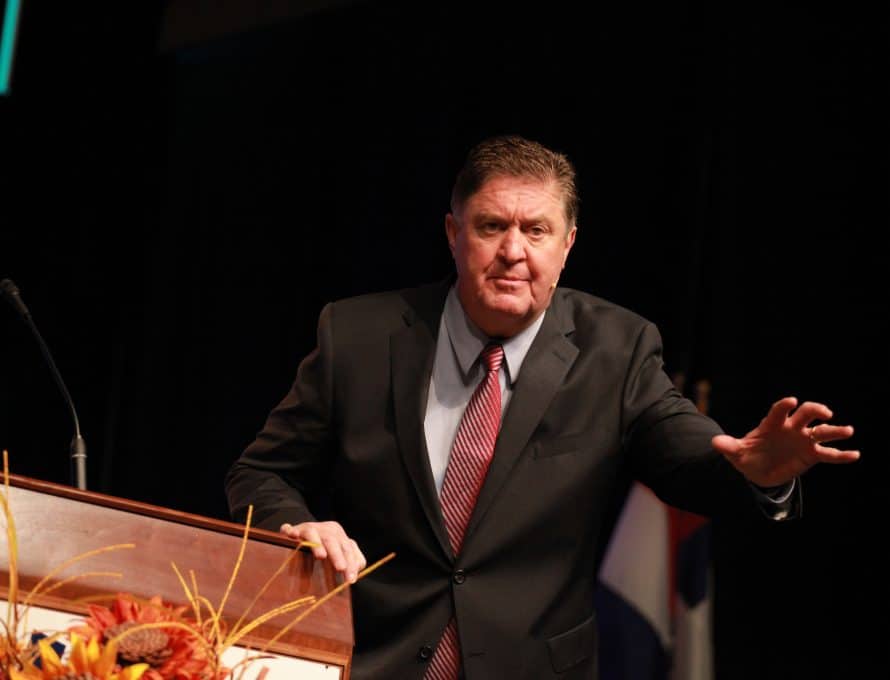 ST. CHARLES –The president of the Southern Baptist Convention (SBC) brought Missouri Baptists’ annual meeting to a close with his sermon based on 1 Kings 19.

Steve Gaines, who was elected SBC president this June in St. Louis and serves as pastor of Bellevue in Memphis, Tenn., told the crowds that many times, there is a spiritual valley after a great victory.

In the passage, Elijah runs from Jezebel and Ahab, hiding in the wilderness. He cries out to God, “I’ve had enough, Lord take my life!” Sustained by an angel with food and water, Elijah walks for 40 days and nights to a cave where God confronts him.

“Literally, Elijah is on the top of the mountain in chapter 18,” Gaines said, “but in 1 Kings 19, he’s in a cave. He’s one of the greatest men in the Bible, anointed of God. And here he was ready to quit and do anything besides the ministry.”

A pastor of 33 years, Gaines offered encouragement to those who may be in a spiritual “cave.”

“I’ve been there,” he said. “I’ve wanted to quit. But I can also tell you God wants you to come out of that cave.”

Fear and discouragement keeps us in that cave, but God’s grace, presence and call offer ample reason to leave.

“God can and will use you anywhere you are in life,” Gaines said, “if you’ll just stop singing the blues, and thinking about yourself. If you’re breathing, God has a plan for you. I don’t care what you’ve been through, God has more for you to do. If you’re not dead, serve the purpose of God.”

“I have been in the cave, and I can remember when Jesus came to my cave and asked, ‘Steve, what are you doing in there? Come on, son,’” he said. “I’d rather be outside of the cave with Jesus than inside without Him. I’d rather have Christ than a cave.”