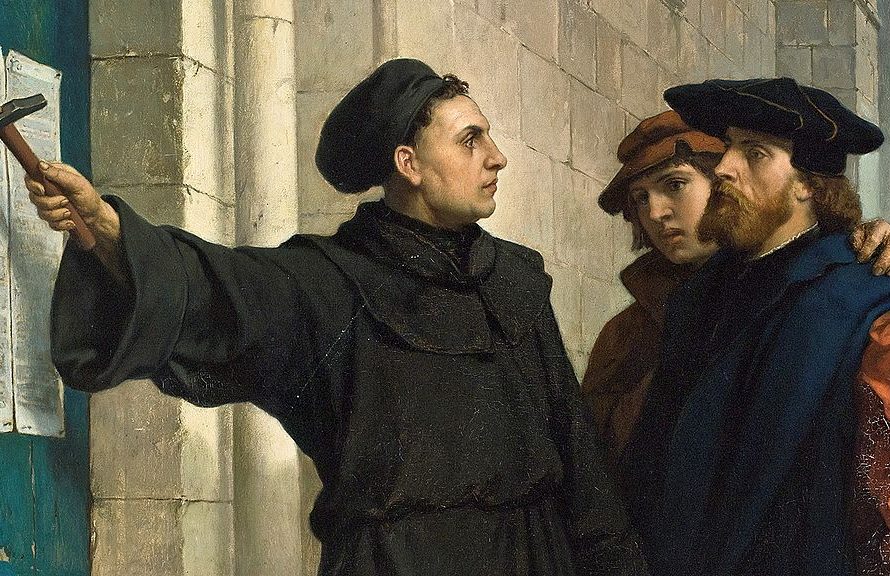 JEFFERSON CITY – Had he used a hammer, one could perhaps say that its sound would reverberate across Europe and, eventually, across the globe.

But contrary to legend, Martin Luther most likely carried no hammer when, on Oct. 31, 1517, he approached the Castle Church in the small university town of Wittenberg, Germany, where he served as both priest and professor. Using paste instead of nails, he posted a set of 95 Theses for public debate on the church door, which served at the time as a community-wide bulletin board.

Earlier that fall, Luther had introduced 97 different – though related – theses to faculty members at the university, and he was met then with some lively discussion from interested scholars and, no doubt, yawns from the others. But not so with his 95 Theses of Oct. 31. Soon, these declarations from Luther’s pen would go to print not only in Latin, the professional language of churchmen and academics, but also in the languages of the common folk—with drastic, and sometimes revolutionary, results.

These pungent theses criticized abuses of church power – especially the pope’s attempt to raise funds for renovating St. Peter’s Basilica in Rome by guaranteeing salvation to all who would simply donate to the building project. “As soon as the coin in the coffer rings, the soul from purgatory springs,” Johann Tetzel, a famed seller of the pope’s salvific guarantees (called “indulgences”), preached as he made his rounds throughout Germany.

In the 95 Theses, Luther decried such cheapening of God’s grace, which distorted and watered down the message of salvation merely to collect cash. Instead, he insisted that the Christian life should be filled with repentance and that the “true treasure of the church is the most holy gospel of the glory and grace of God.”

“Christians,” he wrote in his final two theses, “should be exhorted to be diligent in following Christ, their head, through penalties, death and hell; and thus be confident of entering into heaven through many tribulations rather than through the false security of peace.”

Yet when Luther fastened this message to the Wittenberg church door in 1517, there was no hammer. No nails. No resounding clang or thud. But we have to admit – Luther’s glue worked well. After all, his message has stuck with us for centuries.

In fact, Christians across the globe will celebrate the 500th anniversary of the Reformation that Luther started next year on Oct. 31. But, perhaps for many Christians, the question remains, “Why?” What is this Reformation? Why does it matter for people living in the 21st century? What should we make of it? And, most importantly, what did God have to do with it?

Of course, no one can sufficiently answer these questions without delving into the complexities of history, searching out the story of the Reformation for oneself. For one year, beginning with this issue, The Pathway will present in summary fashion this story. But as Baptist church historian A.H. Newman wrote more than a century ago, any attempt to describe the workings of God during the Reformation defies simple explanation.

“And here we must remember,” Newman writes, “that the cause of God on Earth progresses not in straight lines like a railroad train across yonder prairie, but like yonder tossing ship on yonder surging ocean.” Likewise, any serious investigation into the lives and doctrines of the Reformers—men like Martin Luther, Martin Bucer, Huldrych Zwingli or John Calvin—should at least cure Baptists of “blind hero-worship.” After all, as Newman writes, these very same Reformers who proclaimed Christian liberty “would not have hesitated to urge our extermination by fire, sword, or water, if we had been their contemporaries”—simply because we deny infant baptism and teach that water baptism should not precede a profession of faith.

Here we must remember that God often works through us in spite of ourselves. Newman reminds us that, “owing to the perversity of men,” God’s cause does not make “clear and constant progress,” although it indeed progresses. “Sometimes it seems to lose ground; but, after all, the apparent loss is transmuted by divine alchemy into means of future gain.” And this should be an encouragement for us, as we maneuver the difficulties of our own age.

Luther himself, who tended to see human efforts not only as vain but also often as a joke, recognized that God alone could advance His cause. For this reason, he once quipped that he had done nothing at all to make the Reformation succeed.

“I simply taught, preached, and wrote God’s Word; otherwise I did nothing,” he said. “And then, while I slept, or drank Wittenberg beer with my Philip and my Amsdorf, the Word so greatly weakened the papacy that never a prince or emperor did such damage to it. I did nothing. The Word did it all.”

And, perhaps, this is ultimately why we should celebrate Luther and the rest of the Reformers. For they trusted Scripture to make an impact in their age. Despite numerous obstacles, they endeavored to publish it widely both in print and proclamation. And, without hammer or nails or glue, God’s Word has stuck with us for centuries, resounding across the globe. Such was the core truth of the 16th-century Reformation, and such should be the crux of all our endeavors: “The grass withers, the flower fades, but the word of our God will stand forever” (Isaiah 40:8).