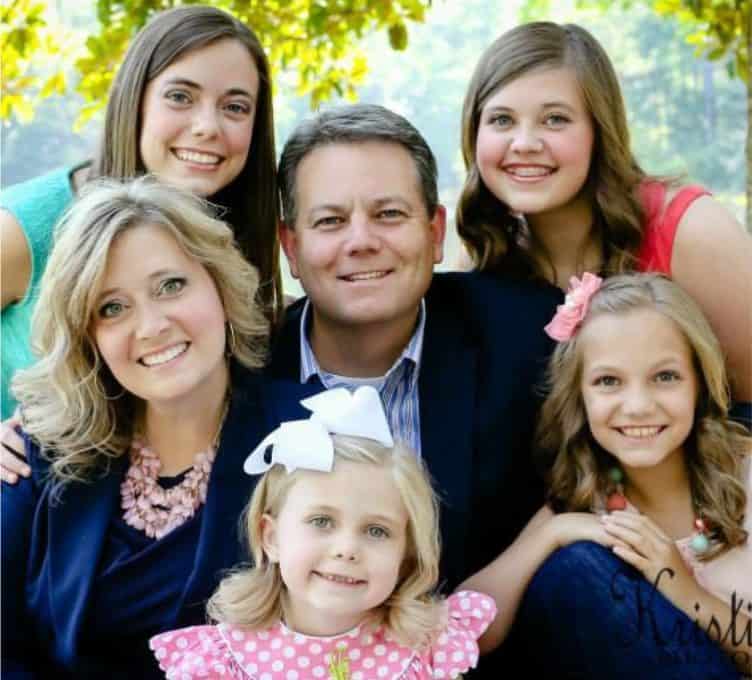 DEVILLE, La. – Philip Robertson, pastor of Philadelphia Baptist Church in Deville, La., is surrounded by his wife and their four daughters. BP Photo.

DEVILLE, La. (BP) – The permanent tie between the rural Philadelphia Baptist Church of Deville, La., and the urban Horseshoe Drive Baptist Church in nearby Alexandria is less a merger than it is a joining of forces.

About 750 people were in a March 2015 Sunday morning worship at Philadelphia Baptist Church Deville when the 30 remaining attendees at Horseshoe Drive Alexandria asked for help to keep the smaller congregation viable.

“It’s very humbling and an honor they would see us as someone they could reach out to,” said Philip Robertson, entering his 21st year as pastor at Philadelphia Baptist. “I have had multisite ministry on my heart for more than a decade…. It became apparent very early on that God was in this conversation. There began to be affirmation upon affirmation that this was God’s doing.”

The conversation that began in the spring of 2015 led months later to both churches uniting in multisite ministry. While the Deville location continued with well-established ministries in its rural community five miles from the nearest main highway, many of its members also assisted with a $400,000 renovation of the Alexandria church and its active neighborhood outreaches.

“The thing that has been so exciting about Alexandria is that there are so many more people to reach than in Deville, and so many unchurched people,” Robertson said. “We were at an apartment complex near Horseshoe Drive, a huge one, where we had teams going door to door. My team alone on that one night knocked on the doors of probably 20 different apartments.

“We probably talked with 12 families, and all of them were unchurched!” he said. “We’re just excited about having the opportunity to continue to reach more people and see them come to know Christ and have their lives transformed by the Gospel.”

The Cooperative Program, Robertson said, is the best global tool to see lives transformed by the Gospel.

That’s why he’s leading the Deville campus with incremental increases toward giving 12 percent of undesignated offerings to missions through the Cooperative Program, the way Southern Baptists work together for the expansion of a Gospel witness. Today the church gives 10.25 percent through CP as part of its plan to eventually give 25 percent of its undesignated income to ministry outside the four walls of the church.

“I believe in the Cooperative Program,” said Robertson, active in two local Baptist associations (one for each site) and in the Louisiana Baptist Convention. “I’m sold on the fact that we can do so much more together, and have greater impact for the Kingdom of God, working together as churches, than we can individually and apart. It makes practical sense to me.

Robertson noted the CP’s support of state, national and international missions, and the six Southern Baptist seminaries. “I’m a big believer in the methodology of the Cooperative Program in terms of missional impact.”

The methodology of multisite ministry has a similar missional impact in terms of effectiveness, Robertson said. Rather than being an on-his-own church planter, Clay Fuqua – the new campus pastor at the Alexandria site – has all the resources available to him that are available at the Deville site, which is staffed by eight vocational ministers and six support staff. At the same time, the Deville site now has an established base in Alexandria from which to do ministry, and it has committed Christian disciples eager to put their skills together for God’s use in an urban setting.

“There’s a wonderful match in the DNA of both sites, in terms of ministry and traditions,” Robertson said. “We have 100 people from the Deville site who have made a one-year commitment to go and serve at the Alexandria site, which provided a good strong core group.”

On Sept. 18, the revived Alexandria ministry held its official launch with 338 worshippers who were counted among the 1,020 in attendance at both locations combined, Robertson said.

Local and national outreaches included help for Baton Rouge residents impacted by recent flooding, a week-long missions outreach in McAllen, Texas, attended by 68 youth and leaders, and the fourth consecutive mission trip to Brazil that this July led to more than 3,200 professions of faith.

The Alexandria site has a clothing closet that is expanding into a multifaceted homeless ministry, providing limited hotel stays, bus transportation to other cities, employment preparation such as resume writing, job application assistance, and computer training, with plans for an afterschool care and tutoring ministry.

Robertson credited the Deville staff and committed lay members with providing leadership and staffing that allowed the expansion into Alexandria.

“The Lord has blessed me with some incredibly gifted people I have the privilege of serving with every day,” Robertson said. “You can’t do this alone…. You have to have people who are willing to catch the vision and commit to serve.”

At the Alexandria site, the campus pastor is the only paid staffer, Robertson said. He noted the volunteer efforts of the worship leader, children’s director, prayer minister and first impressions coordinator.

“How blessed we are to have such faithful committed lay people!” he said.

Despite its rural location, the Deville congregation has grown with an emphasis on evangelism training, music and discipleship preparing members to live missionally and give generously. The church has completed $4 million of construction debt free, including a multipurpose fellowship hall to eventually host a third congregation.

“We want to maximize our space as much as possible without building a new multimillion dollar worship center,” Robertson said. “The thing that keeps me motivated and excited about Philadelphia Baptist Church every day is that I believe with all my heart that there’s nothing God can’t do in this church that He can do anywhere else.”