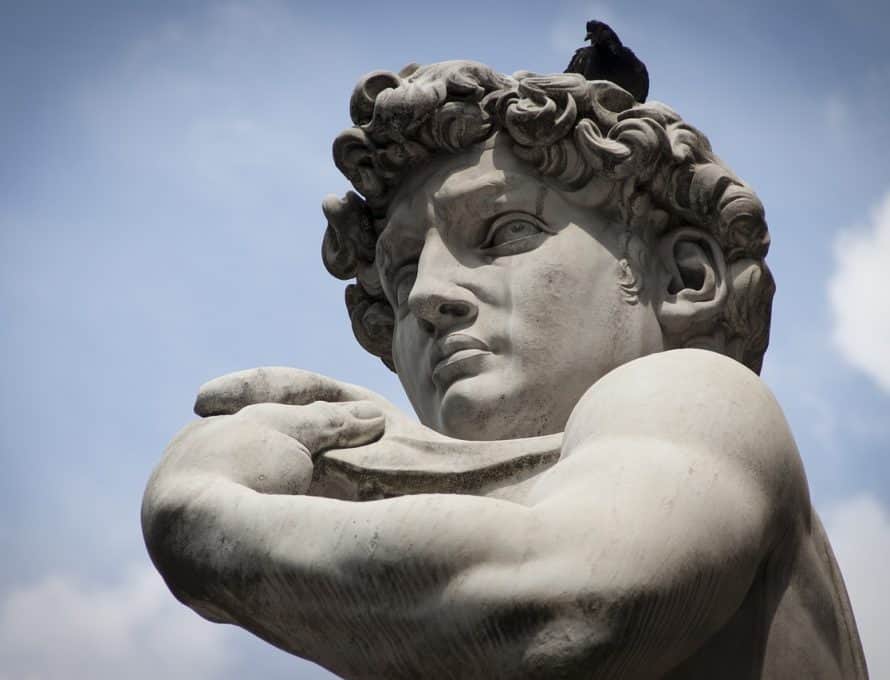 Perhaps the greatest statue of all time has a tiny flaw. And it’s a flaw that could bring it crashing down. There’s a lesson in this.

Throughout history, there’s been no shortage of superlatives showered on Michelangelo’s stunning statue of David, sling in hand, ready to take on Goliath. Giorgio Vasari, a 16th century artist and historian said this:

“It cannot be denied that this work has carried off the palm from all other statues, modern or ancient, Greek or Latin; no other artwork is equal to it in any respect, with such just proportion, beauty and excellence did Michelangelo finish it.”

And if you’re one of the millions of people who’ve travelled to Florence, Italy, and have seen the 14-foot statue in person, you probably agree.

More than any other work of art, except perhaps Michelangelo’s “The Creation of Adam” on the ceiling of the Sistine Chapel, the “David” statue captures the image and essence of Man. Confident, determined, physically beautiful and strong, called to a noble purpose: to do battle with evil in the service of the God in Whose image we are made.

And yet news from Florence reveals that “David” reflects humanity in another way: He is flawed.  To be more specific, there are cracks in his ankles; cracks that could, as the New York Times reports, “bring down the world’s most perfect statue.”

And, for what Anderson calls “a very long time,” “David” did lean slightly, which created the hairline cracks that threaten the statue.

You’d think making sure the statue stands perfectly upright would be a simple enough engineering feat, but there are a couple of problems. The first is bureaucratic inertia and confusion on the part of the Italian government. And the second: earthquakes. If Florence gets hit by one, it could be “Arrivederci, David.”

So here we have the crown jewel of creativity, art, beauty, and sculpture, and yet he’s flawed, fragile, in need of restoration, poised on the verge of catastrophe.

Seventeenth-century Christian philosopher Blaise Pascal saw the awesome paradox that is man: “What sort of freak, then is man!” he wrote. “Judge of all things, feeble earth worm, repository of the truth, sink of doubt and error,” at one and the same time the “glory and garbage of the universe!”

Of course, our glory sometimes blinds us to the hairline cracks in our souls and civilizations. The idols of our achievements in science, medicine, information, and technology give us the illusion that we’re the masters of our own destiny—even the masters of our identity, our gender, our sexuality, as if we’re creators of our own morality.

And yet. Scripture and thousands of years of human experience tell us that like David, our center of gravity is off, misaligned from our true identity, from the God who made us.

We’re also fragile. Pascal also wrote that “Man is a reed, the weakest of nature . . . It is not necessary that the entire universe arm itself to crush: a vapor, a drop of water suffices to kill him.”

Or, dare I say, cracks in our ankles.

On the flip side, it’s equally tempting, especially as Christians, to focus so much on our fallenness that we forget that we, God’s image bearers, are the crown of creation. We may be reeds, but we are, as Pascal also noted, “thinking reeds.” We’re capable of extraordinary acts of goodness, kindness, bravery, and love. We can write, paint, build, and sculpt extraordinary works of beauty. Through this creativity we reflect the glory of our creator God.

And that’s the story of Man given by Scripture. A work of extraordinary beauty and strength made weak by our sin—but unlike “David,” all those who are in Christ are assured of restoration.

The idea of the image of God is central to the Christian worldview, but something we talk about not nearly enough.  I love Glenn Sunshine’s little book on this topic, a collection of essays on the Image of God. It’s an easy, helpful read and you can pick it up at our online store.