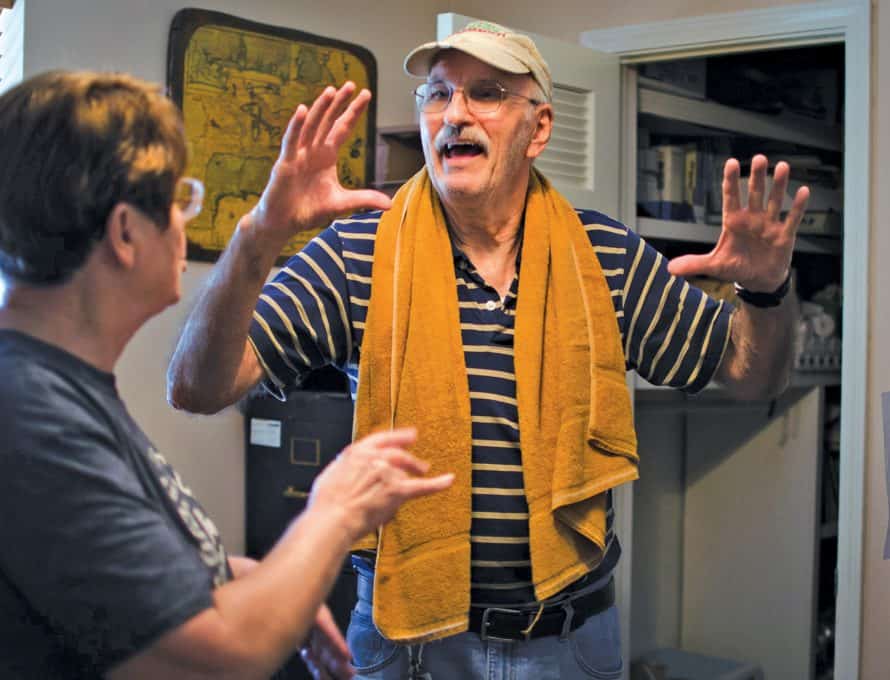 BATON ROUGE, La. – Flood survivor Donald Cupit, speaks via sign language about the damage to his home to longtime friend and interpreter for the deaf Dawn Melendez of CrossPoint Baptist Church in Baton Rouge. Cupit, 73, and his sister Mary 81, were saved from flooding in south Louisiana when Chad Tyron, a 24-year-old African-American neighbor, awakened them in the early morning hours of Aug. 14. Baptist Message photo

By the time Mary roused her caregiver – her deaf brother Donald Cupit, 73 – he only had time to throw on some clothes and grab his wallet and keys before helping his sister into a waiting car filled with neighbors they barely knew in East Baton Rouge. The drive to safety took them to Tyrone’s grandmother’s house where the Cupits were welcomed as family.

Racial tensions had torn Baton Rouge apart five weeks earlier. But race did not matter on that Sunday, Aug. 14.

Though his first efforts to rouse his neighbor had failed, Tyrone, a 24-year-old African-American Christian, could not leave his neighbors behind.

“He told me, ‘Mama, I’ve got to try one more time,’” his mother Theora recounted of her son’s insistence as floodwater rose in the street. “He’s always had a big heart.”

Having lived only two months in the neighborhood near Interstate 12 and Airline Highway, Chad Tyrone had spoken to Mary Cupit only briefly prior to the flood when he offered to mow the Cupits’ lawn. He learned later of Mary Cupit’s serious health issues, and the early morning flood rescue was the first time he met Donald Cupit.

“I didn’t know if anybody [else] would come through the water to get them,” Tyrone said.

Once safe, Donald Cupit video-phoned longtime friends Dawn and A.J. Melendez, members of CrossPoint Baptist Church in Baton Rouge. When Dawn Melendez met Tyrone and his mother, she understood why the new neighbors had gone the extra mile.

“We didn’t know each other, but we bonded because we know Christ,” Dawn Melendez said. “We knew immediately.”

Several days after the flood, Cupit stepped into his home for the first time after the water receded. according to Dawn Melendez, a deaf interpreter.

“I felt crushed. My heart was so sad,” Cupit said. “All of my years of life I’ve never seen anything like this happen. It was so unexpected.”

Mary Cupit’s declining health had forced her to move into his home months before the storm. Boxes of items and furniture from two households were lost, carted from the house by volunteers to combat contamination.

“I know I have to accept it, that if I keep anything my sister will get sick or I’ll get sick,” Cupit said. “The bad part is losing your memories.”

As friends and teams from New Orleans’ Canal Street Church and Gretna Covenant Church helped with clean-up, Cupit made sure his sister was not there to see it.

“She would be heartbroken,” Cupit said, adding that he told her, “Your job, sister, is to pray.”

Saying his faith in God was helping him accept what has happened, Cupit pointed to God’s providence.

“I do believe God is helping me. He sent me the warning,” he said. “I would never have known if my neighbor” – 24-year-old Chad Tyrone – “had not come and warned me.”