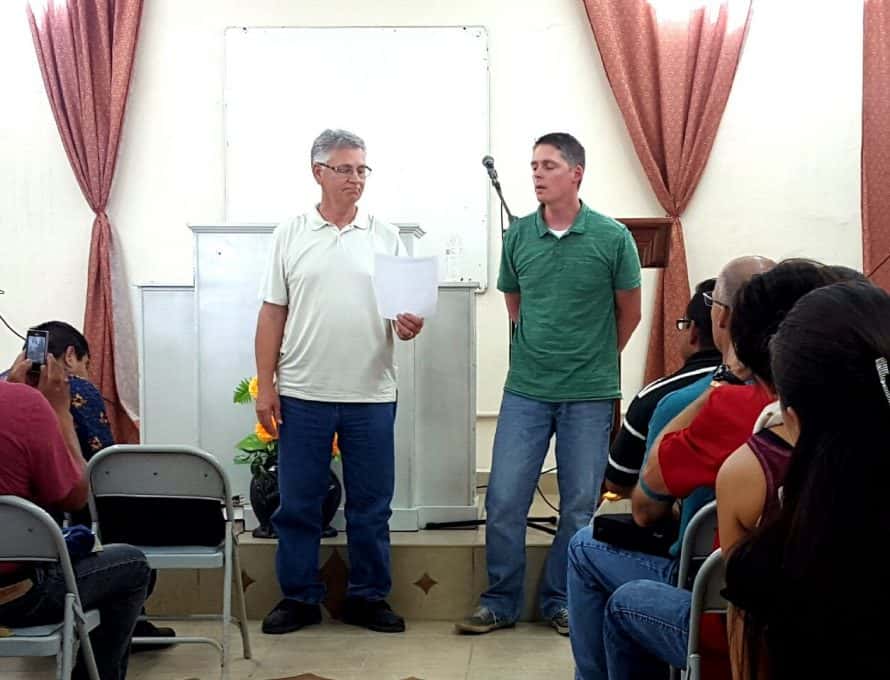 MATAMOROS, Mexico – It took 45 years, but Gene Butler finally got to sing a duet with his son.

“We figured it was about time,” Gene said with a laugh.

Gene, a member of First Baptist, Arnold and his son, David, the worship pastor at First Baptist, St. Charles, recently returned from a mission trip to Matamoros in northern Mexico. Their trip was with a group known as Focus on Missions that partners with a small, local Baptist Church and Pan de Vida (Bread of Life) Children’s Home for four to six weeks each summer.

The Butlers and the rest of the group spent their time building a wall and improving handicap accessibility at the church, conducting and eye glasses clinics, and sharing the gospel. But the highlight was an impromptu father-son duet on Sunday morning at the Matamoros church.

“David told me they wanted us to sing a song together, and he had two on his phone to choose from,” Gene said. “I can’t even remember what I chose. So without any rehearsal we sang it together.”

“It was something I’ve always wanted to do with my son, but I never really thought it would happen since he’s in St. Charles, and we’re at Arnold. It was all I could do to make it through the song without breaking down and crying.”

Though Gene said he was being “selfish” in wanting to sing with his son, he said God used their duet during the Sunday morning church service.

“God took it and used it as a tool to bring the church together,” he said.

When they’d finished their song, the Butlers moved to return to their seats when the local Mexican pastor gestured for them to remain.

“He shared with the congregation that we were an example of a father and son ministering together, and that this is what their families needed to do more,” Gene said. “He had tears in his eyes as he called his son up and then asked every father and son in the entire church up to the front and prayed for each one of them. The Holy Spirit was there.”