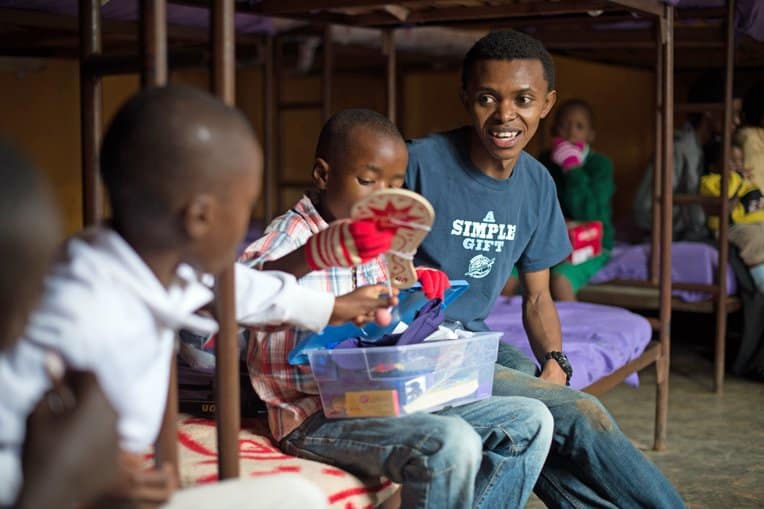 In one of his old bedrooms at Gisimba Memorial Center, Alex visits with boys who currently live at the orphanage as they explore the treasures in their shoebox gifts. Photo courtesy of Samaritan's Purse.

“That box let me be a little boy,” Alex Nsengimana of Rwanda, Operation Christmas Child (OCC) national spokesperson, explained to those attending the community event at First Baptist Church of Ferguson. “OCC distributed 250 shoeboxes to the children at my orphanage and it was the first gift that we had ever been given.”

The children were in the orphanage after the genocide that occurred during the days between April 7, 1994 and mid July 1994.  In about 100 days, one million Rwandans were killed during the civil war.

“I watched as my grandmother was killed,” Nsengimana said, “by a neighbor, someone who I knew by name.”

The murder of his family began a horrific journey around Rwanda for the six-year-old Alex and his brother and sister.  “God spared my life, and at the time I thought it was just coincidence,” he said, “there was the time when one of the militia had all of us lying flat on the ground and his gun magazine jammed with all the ammunition falling to the ground and another time, as I ran, I fell slipping on a cow pie as a bullet missed my head by an inch.”

Nsengimana said the gift of the shoebox showed him that he was special and that someone loved him.  “I read Jeremiah 29:11 and realized that God had a plan for me,” he said, “and it is a plan of hope for the future.”

According to Nsengimana, becoming a Christian didn’t make his life easier.  “I realized what was in my heart,” he said, “was not what was in God’s heart.  I was filled with bitterness and anger about what had happened to me and my family.  But, I began to understand that the people who had caused me the most pain in my life were also created by God and in His image.”

When Nsengimana was adopted into a family in Minnesota, he saw boxes being packed when he was in high school.  “I recognized the logo,” he said, “I had to pack boxes and then, when I went to college, I organized a packing party.  Then, I got an internship to work with Samaritan’s Purse.”

In 2013, Nsengimana was given the opportunity to return to Rwanda to distribute shoeboxes. “I got to go back to my orphanage and hand out boxes,” he said.  “I could see the exact spot that I was standing when I got my box.”

It was on that OCC trip that Nsengimana was able to take his next step in the healing process.  “I wanted to ask questions and to talk to the man who killed my uncle,” he continued.  “He told me that he was following orders. I was able to pray and to forgive him.  The forgiveness is freeing. It released the bitterness from my shoulders.”