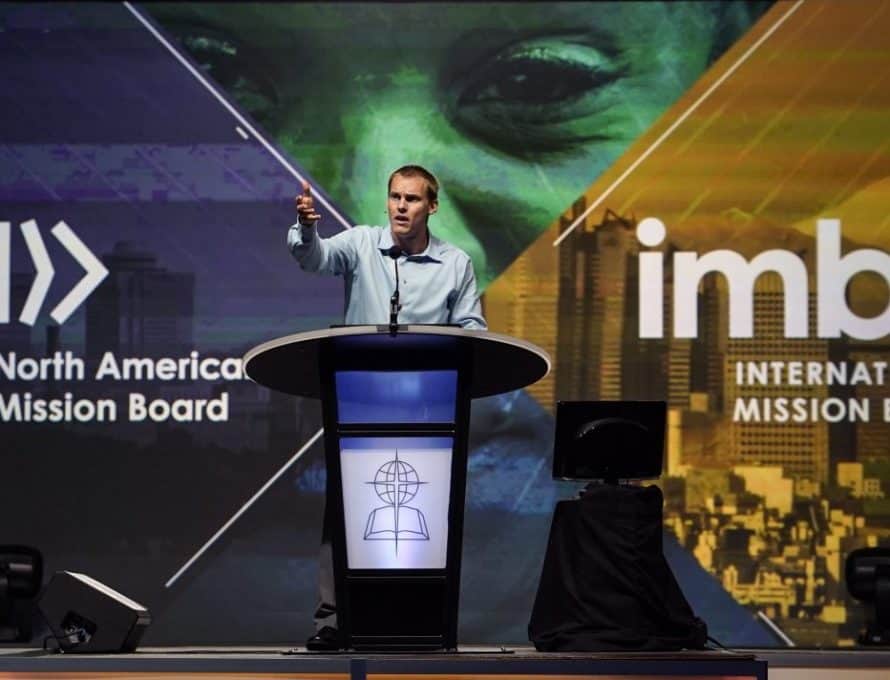 ST. LOUIS – David Platt, president of the International Mission Board, gives the IMB's portion of the Joint Mission Presentation at the annual meeting of the Southern Baptist Convention in St. Louis Wednesday, June 15. BP Photo.

For more than 170 years, God has blessed the International Mission Board for the spread of the Gospel among the nations – and by God’s grace, 170 years later, the IMB is “standing strong,” IMB’s Platt reported to messengers.

“I am confident that not every one of [those years] has been easy,” Platt said. “But … as Southern Baptists have acknowledged Him year after year, God has made our paths straight for the spread of His glory among the nations.”

Ten months ago, in the course of IMB’s normal budgeting process, leaders addressed the reality that the organization had overspent by $210 million over the past six years. Knowing that 80 percent of IMB’s budget is devoted to personnel costs, a diverse group of leaders – including missionaries with collective decades of experience –  concluded that for IMB to be in a healthy financial position, the entity needed to reduce the total number of personnel, both overseas and stateside.

“Now some might say, ‘You just said goodbye to hundreds of missionaries for financial reasons; what’s the IMB’s strategy for sending thousands more in their place?’” Platt said. “In the months ahead, we are going to be talking with you across this convention of churches about creating more pathways for more people with the Spirit of God to go to more places with the Gospel of God. …

“Our goal as a group of 40,000 churches is not just to send a couple of hundred more missionaries. We want to send thousands more missionaries, and the potential for doing that is real if we’ll create the pathways for that to happen.”

“Let me be crystal clear: the IMB is still going to send full-time, fully-funded career missionaries just like we’ve always sent,” he said. Those career missionaries will be surrounded with professionals, students, retirees and others who collectively show that global mission “is not just for a select few people in the church, but for multitudes of Spirit-filled men and women across the church,” he said.

Addressing Southern Baptist messengers, NAMB’s Ezell asked them and himself – “Is it working?” Ezell’s question referred to the overall strategy and direction of the mission board.

“NAMB’s primary reason for existence is to help Southern Baptists reach North America for Christ,” Ezell said. “Since 2011, NAMB has directed an increasing amount of its resources to church planting. It is fair to ask after five years – is it working?

Starting with church planting’s impact on baptisms rates, Ezell said church plants “baptize one person for every 14 members, compared to one for 52 in existing churches. This is true in the South and non-South.”

Ezell shared several examples of areas where churches planted since 2010 contributed a significant percentage of total baptisms from their states last year: In Vermont it was 83 percent; in the Baptist Convention of New England, which includes six states – 39 percent; and in Canada, 53 percent of baptisms from Baptist churches came from churches planted in 2010 or later.

“Southern Baptists, church plants reach people for Christ and the more we plant, the more baptisms we will see,” Ezell said.

In 2015 Southern Baptists planted 926 churches with 188 new affiliations for a total of 1,114 new congregations.