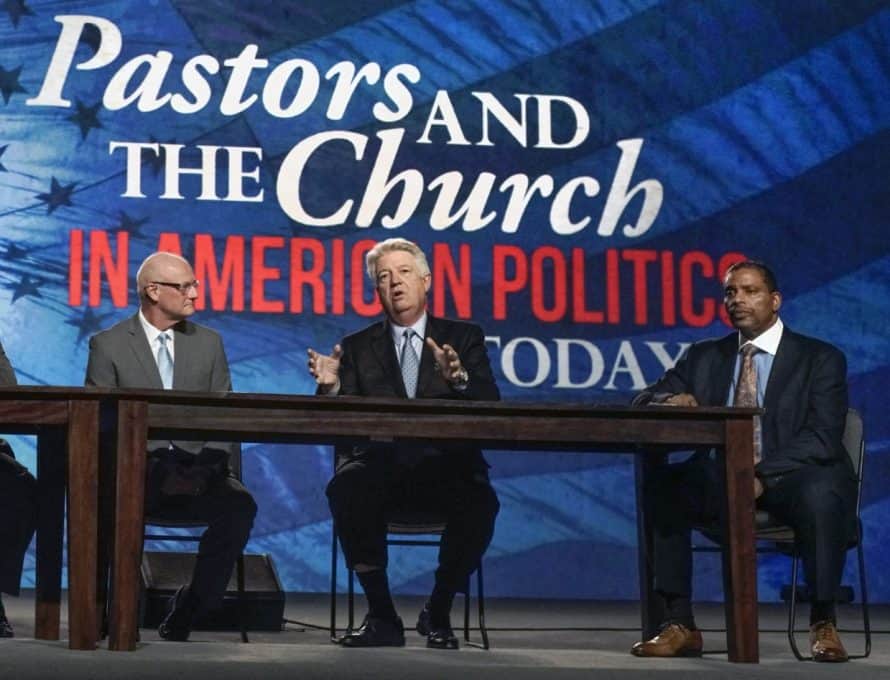 ST. LOUIS – Jack Graham, pastor of Prestonwood Baptist Church in Plano, Texas (center) participates in the panel “Pastors and the Church in American Politics Today” during the annual meeting of the Southern Baptist Convention in St. Louis on Wednesday, June 15. BP Photo.

ST. LOUIS (BP) – Proclaiming Scripture instead of promoting controversy is their approach when addressing political issues, pastors said during a June 15 panel discussion at the 2016 Southern Baptist Convention.

Five Southern Baptist pastors explained to Ronnie Floyd, now former SBC president, during the afternoon session how they handle political issues in their churches. The panel discussion – titled “Pastors and the Church in American Politics Today” and moderated by Floyd – came during a tumultuous election season that has found many Southern Baptists and other evangelical Christians dismayed at their presidential options from the major parties.

“I do not try to be controversial; I want to be biblical,” said A.B. Vines, senior pastor of New Seasons Church in Spring Valley, Calif., and a past president of the National African American Fellowship (NAAF) of the SBC.

“I want to give them the Word of God,” Vines said, adding he teaches the people of New Seasons Church “to trust God in these moments.”

Hance Dilbeck, senior pastor of Quail Springs Baptist Church in Oklahoma City, said he hears “a lot of disappointment” from church members with their choices for president.

“It’s almost like an expression of grief,” he said. “I can see all the five stages, you know, anger and denial and bargaining and depression and acceptance.

“[W]hat they’re grieving is at least the loss of perceived cultural dominance, where Bible-believing people were a majority that could exercise political power and always win the day,” Dilbeck told Floyd.

While Americans have “tremendous political tools,” Christians “have so focused on those tools that some of our spiritual muscles have atrophied, and we’ve gotten weak when it comes to prayer and to purity and to proclamation of the Gospel,” he said. “[Pastors] have this great opportunity to call our people back to the kind of biblical, spiritual influence that is always going to be our primary influence.”

The presumptive presidential nominees – Democrat Hillary Clinton and Republican Donald Trump – have prompted some Southern Baptists and evangelicals to declare they can vote for neither major candidate. They find Clinton unacceptable because of her support of abortion rights and government funding of abortion, as well as other liberal policies. They reject Trump based on his inconsistent positions on such issues as abortion, religious liberty and immigration; autocratic inclinations; insult-laden rhetoric; and a lifestyle marked by adultery.

Others have supported Trump in the primaries or plan to vote for him in the general election only because of the Democratic alternative, while a much smaller group appears to be prepared to vote for Clinton.

Refusing to vote is not an option, said Jack Graham, pastor of Prestonwood Baptist Church in Plano, Texas.

“You can’t sit this one out. You can’t say, ‘I’m not going to participate.’ The stakes are too high,” said Graham, a former SBC president.

Graham is focusing on three primary considerations in determining how to vote in this presidential election, Graham said: (1) A candidate who will seek God’s wisdom in making Supreme Court nominations; (2) someone who will support the sanctity of human life; and (3) a person who will defend religious liberty.

K. Marshall Williams, senior pastor of Nazarene Baptist Church in Philadelphia, Pa., and another former NAAF president, said the church needs to be “passionately praying” for those in authority.

Also, he said, Christians should “maintain a collective, incarnational, redemptive presence in the church and in the culture.”

All five pastors encouraged Christians to run for local offices. He prays God “would raise up men and women to go into public office of moral courage,” Williams said.

Floyd opened the session by encouraging pastors and other Christian leaders not to be judgmental of one another during this election season. “Disagreement does not have to result in a strained relationship with a brother or sister in Christ, especially over politics,” he said.