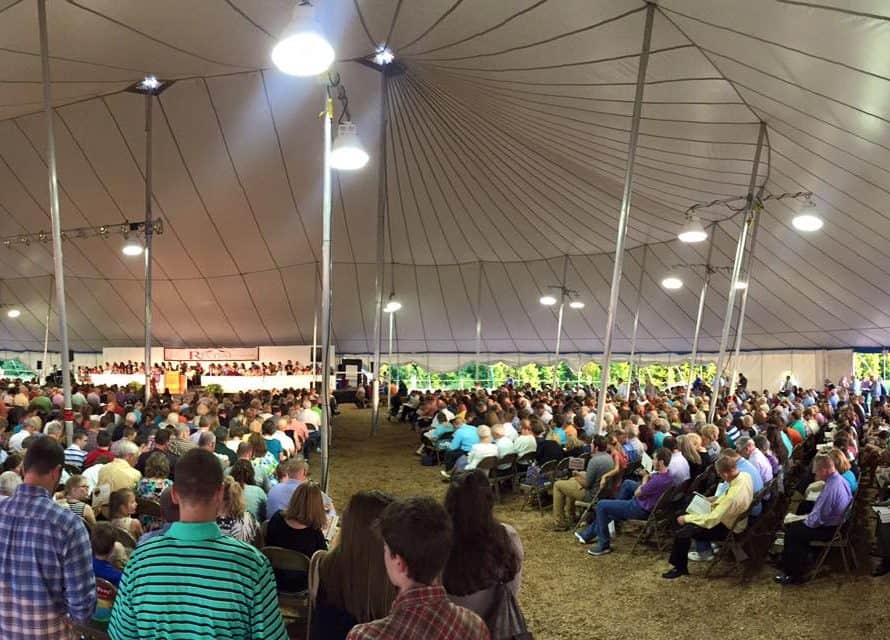 Column by OneCry’s Malachi O’Brien, pastor of The Church at Pleasant Ridge in Kansas City-area Harrisonville and associate pastor of prayer and church revitalization at nearby First Baptist Church in Raytown, Mo. He previously served as president of the Missouri Baptist Convention Pastors’ Conference.

The fame of revival spreads the flame of revival! The flames of revival have ignited in Burlington, NC, in a way that can only be explained by the miraculous power of the Holy Spirit. What began eight weeks ago as regularly scheduled one-week spring revival meeting at New Hope Baptist Church, under the leadership of Pastor Randy Hobbs, has far surpassed the church walls, community, state, and region. It quickly outgrew the seating capacity of New Hope and had to move under the “Old Time Gospel Tent.”

Earlier this week, I had the opportunity to speak with the 34-year-old evangelist C.T. Townsend and hear firsthand what God is doing. This anointed and fiery young evangelist is the human instrument God is using behind this revival. I must admit, since our conversation, I have been calling and texting friends, telling them to take notice of what is taking place.

C.T. immediately and humbly credits this movement to the power of prayer. I was impressed at how quickly he diverted any credit from himself. He says New Hope Baptist Church has prayed every Monday for ten years for God to send revival.

A few weeks into the meeting, a team of intercessors showed up from hundreds of miles away to stay and pray every day for the meetings. They pray in the tent every morning, and there are men underneath the platform praying every night. He says this group, led by Daniel Buchanan (a preacher and intercessor mentored by the late Percy Ray), is leading the prayer charge.

Not only is there power in prayer, but there is power in the unity among churches. “I have never seen such unity,” says C.T. Over 60 churches are now involved. Many other churches from many denominations and backgrounds are being drawn to the meeting.

While speaking with C.T., I was amazed at how quickly he emphasized that the draw is not the music but the preaching of the Word of God. He describes it as electric. Not just any preaching, but preaching repentance and the coming judgment of God. When the preaching begins, he says, “the power of God comes in that old-time gospel tent.” I am reminded of what Leonard Ravenhill once said: “You never have to advertise a fire. Everyone comes running when there’s a fire.”

In his words, the first week of meetings was “non-impressive.” Between 300 and 400 attended, and no one was saved until the final night of that week. However, it was a week of people confessing sin, repenting, and getting things right with God. That final night, a breakthrough occurred; Pastor Hobbs sensed the meetings needed to continue, and continue they have!

Eight weeks later, the revival meetings have moved underneath a massive outdoor tent, provided by Dr. Ralph Sexton, and crowds into the thousands are attending each night. Sixty churches are working together, and at times over 5100 were in attendance for the youth night. From all across the region, including surrounding states, people are driving hours and showing up hours early just to get a seat under the tent and to catch a glimpse of what God is doing. This is more than a Baptist thing. It’s a Jesus thing!

On June 30 over 3000 people showed up to the meeting, from near and far. Over 50 publicly confessed faith in Jesus Christ, including some young people from as far as five hours away!

So far, over 500 have walked the aisle to give their lives to Jesus Christ. According to C.T., many others have been saved watching the sermon online. Every night, the service is live streamed on Facebook.* Recently CBN came to film and document what is happening, and they aired the story of the #burlingtonrevival.*

Week 9 of the Burlington Revival begins July 5. If you are able, go check it out! It will be worth the drive. If you can’t get to Burlington, check out the live stream on C. T.’s Facebook page.*

Please take time to pray for C. T. Townsend, his team, New Hope Baptist Church, Pastor Randy Hobbs, and all involved. This could be the spark needed for a national outpouring of God’s Spirit. The new president of the Southern Baptist Convention, Steve Gaines, said in a recent interview that “The only hope Christians in America and America itself has is for God to pour out His Spirit on the church of the Lord Jesus Christ.” To all believers, pastors and non-pastors alike, let’s believe God for the fire to spread to where we are. This is our ONE CRY.

In summary, I see conviction, salvations, prayer, more prayer, unity, all generations, and the body of Christ coming together in this desperate hour. I am committed to pray for this fire to spread. Will you join me? “There is no hope like revival, and revival is our only hope.” The answer for this nation is not political, it is spiritual.