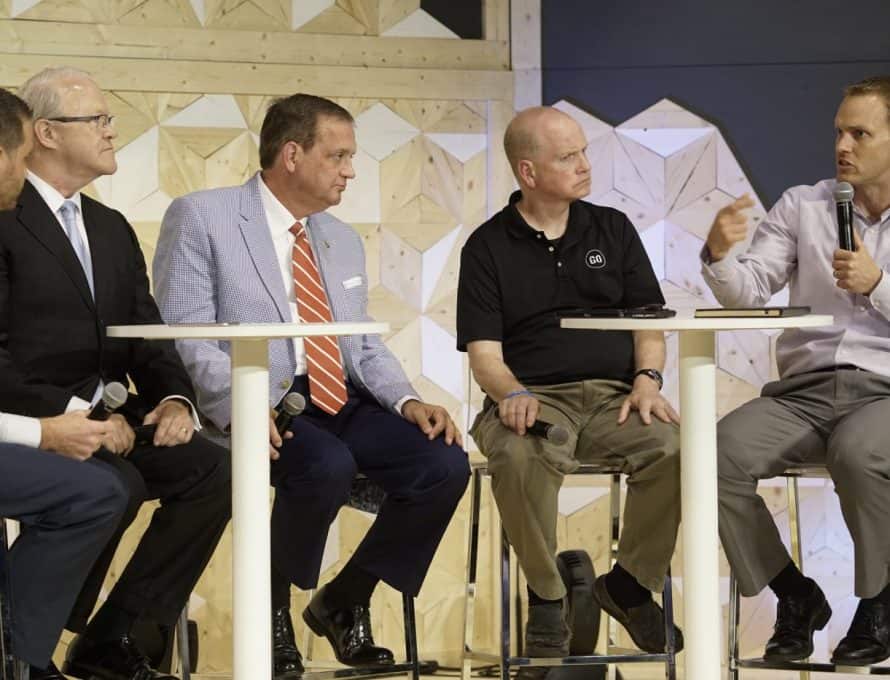 ST. LOUIS – David Platt, International Mission Board president, was among panelists who discussed ways to be more effective in global missions during one of 18 Cooperative Program panel discussions June 13 in St. Louis. BP Photo.

The videotaped discussion took place at one side of the America Center’s exhibit hall with Jon Akin, pastor of Fairview Baptist Church near Nashville moderating.

Moderator Jon Akin opened the discussion by asking Page about a report on the decline in attendance, members and baptisms in Southern Baptist churches. Does this indicate America is going to become like Europe – post-Christian, unchurched?

“I believe if we lose the base we lose the battle,” Page responded. “The base of Christianity in America is so important. I’m not saying other places in the world cannot send; they are.

“I believe we must sense the seriousness of this,” Page noted. “We must see what’s happening and redouble, retriple our efforts at seeing people coming to Christ, at revitalizing churches, at planting evangelistically strong churches here and around the world. So I’m deeply burdened. I am.”

When the moderator asked Mohler to analyze the issues leading to the declines, the seminary president referred to a mid-century chorus, “Deep and Wide.”

“Now it’s deep or wide in the sense that where you find Christianity you’re increasingly in the secularized West,” Mohler responded. “You either find it deep, where you find deep gospel commitment, deep commitment to truth, deep ecclesiology or it’s merely wide, and the wide is what’s disappearing.

“Cultural nominal Christianity is what’s disappearing,” Mohler said. “But where it’s found deep, there we have the real opportunity to preach the Gospel.

Moderator Akin asked Mohler, “Was Jesus giving us a program in Acts 1:8 or was something else going on there?” Akin was referring to Christians being Jesus’ witness locally, regionally and globally, all at the same time.

“I don’t want to say Jesus was giving a program,” Mohler responded. “Jesus was commanding His people. Those are two different things. Programs come and go. The commands of Christ are in place, in force, by Christ’s own Kingly authority, until He comes to claim His church.

What steps can a pastor take when he goes to a church that does not have a comprehensive missions strategy, Jon Akin asked the panel.

Danny Akin said pastors should “keep hammering” the Great Commission and Great Commandment to their congregation until “eventually it will work into the DNA of the church.”

Jon Akin then asked how churches can be the most effective in their global outreach.

“Any short-term mission – in order to be wise, faithful, effective – needs to be connected to a long-term, disciple-making process on the ground with people who know the language, culture, setting, context,” Platt said. “That’s one of the valuable things about having IMB in all these places that churches can connect with.”

Churches in the United States, Platt said, should connect with someone overseas who has an intentional, long-term, disciple-making process and who is seeing churches planted there in healthy ways.

“As local church pastors, you say, ‘How can we best be a part of that process? Apart from that relationship and that strategy, oftentimes short-term missions is going to prove to be harmful,” Platt said. “If we’re really approaching short-term missions right, it’s going to fuel long-term, disciple-making there – it’s going to be better as a result of our time there – and in our churches here.

“It’s going to be huge for people’s growth in Christ that will affect the way they live here,” Platt said. “That’s short-term missions done right.”

Each SBC entity has specific responsibilities that together fuel local churches’ Kingdom advancement, the panel agreed. “We cannot do our job if we are not in constant cooperation with one another,” Mohler said.