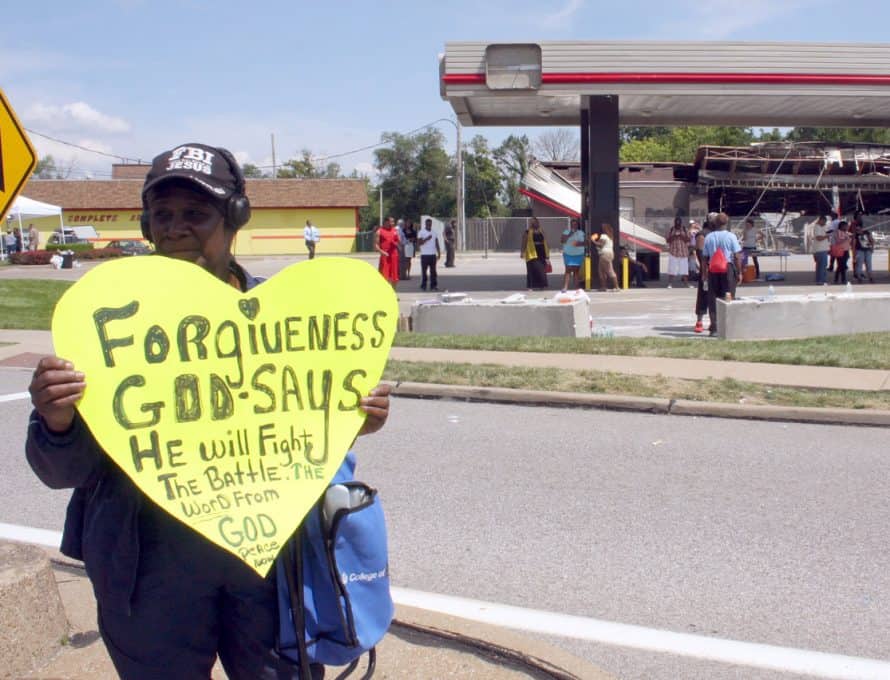 FERGUSON – With the burned out remains of a QuikTrip gas station in the background, this Pathway file photo from Aug. 11, 2014 shows a more subdued side to the protests that made international headlines. Pathway photo by Brian Koonce.

FERGUSON – The protests and unrest following the death of Michael Brown in 2014 present a striking image of the Ferguson community, one that pastor Joe Costephens says is incomplete, if not totally wrong.

“I don’t want to call it business as usual, but things have calmed down,” he said. “Now that we’re almost two years out, we’re making progress and moving forward as a community.

“It’s neat to see. There are a lot of good, Christian people – not just Southern Baptists – refocusing on the people of the community. All in all, things are looking up.”

It would be hard to imagine that looking at the television news coverage of mid-August, 2014. Fires, looting, and ugly clashes between police and protesters dominated international head-lines as details surrounding a white police officer’s shooting of a black 18-year-old were trickling out. First Baptist is located about two miles from where the shooting occurred. The church building itself was unharmed, but the Little Caesars Pizza across the street from the church building was set on fire, as was the Walgreens down the street. Protests and demonstrations flared up again when a grand jury determined it would not bring charges against the officer.

“There’s some cool things happening,” Costephens said , including but not limited to the activities of Crossover that preceded the Southern Baptist Convention Annual Meeting. One ongoing opportunity is with the local school district.

“They reached out and asked for volunteers to come out read with students and just engage with them,” he said. “So our church has adopted Ferguson Middle School and Johnson Wabash Elementary next door, and we have 20-30 volunteers in those schools weekly when it’s in session.”

The church also contributes to supplemental meals for food programs through the school.

“There’s a sense of excitement and a focus, evangelism and discipleship,” Costephens said. “Those are the two things we’re constantly talking about.”

Costephens asked for continued prayer for the community’s healing and continued recovery.

“One of the things that breaks my heart about many parts of town is that there is still a lack of a good church. There is a great need for people to continue to come into Ferguson and revitalize the city as they live out Jeremiah 29, seeking the welfare of the city.

“Within 10 minute of the church there’s 180,000 people who don’t know Jesus,” he said. “We would always welcome more hands and more feet.”