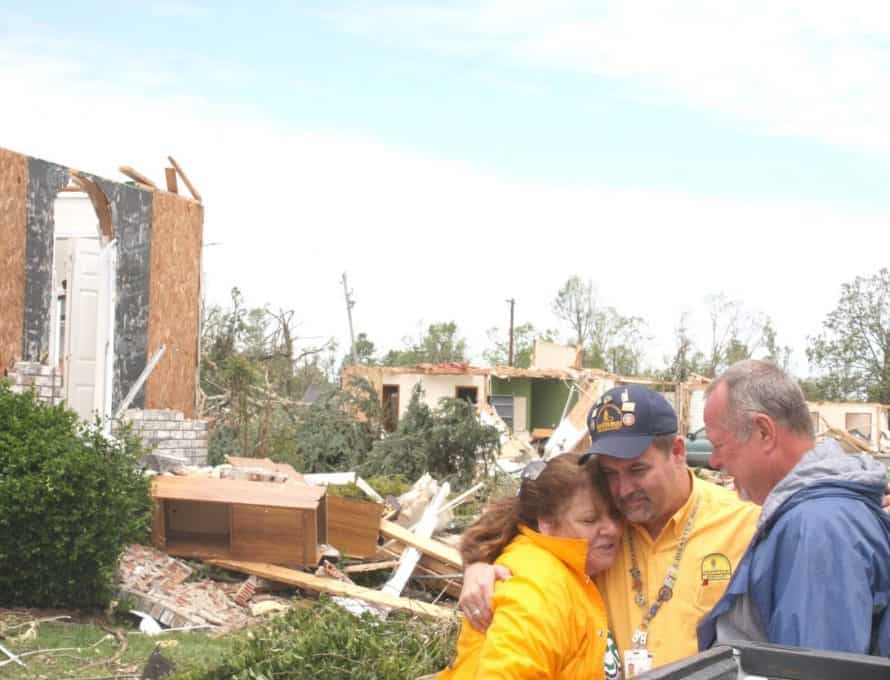 JOPLIN - Ron Crow, pastor of First Baptist Church, Diamond, and Disaster Relief “Blue Hat,” center, embraces fellow DR volunteers Gary and Twila Hunley of Oronogo Baptist Church in front of what remained of their home. The Hunleys were in their home when it was struck by the May 22, 2011 tornado. “We put a quilt over us and it hit,” Gary told The Pathway. “Your ears start feeling all this pressure and hear things pulling apart all around you. It felt like there were ten people pushing on the door behind me. I thought we were going to go flying any time. I could feel the water coming in, so I knew the roof was gone. The whole time we were just praying, ‘Save us Lord! Save us Lord!’ He held our hands and kept us there.”

JOPLIN – With sirens wailing, Greg Hailey closed his Bible, put it safely in a nylon satchel and used it to rest his head. Harmony Heights Baptist Church had no basement, but Hailey and 52 others took cover as best they could as a tornado interrupted their evening worship service May 22, 2011.

“There were about 10 or so of us in the library,” he said, “and there were others in the nursery. That’s the older part of the church with smaller rooms and better-built walls. We had maybe 10 minutes’ warning to take cover.”

The EF-5 tornado (wind speed 200-322 mph) tore a 6-mile-wide swath through town, destroying 8,000 homes and businesses, causing $2.8 billion in damages, injuring 900 and killing 161 people. Three of those 161 – three women – were taking shelter in the nursery in Harmony Heights, while another 40 there were injured.

The Harmony Heights building, at the intersection of Indiana Ave. and 20th Street, was a total loss. The roof was nowhere to be found, the walls collapsed and there were two crumpled cars, one on top of the other, in the back of the auditorium. Not a single person there that Sunday evening was able to drive their cars home. Hailey’s home did not suffer any damage, although his son’s was completely destroyed, as were 25 other church members’ homes.

“It was the typical noise: ‘It sounded like a freight train,’” he said. “Then you could hear glass breaking. Things were falling on my back, but I didn’t know what it was, you know? I could move, but I was laying stomach-down and couldn’t see.”

Just seconds later, it was over.

“I started feeling rain and could suddenly see daylight,” he said. “I knew the worst had passed.”

From there, he and the others helped each other out of the wreckage, and they began searching for those that were missing or had lost their lives. Hailey returned three days later to the pile of rubble that used to be the church’s building to search for the Bible he had to leave behind. After a few minutes picking through the splintered wood and shattered bricks, he found it as he was speaking to The Pathway. Because it was in the water-resistant satchel, the Bible withstood the days of rain that followed the tornado.

All of the businesses and homes that are going to be rebuilt have been rebuilt, with 80-85 percent choosing to remain in Joplin, said Steve Patterson, director of missions for Spring River Baptist Association which is based in Joplin. The town has actually gained 800 net population.

“That section of town is entirely new,” Patterson said.

Harmony Heights has rebuilt its building, but rebuilding a community and maintaining that momentum hasn’t been easy, said Harmony Heights pastor Charlie Burnett.

“There’s obviously a lot of grief when it first takes place,” he said. “But we know that none of those three ladies would want to come back, and we live on the hope and premise that what the Bible says is true. We didn’t want to hang our head too long, and we had to look to hope that’s there through Christ.”

The faith community was a vital partner in helping the community see that there was indeed hope after the storm. Groups and churches from nearly every denominational stripe converged on southwest Missouri, but it was the churches of Spring River Baptist that truly stepped up.

Like most disasters, there was an immediate receptivity to spiritual things after the tornado, but that didn’t last.

“It’s human nature,” Burnett said. “Five years down the road, it seems as though the town as a whole isn’t that much different spiritually.”

Patterson likens it to corporate post-traumatic stress disorder for the entire community. Voters have turned against a lot of the officials that oversaw the recovery effort, and many leaders are no longer in Joplin.

Associational leadership feared difficulty in keeping pastors and higher-than-normal turnover in churches, so they were proactive in providing counseling resources, advocating for sabbaticals and required time off, and they provided it across all denominational lines.

“Normally, FEMA tells you after a storm this devastating that you will lose 70 percent of your pastors within three years,” Patterson said. “Because the churches were proactive, we haven’t lost any more than the normal amount of church leadership during these five years.”

“I wish we had seen a revival, but while we haven’t seen a surge in growth, we have seen those churches that are ministry-oriented stay that way,” Patterson said.

Regardless of the healed physical state of the town, a sin problem still remains.

“We still have a lost world,” Burnett said, “and we have to get up every day and realize that they need us to share Jesus with them.”