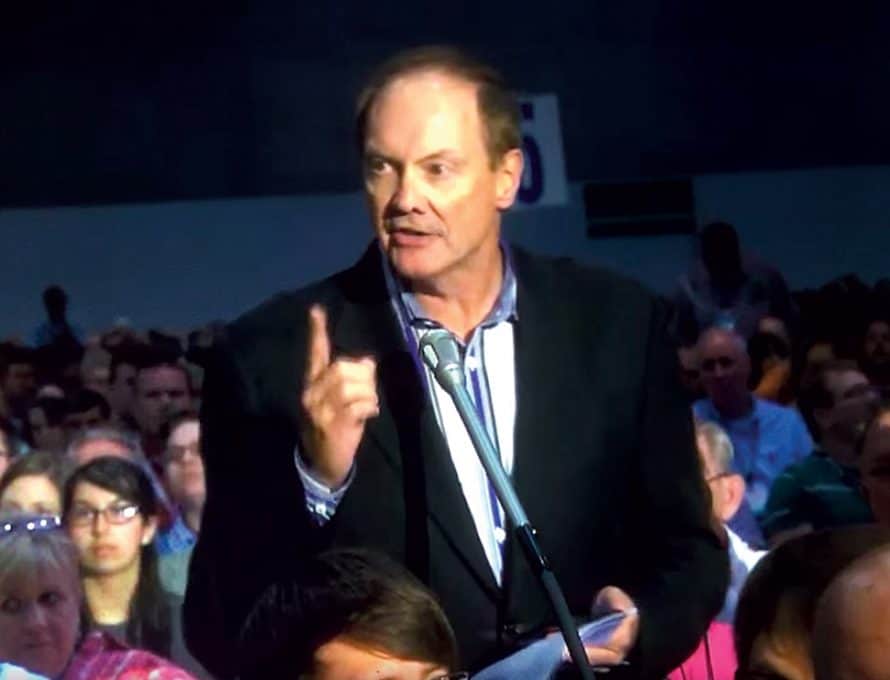 ST. LOUIS – Former SBC President James Merrit, lead pastor of Cross Pointe Church in Duluth, Ga., offered an amendment that went beyond the originally proposed language saying, “[A]ll the Confederate flags in the world are not worth one soul of any race.” Pathway photo taken from screen capture of live feed of SBC Annual Meeting.

The convention adopted late in its afternoon session a resolution that urged “brothers and sisters in Christ to discontinue the display of the Confederate battle flag as a sign of solidarity of the whole body of Christ, including our African American brothers and sisters.”

The resolution was one of seven adopted by messengers, but time for the report concluded before five other measures from the Resolutions Committee were able to be considered. The convention is to act on the remaining resolutions during Wednesday morning’s session.

The Confederate battle flag resolution was another step in the convention’s effort to address its past actions regarding slavery and racism. The SBC, which began in 1845 in part in support of slaveholding missionaries, approved a resolution in 1995 repenting of racism and asking for forgiveness from African American Christians.

It also has acted in a variety of ways in an attempt to bring about racial reconciliation and involve African Americans and other minorities in leadership roles in the convention.

The Resolutions Committee brought a proposal to the messengers calling for “sensitivity and unity” regarding display of the Confederate battle flag. Its resolution called for Christians who display the flag “to consider prayerfully whether to limit, or even more so, discontinue its display” because of the “undeniably painful impact of the flag’s symbolism on others.”

After two messengers spoke against the resolution, former SBC President James Merritt offered an amendment that went beyond the committee’s proposed language. His two-fold amendment deleted a paragraph that said the flag “serves for some not as a symbol of hatred, bigotry, and racism, but as a memorial to their loved ones who died in the Civil War, and an emblem to honor their loved ones’ valor.” It also removed language about prayerful consideration and called for a halt to displaying the flag.

Merritt, lead pastor of Cross Pointe Church in Duluth, Ga., said he offered the amendment not just as a pastor but as the great, great grandson of two men who fought in the Confederate Army.

“[N]o one can deny” the Confederate battle flag is “a stumbling block” for many African Americans to the witness of Southern Baptists, Merritt told messengers.

In a comment that produced a partial standing ovation, he said, “[A]ll the Confederate flags in the world are not worth one soul of any race.”

Calling it “a seminal moment in our convention,” Merritt said, “This is not a matter of political correctness. It is a matter of spiritual conviction and biblical compassion. We have a golden opportunity to say to every person of every race, ethnicity and nationality that Southern Baptists are not a people of any flag. We march under the banner of the cross of Jesus and the grace of God.

“Today, we can say loudly and clearly to a world filled with racial strife and division that Southern Baptists are not in the business of building barriers and burning bridges,” he said. “We’re about building bridges and tearing down barriers.”

Messengers approved both the amendment and the amended resolution by wide margins.

Kevin Smith, the new executive director of the Baptist Convention of

Maryland/Delaware and an African American, told Baptist Press he was “very thankful and very moved by his clarity [Merritt] brought to the issue today.”

He was “pleasantly surprised” by the convention’s adoption of Merritt’s stronger language and believes it will help the SBC in the future, said Smith, who has been assistant professor of church history and Christian preaching at Southern Baptist Theological Seminary.

Smith expressed gratitude to the Resolutions Committee and Dwight McKissic, who submitted the original version of the resolution. McKissic, an African American, is pastor of Cornerstone Baptist Church in Arlington, Texas.

Calling it “an extraordinary moment,” ethics leader Russell Moore told BP, “We watched a denomination founded by slaveholders vote to repudiate the display of the Confederate battle flag in solidarity with our African American brothers and sisters in Christ.

“I can’t recall ever seeing anything like it,” said Moore, president of the Ethics & Religious Liberty Commission. “And my hope and prayer is that we will work together in our churches toward modeling for the rest of the world what it means to be brothers and sisters in the kingdom of God.”

After the vote, Paul Pressler, a leader in the SBC’s conservative resurgence and a messenger from Second Baptist Church in Houston, protested in a point of order he was unfairly prevented from addressing the resolution, apparently in opposition.

Chief parliamentarian Barry McCarty explained that the electronic microphone ordering box for recognizing messengers is a ‘blind’ system and Pressler had not been treated unjustly. He advised SBC President Ronnie Floyd to rule the point of order not well taken, which Floyd did.