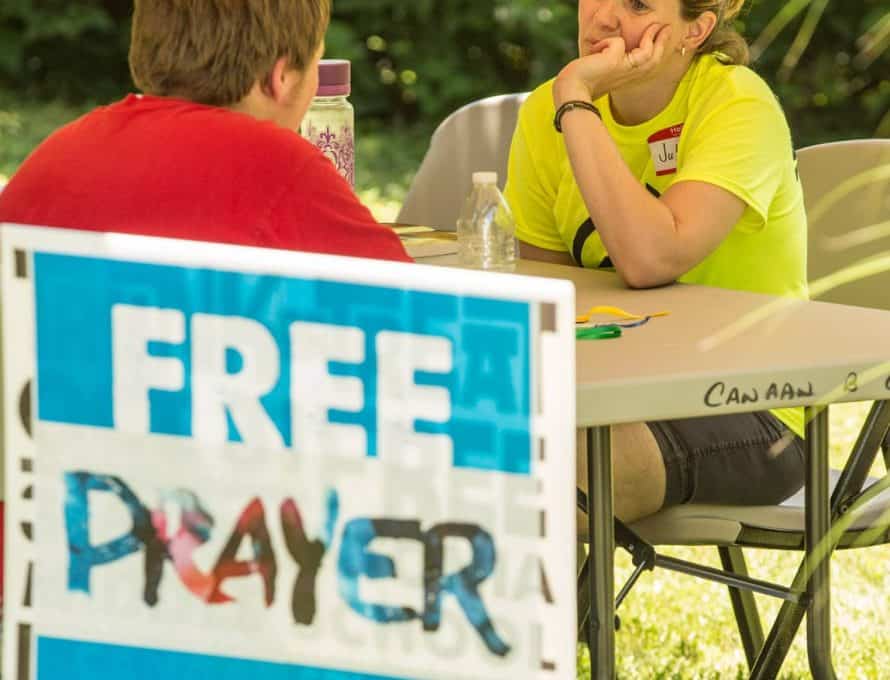 IMPERIAL – Julie DuVall of First Baptist Church in Bolivar, Mo., takes time to listen to prayer requests from a young man during a block party hosted by Canaan Baptist Church here on Saturday, June 11. The block party was part of Crossover St. Louis 2016, held prior to the annual meeting of the Southern Baptist Convention June 14-15 at America's Center in St. Louis. BP photo by Chris Carter.

One man who made a decision for Christ had been considering suicide just a few days earlier, said Eloy Rodriquez. Rodriquez, a longtime Crossover volunteer, serves as Hispanic pastor of Idlewild Baptist Church in Lutz, Fla.

Rodriquez said his team knocked on the door of the man’s house and asked if they could pray with him. The man told the team about a friend who was struggling with cancer. As they were preparing to pray, the man then opened up about his own struggles.

“Last Sunday, he closed his eyes while driving,” said Rodriquez, who has been bringing teams of volunteers to share Christ during Crossover since 1999. “He was willing to have whatever happen to him, happen — suicide basically. Then he opened his eyes, he was in the other lane, but there was no one else there. He pulled over and just cried — not because he was about to kill himself but because he realized he could have killed someone else.”

Rodriquez then prayed with the man to receive Christ. That was one of more than 50 Gospel conversations that took place through the ministry of Sterling Baptist Church in Fairview Heights, Ill., during the week leading up to its Saturday (June 11) outreach efforts. Sterling Baptist also hosted a block party, a zip line, free food and a soccer tournament.

Southern Baptists have sponsored a week-long evangelistic emphasis in the host city of the Southern Baptist Convention since 1989. The events are sponsored by the local Southern Baptist association and the North American Mission Board. Despite heat above 100 degrees in some locations, hundreds of volunteers from scores of churches participated in Crossover events throughout metro St. Louis on Saturday. At least 22 host churches and event sites were included. Preliminary reports from that day’s events were still being collected at deadline. A full report, including an update on the total number of salvations, is expected Tuesday (June 14).

Southern Baptist Convention President Ronnie Floyd said he hopes that through Crossover Southern Baptists will “leave a good testimony and a good experience for those people who don’t know the Lord.” He also believes that the work done during Crossover will help local churches have a better testimony in their communities.

“The most important thing is that we see people come to faith in Christ,” Floyd said.

Floyd noted that through Crossover outreach activities many local Southern Baptist laypeople will get involved in missions and begin to see their communities as mission fields.

Churches like First Baptist Church of Mascoutah, Ill., saw this happen firsthand. The church’s students were involved in a variety of outreach activities throughout the week — including painting several pavilions and foot bridges at a local park. They also shared the Gospel door-to-door throughout the community.

“One of the things that came up over and over among the youth this week is, ‘We had no idea there were so many lost people in our community,'” said Bonnie Bodiford, a high school Sunday School teacher at FBC Mascoutah. “They said it over and over again, ‘I had no idea I could pray with people in my own neighborhood. I had no idea I could share the Gospel with people I work with or go to school with.’ Previously, they always thought of missions as going somewhere.”

Youth and worship pastor Matt Burton noted that one 11-year-old girl who participated in the outreach efforts wouldn’t talk to anyone early in the week but by the end was active in sharing her faith and passing out invitations to church.

The church ended their week with an evangelistic block party that included games, free food, face-painting and balloon art.

Crossover Saturday also coincided with the launch of Send Relief, a compassion ministry initiative of the North American Mission Board aimed at helping churches deepen their connections with the local community. First Baptist Ferguson, Mo., hosted the debut of Send Relief. The event included the use of a mobile dental clinic and a mobile medical clinic. The units are available for churches to use for their own Send Relief events.

“We’re really hoping that in one, three, five years from now, the community of Eureka just kind of wakes up and says ‘We’re really thankful that Alive Church is a part of our community,'” said Mike Lee, Alive Church’s outreach pastor. “Our hope is that we’re reaching people, serving the community and ultimately seeing people respond to the Gospel.”

Jim Breeden, who serves as the teaching pastor at Alive Church and as executive director at the St. Louis Baptist Association, said he hopes that as area churches partner together to proclaim the Gospel during Crossover, it will strengthen their desire to work together.

“I hope all of our churches — nationally, in our state and in our association — stop and say, ‘We’re on the same team. We’re doing this together,'” Breeden said. “