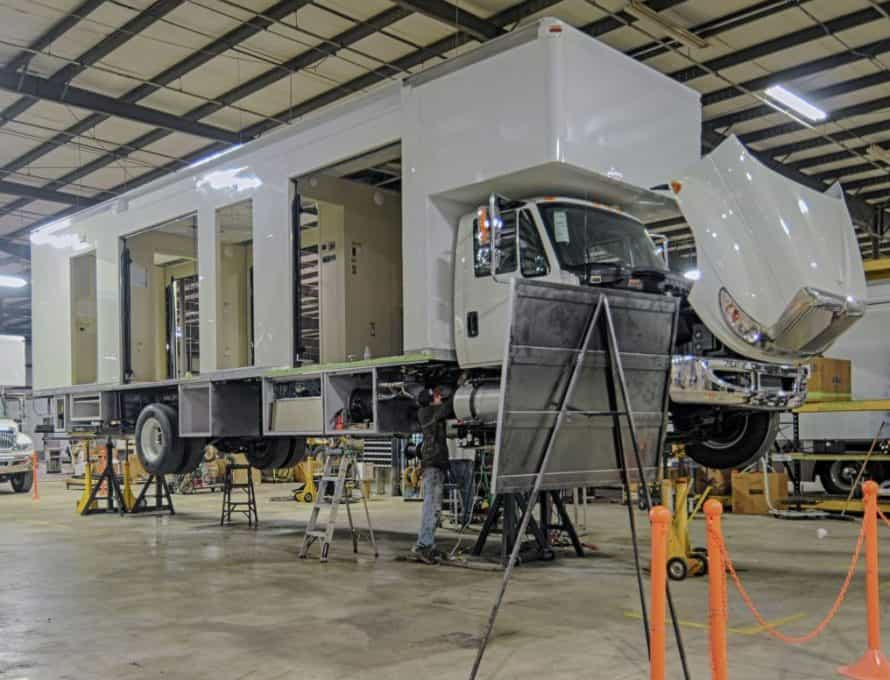 ST. LOUIS – The North American Mission Board has purchased two mobile clinics, one for dental services and one for general medical services. The clinics are currently being constructed and will be part of NAMB’s Send Relief compassion ministries. NAMB will launch the new ministry at the Southern Baptist Convention in St. Louis this June where Southern Baptists will be able to tour the new mobile units. BP photo provided by NAMB.

NAMB will officially launch Send Relief during the Send Luncheon held at noon on June 13 at The Dome at America’s Center, former home of the St. Louis Rams. Luncheon attendees will hear stories of how churches throughout North America are meeting needs as they engage their communities with the Gospel. NAMB will provide ways to help equip the church to more effectively do likewise in their community.

The free luncheon is available to everyone, but tickets are required. To obtain a free ticket for the event, visit www.namb.net/sendluncheon. SBC attendees can also learn how their churches can become more involved in church planting. NAMB’s SBC exhibit will feature the work of its Send Network and NAMB missionaries who are serving throughout North America.

Several missionaries will be present to share partnership opportunities. Visitors to the exhibit will have the opportunity to learn how their church can become a sending or supporting church and how interested individuals can start on a path toward church planting.

“We want Southern Baptists to know that God is at work and He is moving,” said Dustin Willis, NAMB’s team leader for Send North America events.

“What could happen if we truly joined together to see the Gospel go forth both through the meeting of physical needs and the planting of churches? Momentum has been growing over the past five years [since the launch of Send North America]. We can feel it and many of the churches who have joined in have felt it. What would it be like for all the churches participating in the Southern Baptist Convention to be a part of that momentum?”

The convention will conclude with a “Sending Celebration” on the afternoon on June 15 as NAMB again partners with the International Mission Board to highlight the role of local churches in sending missionaries to the mission field – in North America and around the world.

As a prelude to launching Send Relief at the convention, NAMB will feature a number of ministry opportunities the week prior to the SBC. These efforts will highlight the kinds of compassion ministries Southern Baptists can be equipped to carry out in their own communities and across North America through Send Relief.

For example, Send Relief will partner with First Baptist Church of Ferguson, Mo., to give away Backpacks of Hope and host a carnival for Ferguson children. Southern Baptist volunteers, in partnership with the Red Cross, will also go door-to-door to install free smoke detectors for Ferguson residents.

Ferguson made national news in August of 2014 when an unarmed African American teenager named Michael Brown was shot and killed by a white police officer. The shooting launched racial unrest in Ferguson and throughout the nation.

Send Relief will also operate a mobile medical clinic and a mobile dental clinic to help St. Louis residents in need of those services. The two mobile clinics are in the process of being built and will be debuted the week prior to the convention. NAMB’s Send Relief ministry will make the mobile clinics available to Southern Baptists for medical and dental outreaches in their communities after the convention.

“We hope Southern Baptists can walk away from the convention this year knowing that there is a very attainable ministry that they can be involved with that will help them engage with and reach their community,” said David Melber, NAMB’s vice president for Send Relief. “We also hope Southern Baptists will see that NAMB can come alongside them and provide resources that can help them do ministry they might not be able to do on their own.”