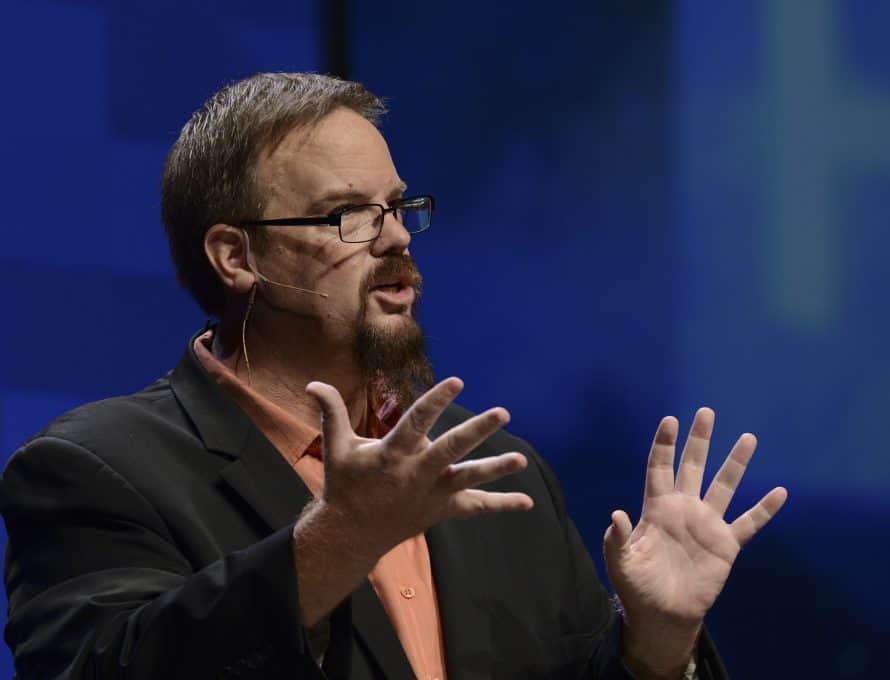 Ed Stetzer speaks during the morning session June 10 at the Pastors' Conference at the George R. Brown Convention Center in Houston. The two-day event is held in conjunction with the Southern Baptist Convention annual meeting June 11-12 at the convention center. BP photo by Thomas Graham.

Stetzer, 49, will begin his new roles at Wheaton July 1, which also will include publisher of Evangelical Missions Quarterly, founded nearly 50 years ago, and chair of the Wheaton College Graduate School’s evangelism and leadership program.

Wheaton College President Philip Ryken, in a news release May 16, said Stetzer is “a dynamic communicator and brilliant researcher who brings a genuine knowledge of the Gospel and a deep understanding of contemporary culture to his new place of service.”

Stetzer will “help raise up a new generation of passionate, generous-hearted evangelists who make a difference in the world for Jesus Christ” and “help Wheaton build stronger networks with churches across America and around the world.”

“It is a distinct privilege,” Stetzer said, “to be part of the Wheaton team.” In the new endowed academic post named The Billy Graham Distinguished Endowed Chair for Church, Mission, and Evangelism and through the Wheaton’s Billy Graham Center, Stetzer said he looks forward to “a unique opportunity to serve the church, helping Christians know and engage their culture in the name of Christ.”

LifeWay President Thom S. Rainer voiced appreciation that Stetzer, in nine years with the Southern Baptist Convention entity, “made a significant contribution to our ministry. We are excited for the impact Dr. Stetzer will make in his new role, and also grateful LifeWay will have a continued consulting relationship with him.”

Stetzer said he has been “blessed to work at LifeWay with men and women of character, driven by a burning desire to serve the church in her mission. I look forward to continued opportunities to work with LifeWay in new ways in the days ahead, because I believe in LifeWay, its leadership, its people and its mission.”

LifeWay Research has become a frequently quoted source of original research on the church and the culture in recent years while The Gospel Project, a multi-age-level Bible study resource, has grown to more than 1 million users each week.

Stetzer, while with LifeWay, also has served as executive editor of its Facts & Trends journal and authored or coauthored 10 books, most recently “Transformational Groups: Creating a New Scorecard for Groups” with Eric Geiger. Before joining LifeWay, he had written five other books.

He also is the lead pastor of Grace Church in Hendersonville and Gallatin, Tenn., which he founded in 2011.

Last year, Stetzer became co-host for the “BreakPoint This Week” half-hour radio broadcast with John Stonestreet. His blog and webcast are titled “The Exchange,” where he wrote today (May 16) about his move to Wheaton, and he is on Twitter as @edstetzer.

A New York native, Stetzer received a Ph.D. in missions and evangelism from Southern Baptist Theological Seminary in 2003; a doctor of ministry degree in pastoral leadership from Samford University’s Beeson Divinity School in 1998; a master of arts degree in church growth/planting from Liberty University Divinity School in 1995; an M.Div. from Southern Seminary in 1994; and an undergraduate degree from Shorter College in Georgia in 1988.

Stetzer was named as a senior fellow with Wheaton’s Billy Graham Center in July 2015. He also has been a visiting professor at Southeastern Baptist Theological Seminary in North Carolina and Trinity Evangelical Divinity School in Illinois.

Bruce Ashford, provost and dean of the faculty at Southeastern, said Stetzer will continue with the seminary as a visiting professor of missional research, specifically in the Ph.D. program in missiology.

Stetzer and his wife Donna have three daughters.