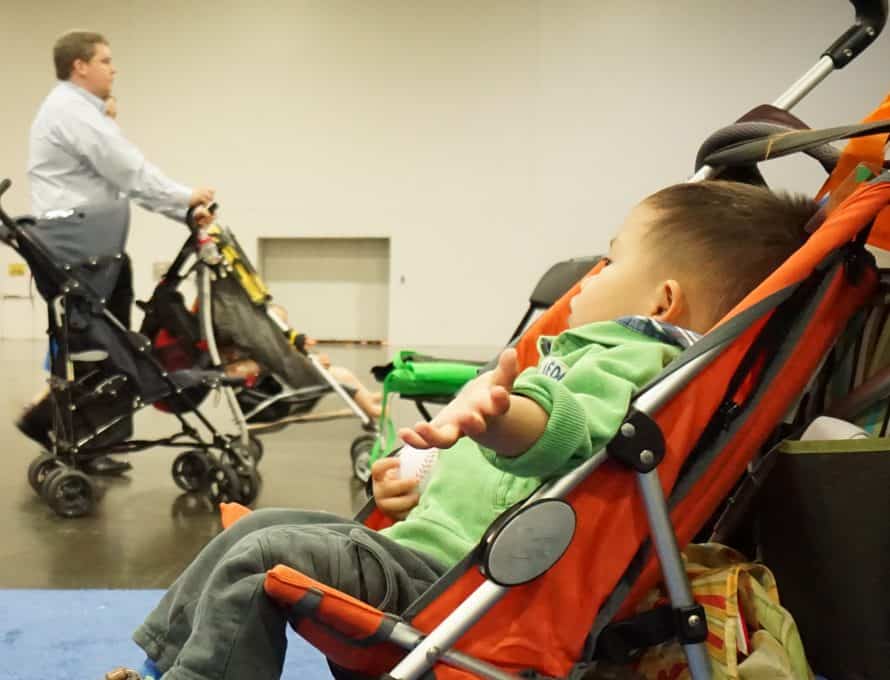 BP Photos COLUMBUS – The presence of children in strollers at Southern Baptist Convention annual meetings, such as these at the 2015 Columbus meeting, is thought to be indicative of increased participation among younger Southern Baptists

ST. LOUIS (BP) – Preschool child care registration for the 2016 SBC Annual Meeting in St. Louis reached capacity ahead of today’s May 6 deadline and has surpassed 2015 registration by more than 30 percent, according to Southern Baptist Convention Executive Committee staff.

“Preschool registration has been closing earlier due to [reaching] capacity,” Richmond said. “Since there is no onsite registration, parents are being proactive in getting their children registered.”

Registration for 6- to 12-year-olds is also strong, with about 150 already signed up and availability likely to end before the original May 30th deadline at sbcannualmeeting.net and thegiantcow.com/#!blank/tz247.

The increases in preschool and children’s registration are indicative of a growing presence of younger messengers and attendees at SBC annual meetings, said Roger “Sing” Oldham, SBC Executive Committee vice president for convention communications and relations.

“This year’s preschool and children’s registration bodes well for the future of cooperation as Baptists of all ages work together,” Oldham said, “to impact the lostness of our world with the Gospel of our Lord Jesus Christ.”

The Executive Committee’s yearly survey of SBC annual meeting attendance also indicates increased participation by younger Southern Baptists. Participation from adults younger than 40 reached a 10-year high at the 2014 annual meeting in Baltimore, the survey revealed, when nearly a fourth of attendees (24.68 percent) were under age 40. The survey, while not a scientific sampling, also indicated 10-year highs for SBC attendees in age categories of under 45 and under 35.

“Seeing so many strollers at the 2015 annual meeting in Columbus was very encouraging,” Oldham also noted. “It hearkened back to a time when younger pastors and their families were more actively involved in the SBC annual meeting.”

Registrations are still being accepted for Youth On Mission, which will engage students in hands-on missions projects June 14-15 for $55 per youth, plus a nonrefundable registration fee of $10 per youth. Youth on Mission registration is available at sbcannualmeeting.net.