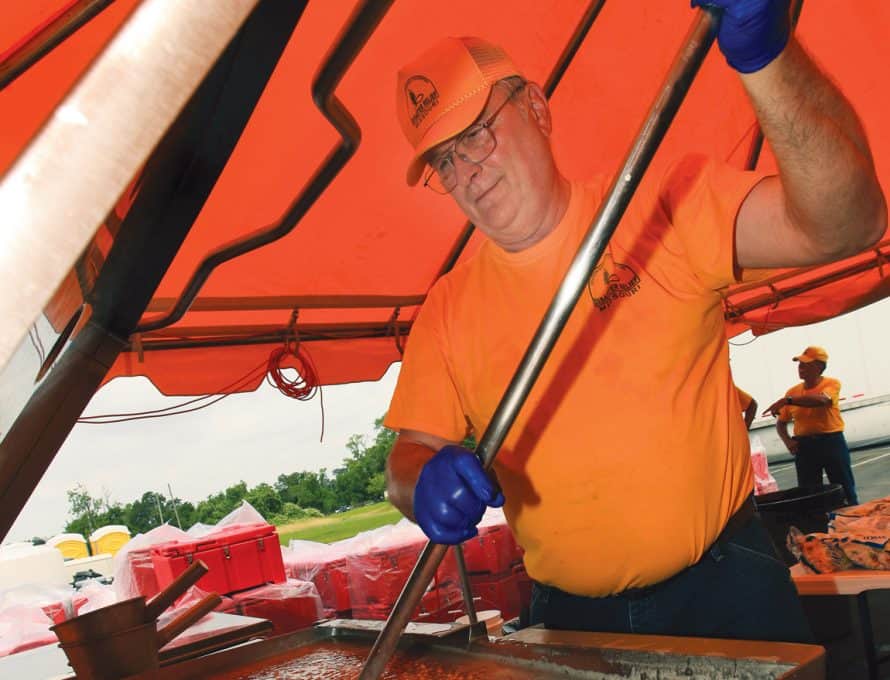 HOUSTON, Texas – Charles Tuttle of Oakland Baptist Church Clarksburg, Mo., cooks beans to feed people flooded out of their homes during the April flooding in the Houston, Texas area.Charles was part of a Missouri Baptist Disaster Relief team that was assisting the Southern Baptist Texas Convention. Pathway photo by Bob Greenlee.

HOUSTON, Texas – While spring has thus far been rather mild in Missouri, Texas has been hit hard by floods and Missouri Baptist Disaster Relief units have answered the call for help.

Ten Missouri volunteers are assisting Disaster Relief (DR) units from the Southern Baptists of Texas Convention (SBTC) in a feeding unit, and will remain there for ten days, prepping an average of 6,000 meals a day. While they were there, a windstorm struck and destroyed the kitchen, which took a day to rebuild.

Missouri also sent a six-person incident management team to assist SBTC volunteers, but they are on their way home. A laundry unit has been providing services on site since the flooding began over a month ago. Chaplains and assessors from Missouri responded both there and in Louisiana.

The interstate cooperation is a hallmark of the Southern Baptist Disaster Relief network.

“We always go help the other states when needed because we know that someday they will come to our rescue,” said Dwain Carter, director of Disaster Relief for the Missouri Baptist Convention.

On a global scale, Carter left May 10 for Nepal to assist Baptist Global Response (BGC) as they wrap up a year of response to the April 2015 earthquake that claimed more than 8,000 lives and injured more than 21,000. Carter will also be assisting BGR as they train national partners in Nepal to continue recovery and ministry efforts on their own.