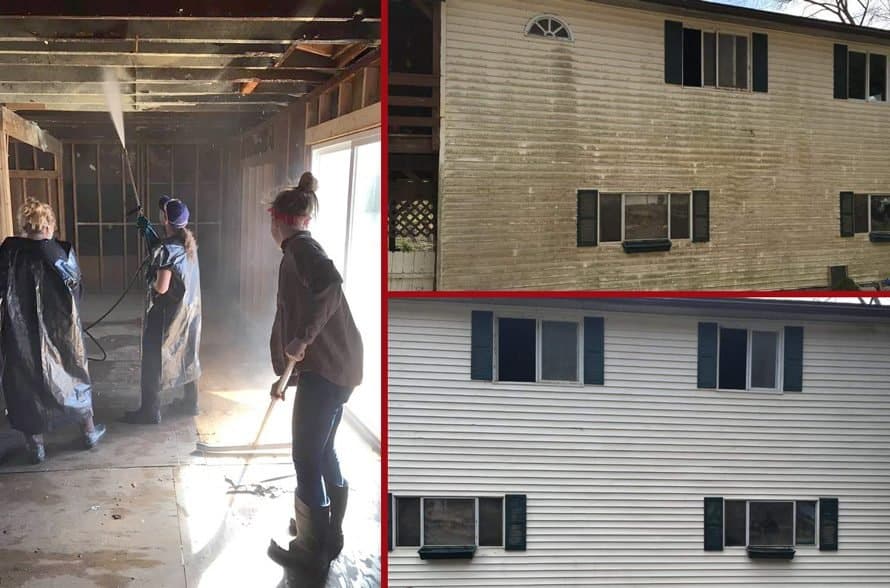 (LEFT) EUREKA - Students from the Baptist student ministry at Northwest powerwashed and sanitized this basement that was flooded in January. (TOP RIGHT) EUREKA – This “before” photo shows just how high the waters got along the Big River’s banks. (BOTTOM RIGHT) EUREKA - This “after” photo shows the difference made by the disaster relief crew made up of students from Northwest Missouri State University. Pathway photos courtesy Northwest BSU

EUREKA – Forget playing in the beaches of Florida, a group of 30 students from Northwest Missouri State University’s Baptist Student Union chose to spend their spring break along the cold, damp banks of the Big River cleaning up property damaged by January’s flooding.

The students partnered with Missouri Baptist Disaster Relief and Central Baptist Church here. They more or less adopted a half-mile of road along the Big River and poured all their efforts into three houses.

“One house was on stilts, and the water still got knee-deep in the living area, so the waters were at least 18 feet high,” said Campus Missionary Jason Yarnell.

Students powerwashed then scrubbed every inch that was exposed to the waters with Shockwave, a bleach-like cleaner. At another house they removed debris that had accumulated in the yard and in the third they spent an entire day scrubbing thousands of tools that had rusted when a shed flooded.

“They scrubbed every wrench and every socket with WD-40,” Yarnell said.

Central has ongoing ministries in the community, and is following up with the people helped by the students’ clean up efforts.

A new perspective for students

Yarnell had been through Disaster Relief training before and was familiar with the cooperative ministry that lends help, hope and healing in times of need, but it was the first look at the “Southern Baptist Disaster Relief Machine”
for most of the students.

“It is really awesome,” Yarnell said. “Joe (Banderman, director of collegiate disaster relief) rolls in with a trailer and powerwasher, and we get to work. It is something we and the students can be proud of. I’ve seen the shower trailers and the laundry unit and it’s so cool that we get to be a part of that. We have hard-working students and they dove right in. Joe was having to sprint just to keep ahead of the kids and make sure they had something to do.

“I think they recognized the value of bringing that help, hope and healing to people who have had to live with this mess,” Yarnell said. “The number of man-hours the students put in in a week set them ahead by months. It was good for them to see that they could minister to people like this right here at home and not have to go overseas to make a difference in someone’s life. None of these people we helped are believers, but we saw a real change in their demeanor and receptivity to the gospel simply by the way we worked for them. At the beginning of the week, they loved us and understood why we were there. That’s why is so great to partner with Central Baptist Church, so they can continue to do follow up with those people long after the students went back to campus.”