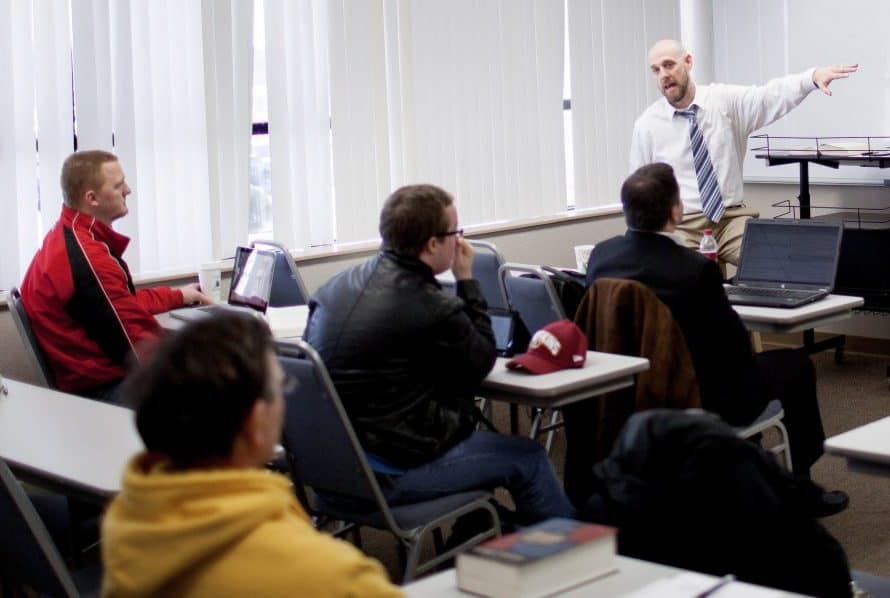 KANSAS CITY – Rustin Umstattd, assistant professor of theology at Midwestern Seminary, explains a point about the transfiguration of Christ during one of his master’s level theology classes. MBTS Photo.

KANSAS CITY (MBTS) – Assembling for its spring meeting on April 4-5, members of Midwestern Seminary’s Board of Trustees celebrated the announcement of a significant gift to the school, received reports of strong enrollment growth, passed the upcoming year’s budget, and affirmed faculty elections and promotions.

During his President’s Report, Jason Allen announced to the board an anonymous gift of $500,000 toward the institution’s student center.

“A while back, a supporter of Midwestern Seminary reached out to me expressing a desire to join in on what God is doing here and to assist us in carrying out our mission of existing for the church,” Allen said. “The family did not want any kind of recognition for the gift, but we are deeply grateful for their Christian spirit and kind generosity.

“In addition to the $7 million lead gift given to Midwestern Seminary in 2015 by the Mathena family, this most recent gift positions us closer to our goal of breaking ground on a campus student center next year,” Allen added.

“Year-to-date comparisons with the 2014-15 academic year indicates another year of robust enrollment growth,” Allen noted. “Our August 1 through April 4 total headcount last year was 1,789 students. Over the same time period this year, our unduplicated headcount rose to 2,193. In that we’ll add more students the remainder of this academic year, we anticipate our overall headcount to rise even more. Already, though, this year we’ve realized the largest enrollment in the history of the seminary.

“Overall, we cannot be more pleased with the record enrollment growth Midwestern Seminary continues to experience,” Allen said. “God continues to grant us his favor in this area and for this we are thoroughly grateful. Moreover, Southern Baptist churches continue to send us students—pastors, ministers, and missionaries for us to train for the church. God has entrusted to us an incredible stewardship, and we don’t take it for granted.”

In other seminary news, Allen informed trustees about the development of a new Chinese Studies program to be launched next academic year. Within this program, Midwestern Seminary plans to offer courses and degrees in the Chinese language as a means of serving Chinese speaking people in the U.S. and around the globe.

“With an already robust Korean Studies program, adding Chinese Studies will expand our offerings and, together, they will constitute our Asian Studies department,” Allen said. “This program will serve the church by training pastors and ministry leaders in their language and cultural context. ”

Provost Jason Duesing added, “The new Chinese Studies program is born out of a desire to serve churches around the world and to assist believers from all nations to, in turn, fulfill the Great Commission and reach the nations. To come alongside our Chinese-speaking brothers and sisters in this way is a joy and an answer to the prayers of many.”

In presenting the coming year’s budget of nearly $15 million to the Board, Allen noted that the goal of the institution’s business model is to properly steward the finances provided by God, through the SBC’s Cooperative Program and other revenue streams.

“This budget reflects our history, our present, and our future,” Allen stated. “We cannot divorce ourselves from our financial history. So, for the past 3.5 years, we’ve sought to demonstrate fiscal health, hold down expenses and, month-by-month, build our financial strength. In summary, we are in a position of strong financial health, and we are determined, by God’s grace, to get even stronger,” he added.

In other business, during the plenary session the trustees elected, re-elected and promoted faculty members and selected board officers for the upcoming year.

In recommendations coming from the Academic Committee, the trustees re-elected Professor of Preaching, Ben Awbrey, who has served at Midwestern Seminary for more than 20 years; elected two members to the faculty—Trey Bechtold, as assistant director of online studies and assistant professor of biblical studies; and Daniel Chong, as director of Korean Graduate Studies and assistant professor of counseling, Korean Studies.  Additionally, David Sundeen was promoted to dean of Online Studies, and Minsoo Sim was promoted to associate professor of Christian education and pastoral ministry, Korean Studies.