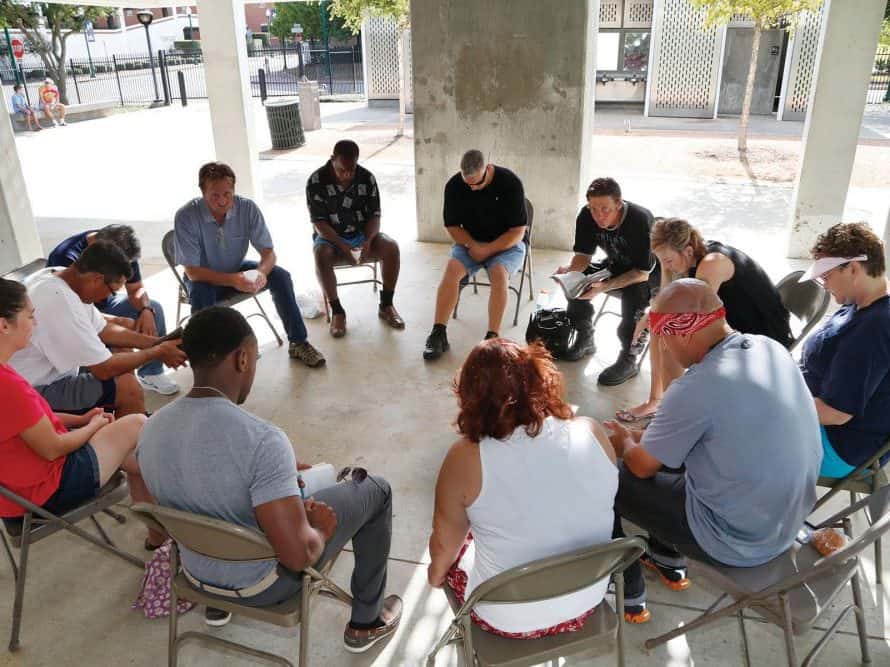 CONROE, Texas (BP) – Jeff Foshee was at the end of his rope. Haunted by depression, fear, and his own misfortunes, he felt he could not hold on any longer.

Thanks to a friend’s guidance, Foshee’s next step landed him at the Houston-area Under Over Fellowship in Conroe.

“When I first came to a Sunday service with Under Over, something clicked. It just felt like home,” Foshee says. “I have been here ever since.”

Jerry Vineyard, meanwhile, also found himself at the end of his rope. After nearly a decade of bivocational ministry, he had been on staff at two different churches and struggled with limitations of whom, inside the church, they were ministering to – both socioeconomically and racially.

When he became a lead pastor, thinking that position might offer more flexibility, he found himself stuck again. A nearly empty building was draining financial resources for outreach, yet members were not prepared to sell their assets, clinging to tradition and personal connections.

“Once again I found myself in a similar situation. I said, ‘Jesus, if this is really what pastoring is, then I don’t want anything to do with it,’” Vineyard recounts. “I didn’t know what to do. All of my problems seemed to be coming from owning a building.”

Then he began to realize that “maybe I could start a church without a building.”

“Another pastor in Conroe decided to sponsor me. They said they had never really heard of anything like this, but they would support me regardless. In 2011, we had our first service with 65 people [in Heritage Place Park downtown Conroe]. Today we have a membership of around 75. Half of those are either in transition or homeless.”

Plenty of issues came with launching a church under a park pavilion.

“I have had to learn a lot about drugs and prison life,” Vineyard says. “Many of them can’t get jobs or apartments because of previous felonies, so we decided we would make jobs.

Using simple skill sets combined with discipleship, Under Over Fellowship is creating opportunities for the homeless, formerly homeless and down and out in metro Houston. The cross woodcut is one of the products created by members of the community, which are sold through LifeWay Christian Stores.

“I was an art teacher before this, so I used my artistic abilities and we decided we would create shabby-chic furniture to sell. We just started fixing stuff up and put these guys to work.

“From there we started making crosses because some people didn’t have all the woodworking skills to make the furniture. We designed a simple cross they could make, paint and sell. LifeWay liked them so much, actually, they decided to sell them,” Vineyard says of LifeWay Christian Resources’ retail division.

Under Over has now expanded into two transitional houses with programs to assist men and women to re-enter society in positive fashion after a history of homelessness or drug addiction. The ministry seeks to aid all of its participants by providing everything from parenting courses to financial instruction and job training. Bible study and discipleship are also woven into every aspect of the outreach.