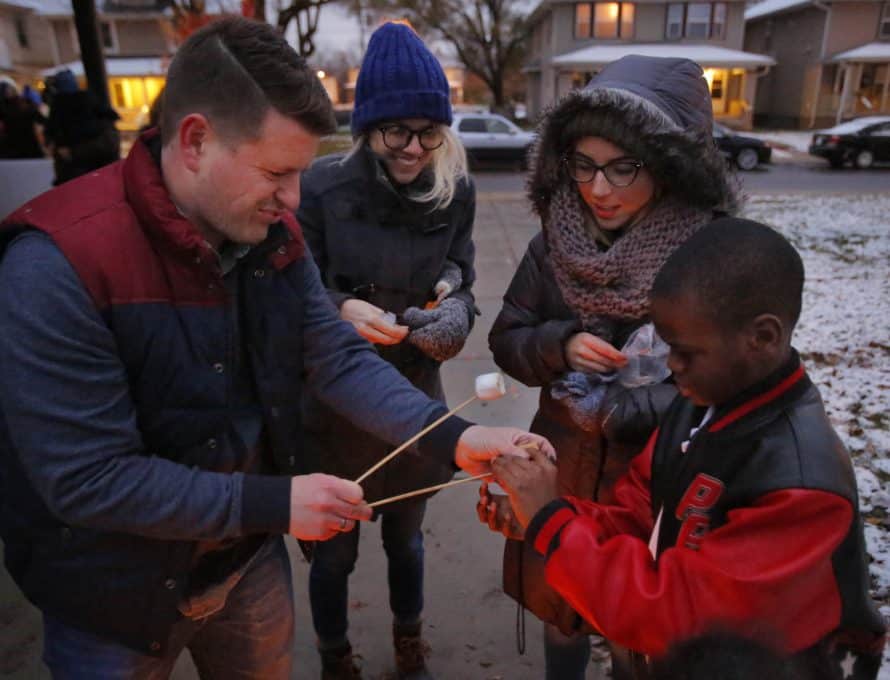 INDIANAPOLIS – Indianapolis church planter Barry Rager (left) and New Circle Church use events like “S’mores and Snow” to reach a neighborhood many describe as dangerous. Church member Courtney Ekema (second from left) and North American Mission Board student missionary Olivia Lehman enjoyed the event along with a neighbor who participated. NAMB Photo by John Swain.

INDIANAPOLIS (BP) – Three years ago Barry Rager was the pastor of a small Kentucky church. Most of his days were centered on important church business. Among his many duties as a pastor, he prepared sermons, visited sick members and mediated church disputes. All good work. All important work. All Kingdom work.

“I was kind of like the coach saying, ‘Hey, reach the people you are with,’ but I wasn’t actually the one doing it,” Rager says.

Today, he would tell you his life looks much different. He and his family live in the midst of the Mapleton-Fall Creek neighborhood of Indianapolis’ inner core.

A trip to Indianapolis for the 2008 Southern Baptist Convention first opened Rager’s eyes to the needs of the city. It wasn’t until 2012 that a Kentucky pastor, Jamus Edwards, came to him with an offer: “We want to plant a church in a major U.S. city, and we want you to be the planter.” Rager didn’t have to think hard about which city.

Edwards, pastor of Pleasant Valley Community Church in Owensboro, Ky., and his congregation felt the call to plant a church in an urban area, which eventually led to a strong calling for a church plant in Indianapolis. Edwards had met the Ragers on a playground where a strong friendship was formed. For years, the Ragers and Edwards encouraged and supported each other and their separate ministries. When Pleasant Valley felt God tell them to plant a church, they prayerfully considered who would lead the church plant.

A once thriving city in the 1920s, by the 1960s many Indianapolis residents had moved to new suburban homes, due to overcrowding. Over the next several decades, Mapleton-Fall Creek continued to struggle.

Today, 41.5 percent of residents do not have a high school diploma. A 2013 NeighborhoodScout.com article called the northern half of the area the 17th most dangerous neighborhood in the U.S.

As their new neighbors fight to get out of inner-city Indianapolis, the Ragers have fought their way in. To many, it would seem like a terrible trade-off.

Once the Ragers relocated to Indianapolis, they were told it would likely take them years to connect with their neighbors and build disciple-making relationships.

“When we moved in, we decided that we were going to be as open and positive as we possibly could be,” Amy Rager said. “Most of the people around here keep their blinds shut 24-7. They’re very closed. So we thought, you know what? Our blinds are going to be open. We’re going to act like we trust these people. We’re going to do anything we can to initiate that relationship.”

Before their boxes were even unpacked, the family showed up on their neighbors’ doorsteps with freshly-baked homemade cookies. They also invited their neighbors into their home for dinner.

As they continued to build community, the Ragers eventually started worship services with 40 people attending in September 2014. That was the launch of New Circle Church, Indianapolis. A year later their worship attendance more than doubled and they had seen 22 people baptized.

EDITOR’S NOTE: The annual Week of Prayer for North American Missions, March 6-13, and the Annie Armstrong Easter Offering provide support for missionaries who serve on behalf of Southern Baptists across North America. With a goal of $70 million, this year’s offering theme is “Here I am. Send Me.” For more information, visit anniearmstrong.com. To read about the other 2016 featured missionaries, visit anniearmstrong.com/missionaries-2016.