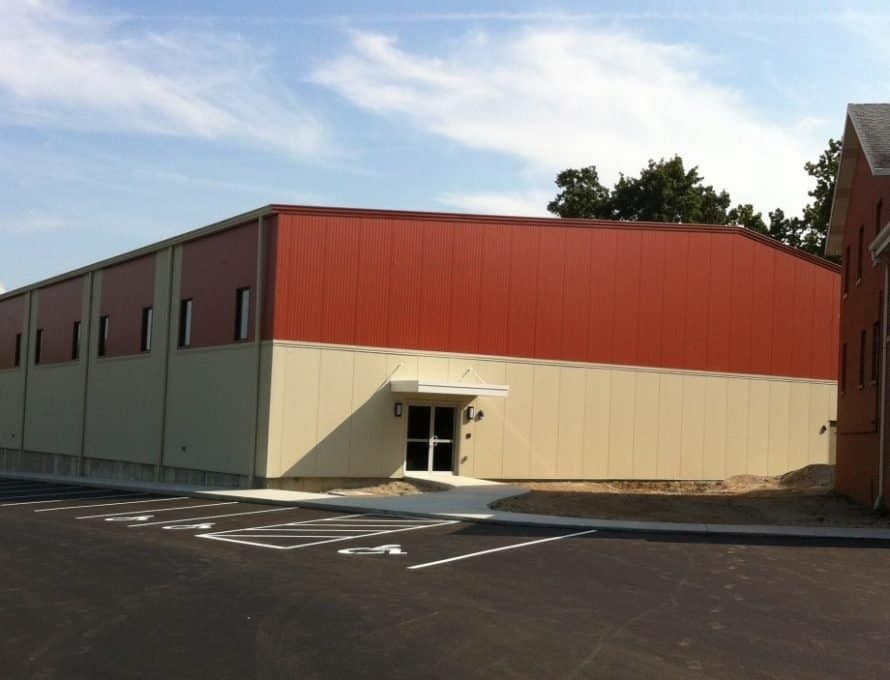 LEBANON – A vision over a decade in the making now stands completed here in Lebanon. With the help of an army of Constructors for Christ, Hillcrest Baptist Church recently finished and dedicated its new Family Life Center, an over 10,000 square-foot facility including classrooms, a commercial kitchen, and a gym.

Members of Hillcrest Baptist had long known that the church could use additional ministry space, particularly for recreational activities and special events. Over the last ten years and more, the church bought adjacent properties as they came up for sale with the hopes of eventually using the land for a building. When Pastor David Brown was called to the church in 2010, the church had acquired all the needed space but lacked the funds to turn the vision into reality.

For two years the vision lay latent with the building fund seeing some growth, but not enough to begin a project. The wind began to change in the Fall of 2012 when an anonymous donor offered to give $20,000 to the building fund if the church would match it. The matching gift lit a spark and the church gave $25,000, the donor chipping in the extra money to equal the church’s generosity.

“When the church exceeded the gift, I knew the fire was there,” Brown said.

From that point on, the church never looked back. Pastor Brown led the church in a vision casting service in April 2013. The proposed plan was to raise half the money before the church began building. In just over a year, the money was in the bank. The church broke ground in December 2014.

The building project was headed by Laura Ruether, the chairwoman of the church’s building committee. Brown said of Ruether, “Laura is a tremendous leader, a successful businesswoman, and an intelligent woman. She naturally rose to the top as the obvious leader.”

One church member described her as a “female Nehemiah.”

For five weeks in the summer of 2015, Constructors from all over the country rolled into Lebanon. Ray Dilbeck, a contractor out of Georgia, led the Constructor teams. Volunteers arranged their own transportation and paid for their own accommodations during their stay, some serving for a week with others staying for the duration. Workers ranged from skilled laborers to families with children and teenagers. Several members from Hillcrest also donated their time and skill to the project. Every Sunday night the people of Hillcrest would welcome a new team of Constructors into town with a special worship service and a fellowship meal. The next day, the crew got to work.

“Every single nail was hand-hammered in. They did it the old-fashioned way,” Ruether said.

With a small army of workers, the building progressed quickly. Not only did God provide the labor force, but special volunteers seemed to arrive on divine schedule. The week the commercial-grade kitchen vent needed to be installed, it just so happened that one of that week’s Constructors installed industrial kitchen vents for a living. The week the steel pillars needed to be painted, a commercial painter arrived and donated his skill along with a special paint to complete the job.

“There wasn’t a day that went by that I didn’t see a small miracle,” Ruether recalled. “There were several days where there were giant miracles. It was a total God thing.”

When Constructors for Christ’s five weeks came to an end, the building stood mostly completed. Laborers from the church spent another couple of months finishing various projects, and the church dedicated the building on November 22, 2015.

That day Pastor Brown preached from Proverbs 16:9, “The heart of man plans his way, but the LORD establishes his steps” (ESV). During the service Brown gave God all the credit for the building.

“His plan was greater than I ever envisioned. At the end of the day, all I can do is praise God.” Brown said.

“I always knew that you don’t tell God no, or you don’t use the word can’t,” she said. “What you don’t know or what you can’t do, He will help you do somehow. This is one those times that no one can deny that God pulled it off.”

The church is already utilizing the new facility with its AWANA and Upward Basketball and Cheerleading programs in full swing. Upward practices and games are now underway with ample space for games and fans.

Several members of the church plan to pay it forward and join the Constructors for Christ in their 2016 project.