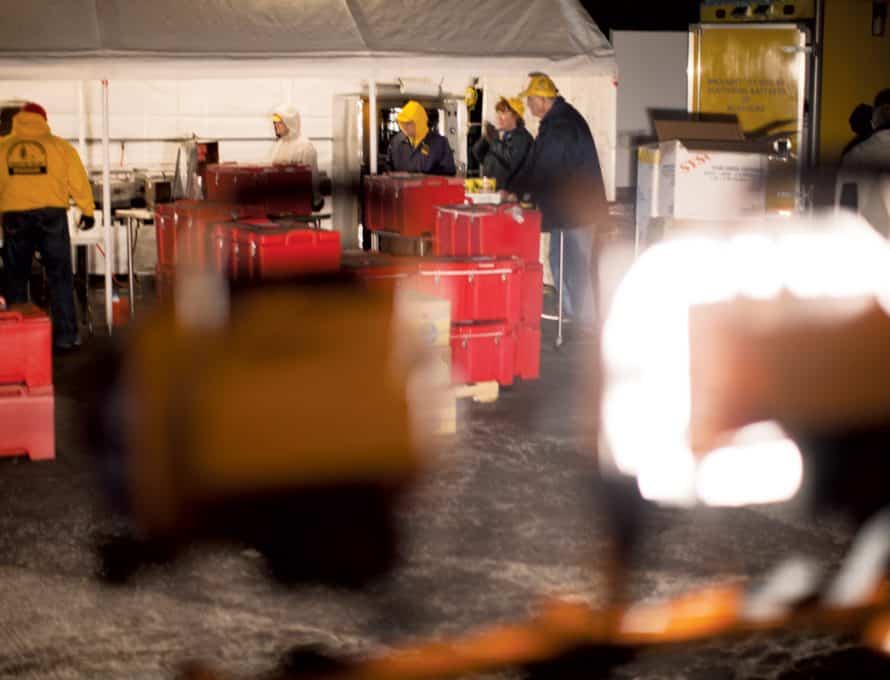 EUREKA – The waters from the Christmas floods have receded, but the cleanup job they left behind is pushing Missouri Baptists’ disaster relief (DR) resources and volunteers to the brink.

“It’s bigger than people realize,” said Joe Banderman of California, the leader of the Missouri Baptist Convention’s(MBC) collegiate disaster relief team. “Unless you’re here, it’s hard to get an idea of the scope of the flooding.”

In St Louis, Franklin, Jefferson, St. Charles and Lincoln Counties there have been more than 3,000 homes. Governor Jay Nixon has declared a state of emergency and has asked federal authorities to do the same.

Flash floods also swept through Springfield, as well as McDonald, Newton, and Japser Counties, prompting cleanup responses from Missouri DR as well as Texas Baptist Men with damage to just under 1,000 homes damaged in that region.

So far, DR workers have about 250 work orders, and have completed 80. Through  Jan. 9, the DR mobile kitchen has prepared 10,000 hot meals and will continue operating through the end of the week.

So the equipment is there. All that is lacking is the manpower.

“We’re at nearly 5,000 homes affected across the state,” Banderman said. “Even if every trained volunteer came, we can’t bring hope, help and healing to everyone without more volunteers being trained. Do we need your prayers? Yes. Do we need your finances? Yes. But what we really need is people. This is an ‘all hands on deck’ situation.”

Volunteers have come in from Baptists in Tennesee, Kentucky, Texas, Michigan, New Mexico, Kansas, Nebraska and Illinios, but with the response likely to go on for weeks, more Missouri volunteers are needed. Through Jan. 9, 150 volunteers have served in the St. Louis metro area, and Dwain Carter, director of Disaster Relief for the Missouri Baptist Convention, said he looks for 300 this week. 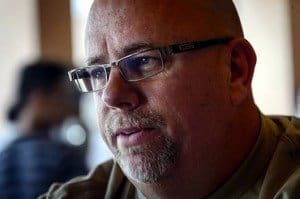 Much of the time, it seems disaster strikes in extreme heat or cold. In many ways, the cold is worse for volunteers, especially when dealing with water. At the incident command center set up at First Baptist, Ellisville, temperatures in the single digits burst a water line that took a laundry and shower unit out of commission. The cold caused issues with a generator as well at the command center, causing the mobile feeding unit to scramble for a solution. In the heat, a volunteer’s main concern is staying hydrated. In the cold, they must stay hydrated, stay bundled up and stay dry while working in flooded basements.

“In a geographical sense, this is one of the largest if not the largest disaster the state has ever had,” said Dwain Carter, director of Disaster Relief for the Misssouri Baptist Convention.

The 2011 tornado in Joplin had a much higher cost in human lives, but in terms of square miles and families affected, the floods outweigh it. Plus, the tornado stayed in the news cycle driving relief and donations, while soggy Missourians from St. Louis to Carthage were on the nightly news for two or three days before the national spotlight turned elsewhere.

Still, the news isn’t all bad. One person in Arnold has accepted Christ as a result of Missouri Baptists’ ministry. 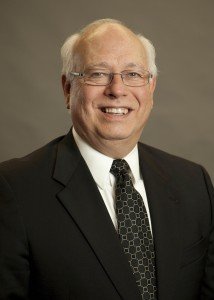 “Our DR volunteers are authentic disciples on mission with God,” said John Yeats, MBC executive director. “They do this not merely for humanitarian reasons but to make a difference for the cause of Christ. So during the worship service when an announcement was made that someone they had served had surrendered their life to Christ, these committed brothers and sisters were the first to celebrate with the angels in heaven the announced new birth.”

Congregations like First Baptist, Ellisville and Sterling Acres, Arnold are supporting DR volunteers as they work, and First Baptist Arnold, thanks to a previous partnership with the Red Cross, was able to open its doors as a shelter for hundreds immediately after the floods.

Mike Hubbard, pastor of Genesis Church, and his congregation set out the Sunday after the rains stopped to help local homeowners try to recover.

“We were helping her get everything out of the basement for the team she had coming on Monday,” he said. “She told us they were going to sanitize her basement, cut out dry wall that was affected, and get her house on the road to recovery.  So I asked her who she had doing the work.  Her eyes filled with tears as she said, the group is called ‘Disaster Relief.’ I immediately knew what was happening. The second largest disaster relief organization in the world was headed to our town to serve. The flood left Eureka on Friday, we were there Sunday, and they had already been there to schedule her for Monday.”

“The opportunities for transforming lives and communities with the gospel are rampant through Disaster Relief,” Yeats said. “Volunteers are needed. Training is important. Preparation imperative. Because when the next tragedy happens, Missouri Baptists want people to experience the hope and healing that comes through faith in Christ.

Learn how you can support Missouri Baptist Disaster Relief at: mobaptist.org/dr