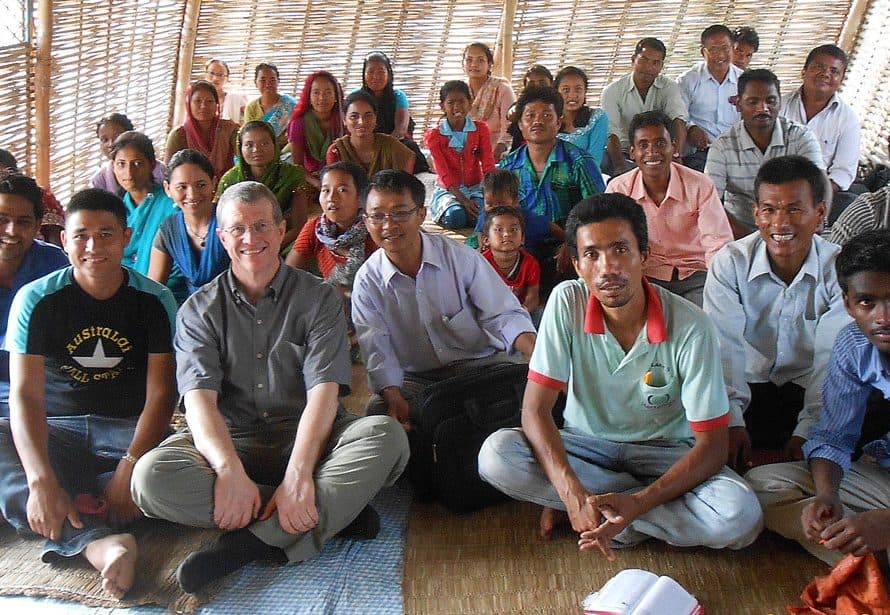 CLINTON — Randy Shipman, pastor of First Baptist Church, Clinton, sits with church leaders in Nepal during a training session for church leaders during a mission trip in 2013. Photo courtesy of FBC, Clinton.

CLINTON – Two-and-a-half million dollars seems like a lot of money. Many Missouri Baptist churches will not handle that kind of cash in several decades or a hundred years. But a western Missouri county seat town church has generated that much or more for funding missions efforts in the last decade.

After a mission celebration which highlighted the need of missionary efforts, the First Baptist Church of Clinton began sending out mission teams and doing missions in their local community. Dollars for these projects followed and church leaders kept track of the monies raised since that time. They now have a clear strategy for mobilizing people to pray, give to and go on missions.

The church is heavily involved in ministries in their local community, but also send mission teams to several countries overseas as well as Canada and Mexico.

Pastor Randy Shipman said he heard John Marshall, pastor of Second Baptist Church, Springfield, lead a mission seminar in 1997. “That talk helped me take the components of mission and ministry and organize my toolbox,” Shipman said. He moved to Clinton in 2000 and began thinking how he could lead the First Baptist Church to impact the entire world.

“An organization called Global Focus, out of Ackworth, Ga., helped us develop our strategy for mobilization in 2005.” After consulting with them and being coached and mentored, he said they began to see some transformation in the church’s thinking about missions engagement.

“We decided to become a praying people,” Shipman said. “People are now describing our church strategy as being missional.” The church is getting ready to celebrate their 150th anniversary in 2016 and Pastor Shipman said they have always given generously to the Cooperative Program, International and North American missions offerings. But the church realized there had to be more to it than financial gifts.

After forming a structure, they call “ActsOne8” (based on the Scripture Acts 1:8), they now have three teams for Jerusalem (Clinton and Henry County), Judea/Samaria (North America and Mexico) and Ends of the Earth (the rest of the world). Teams are making plans for mission trips to Jamaica, Haiti and Romania in 2016. Judea/Samaria efforts include Fargo, North Dakota; Canada and Missouri. They have also ministered to native Americans in eastern Nebraska in recent years.

Pastor Shipman said the church will send about $25,900 to the Lottie Moon Offering for International Missions this Christmas. They contribute 3.6% of the church budget annually to the SBC Cooperative Program. And all told, the church raised about $80,320 for all mission efforts including mission trips in 2014-15. The total for the last 10 years is $2.5 million. They try to have mission celebration conferences every 18 months to bring in some of the missionaries and let people hear the stories of the mission teams.

Mark Abney, the church’s Global Impact team leader said they are “trying to lead the church to see the Biblical truth that it is not what they do, but who they are, that defines missions.engagement” He said he is observing people “catch on fire” for the sharing of the gospel to all people.

Abney said a Canadian missionary stayed in the home of one of their men, Gene Weter, during a mission conference several years ago. As the missionary shared stories of Canadian Baptist work, the host became very excited and has now led 12 mission teams to Cochrane, Alberta to assist with the Canadian Southern Baptist Seminary there.

Another volunteer, Ray Noland, said he loves to lead the men of the church to build handicap access ramps for people in the community. “A lady was walking with the help of a walker,” he said, “and she will soon be needing a wheelchair.” He said they were able to build a little deck on the side of the house so she can sit outside in the sunshine during warmer weather. Noland said he thinks the church is doing ten times what they used to be doing in their community and worldwide missions efforts now. “Make that first (mission) trip and the second one will soon evolve” he encouraged.

Pastor Shipman said, “The Lord has done amazing things here. Our goal each year is to mobilize as many people in missions as the number of people attending Sunday School.” He said they count about 400 persons involved in missions each year (although some of those are people who engage in multiple projects). He encourages Missouri Baptists to celebrate missions and explore opportunities to pray, give and go.