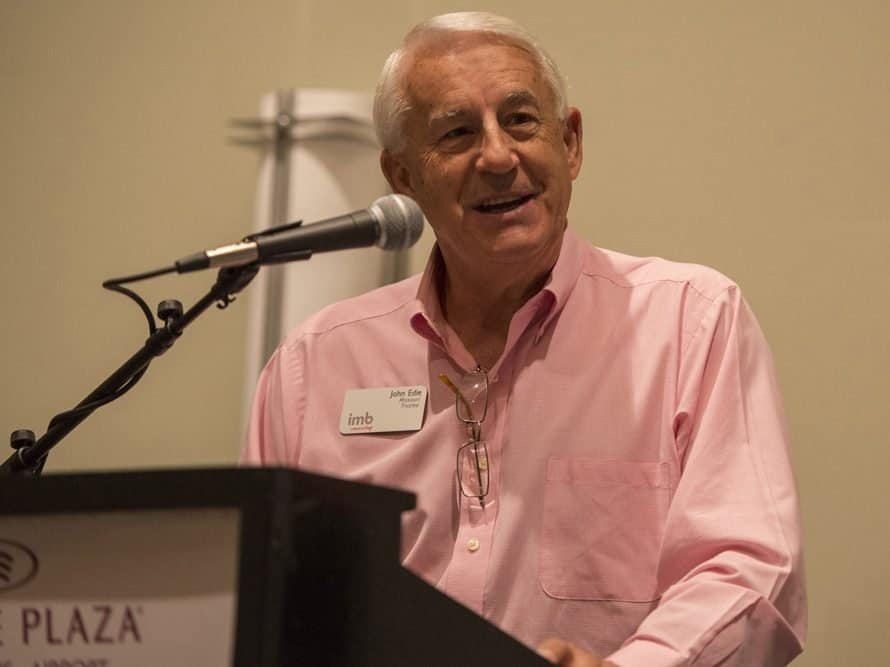 During a time of special recognition Thursday evening, trustees honored the service of retiring leaders Terry and Vicki Lassiter; Tim and Charlotte Cearley; Tom and Janet Williams; and David and Judy Steverson. IMB President David Platt and his wife Heather led the recognition of the personnel, who have accepted IMB’s voluntary retirement incentive.

Terry and Vicki Lassiter served through IMB for 26 years. Terry most recently served as American Peoples Affinity Group strategy leader. “His passion for getting the Gospel to unreached people is his driving ambition,” Platt said.

Tim and Charlotte Cearley served through IMB for 35 years. Tim most recently served as Sub-Saharan African Peoples Affinity Group strategy leader. “This brother and sister have gone places that are remote and hard to reach,” Platt said. “The fruit of their lives around the world has brought great glory to God.”

Tom and Janet Williams served through IMB for 34 years. They moved to several countries as calls of service came to them, said Clyde Meador, executive advisor to the president. Tom most recently served as vice president of the Office of Global Personnel and then in leadership of overseas personnel. “He has faithfully – in the face of every challenge – stepped forward, carrying the Gospel and carrying every responsibility given to him,” Meador said. “Tom and Janet continue sharing the light of Christ wherever they are.”

David and Judy Steverson served through IMB for 29 years. David recently served as treasurer and vice president of finance, and as chief financial officer. “He has, in so many ways, epitomized integrity and trust,” Meador said. “I doubt there has been a person in IMB leadership who has been more trusted than David Steverson through the years.”

The voluntary retirement incentive is the first phase of a financial plan, which involves reducing IMB staff and personnel by at least 600 people, in response to revenue shortfalls. The goal of the plan, IMB leaders shared, is to offer as generous a voluntary retirement incentive as possible, while honoring years of service and providing a smooth transition for the personnel.

The number of personnel accepting the retirement incentive is still not final, Platt said, because decisions are still being confirmed, and also because leadership is committed to “zealously safeguard” the integrity of the process. Nov. 2 marked a milestone when eligible personnel indicated whether or not they wish to receive or reject the incentive. The Nov. 2 decision is not official until personnel sign an agreement the first week of December — and that decision can still be rescinded up to Dec. 11. In January 2016, the second phase — a “hand-raising opportunity” — provides the opportunity for all personnel and staff to pray about whether the Lord is leading them to a new place of involvement in missions outside the IMB.

“IMB now has a plan in place for balancing our budget in a way that provides for both short-term financial responsibility and long-term organizational stability,” Platt said. “IMB is grateful for Southern Baptist churches’ generous giving through the Cooperative Program and Lottie Moon Christmas Offering. Cooperative Program and Lottie Moon Christmas Offering funds are not a debt Southern Baptist churches owe the IMB, but rather a partnership of trust linked to the common task of spreading the Gospel to unreached peoples and places around the world.”

The 2016 budget proposes expenditures of $278,755,000, which is $22,580,000 higher than the projected receipts of $256,175,000. The projected deficit will be covered from reserves and is almost entirely explained by one-time costs associated with the voluntary retirement incentive. Four key factors were presented with the budget:

• LMCO giving projections for 2015-16 were based on a historical projection of the past four years’ gifts rather than equal to the offering’s “stretch” goal.

• Global engagement expenses will decrease by $7.5 million, but the per capita spending will increase by 10 percent per field personnel.

• Proceeds from property sales have not been factored into the 2016 budget. Any property sale receipts are planned to replenish and stabilize IMB’s reserves.

“We are thankful to have experienced ongoing growth in both Cooperative Program and Lottie Moon Christmas Offering giving,” Platt said. “Despite a challenging year in which we face difficult economic realities, we praise God for the many missionaries this budget enables us to support throughout the world.”

“We appreciate your partnership in the Gospel as we work together towards a healthier financial future with a balanced budget and responsible reserves, all while we steward the resources God provides with excellence and with a clear aim of maximizing our ability to make disciples and multiply churches among the unreached,” he said.