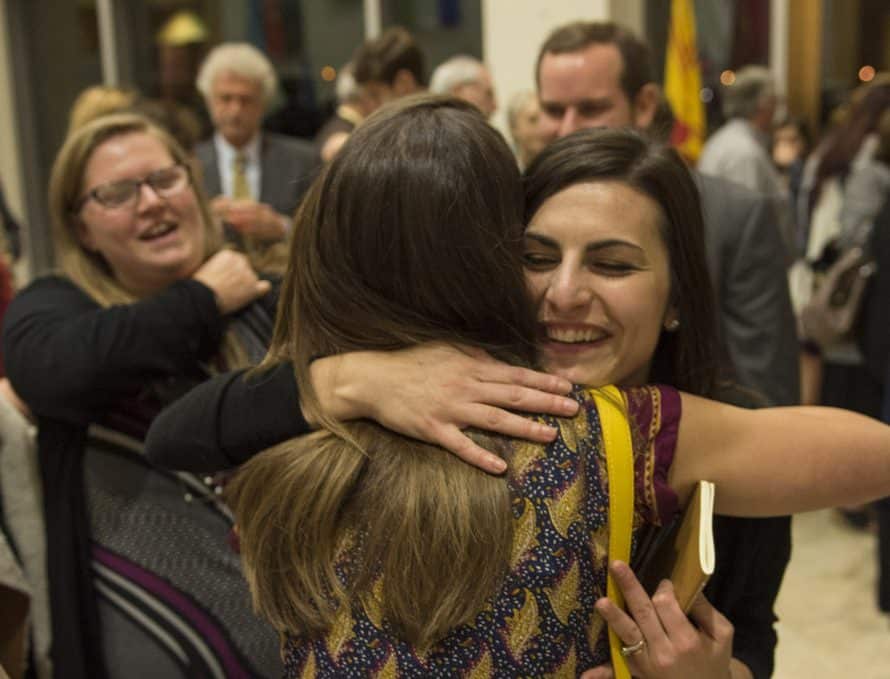 NEW ORLEANS – A new appointee to Southeast Asia hugs a friend during a reception following the appointment of 35 new missionaries by IMB trustees at First Baptist Church, Nov. 8. IMB photo.

NEW ORLEANS (BP) – Joseph Somkhith* understands the plight of today’s 60 million refugees. He once lived as one.

Somkhith was 10 years old when he and his brother fled Laos after a communist takeover in the mid-1970s. The two boys crossed the Mekong River into Thailand, facing what Somkhith described as “insecurity and violence” along the way. Nearly a year later, Somkhith’s family was reunited in a refugee camp in Thailand.

“My family separated from each other for the sake of saving our lives,” Somkhith recalled. “Living in the camp was comparable to a zoo, but soon we had the opportunity to go to America … the land of liberty and freedom.”

Somkhith and his wife Rebecca* were two of 35 candidates appointed missionaries by International Mission Board trustees Nov. 8 during a service at First Baptist Church of New Orleans. The new missionaries join IMB workers around the world serving in global cities and hard places such as jungles, deserts and war-zones.

Preaching from Revelation 5:1-14, IMB President David Platt challenged the congregation to be willing to go wherever and whenever God wants them to go because the sovereignty and grace of God demand it.

“As a Christian, you have surrendered the right to determine the direction of your life,” he said. “You can’t be a disciple of Jesus if you don’t renounce everything.”

While Platt acknowledged this level of commitment might cause some people to fear, he reminded the congregation, “Don’t forget who you are saying this to. You’re saying this to the God who loves you. He knows so much better than you what is best for your life. …It’s a good thing to put your life in the hands of this God.”

Somkhith realized these truths as a young teen, shortly after he and his family resettled as refugees in the United States.

“When I read the Bible story of Joseph, I felt God speak to my heart,” Somkhith said. “Joseph’s story related to mine…. I felt alone, frightened and abandoned (escaping Laos).”

But he realized God, whom he hadn’t known at the time, had protected him along the way.

“I could have been killed on the road but somehow was saved,” he said. “I could have been thrown into the Mekong River while on a canoe, but arrived at the camp safely. I could be one of those who was kidnapped and sold into slavery.”

This new understanding of God’s sovereignty and grace led Somkhith to put his faith in Jesus and, years later, to commit to taking the Gospel to people living in hard places.

The decision to “go” is the natural response for any believer — like Somkhith — who fully understands the glory of God, Platt said.

Because past missionaries also followed God’s call to hard places, Rebecca Somkhith stood alongside her husband, a visible testimony to the power of God to change lives through generations.

Rebecca’s grandmother, a widow with five children, heard the Gospel in her village in Laos from American missionaries, turned from the animal sacrifices required by her religion and gave her life to Christ. She also led her children to faith in Jesus, who led their children, including Rebecca, to follow Him.

“Because of this woman, every one of her descendants thus far is a child of God,” Rebecca said. “I have never met a braver woman than my grandma.”

Her grandmother’s bravery encouraged Rebecca to seek God for her own life. And now she plans to work among an unreached people and declare His glory among the nations.

Platt said, “Unreached are people who have not yet been reached by the Gospel. Apart from Christ they have no hope. More than 2.8 billion people find themselves in that position.”

Yet, he added, “The purpose of God is radically gracious, global and glorious. We are followers of Christ because God has pursued us. The whole point of Revelation 5 is that He hasn’t just purchased me or you but those from every tribe and people and nation.

“(These new missionaries) are going because God has purchased people from all these places,” Platt said. “… Not one person in this room will fail when preaching the Gospel.”

Rebecca noted, “I know this is the right time.”

“We are called to leave the comfort of our country to go to the land of the lost,” she said, “just as our brother and sister missionaries brought the good news to us long ago.”