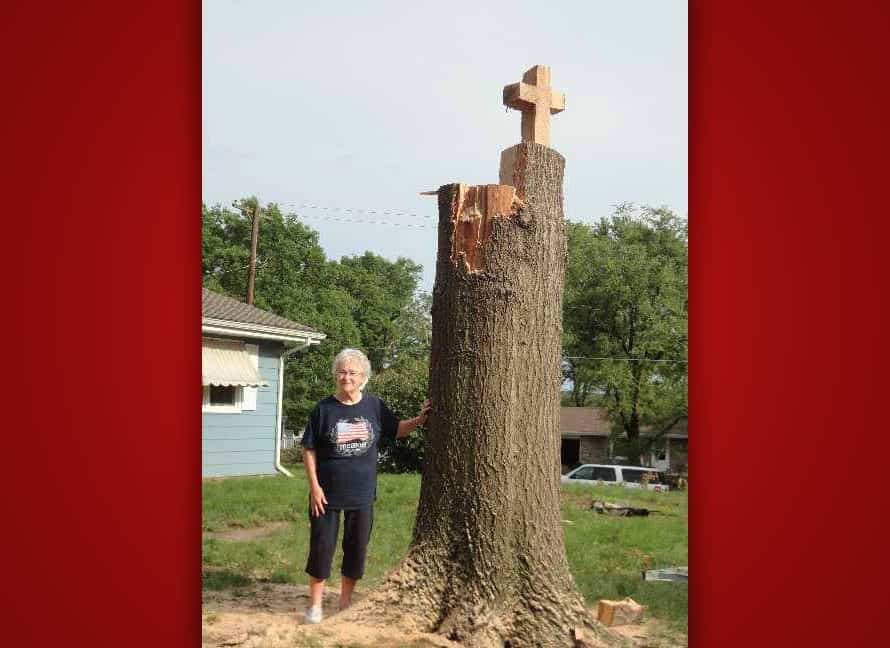 HANNIBAL - “Miss Betty” stands next to the tree she and her husband planted when they were first married. Unable to bear seeing it cut down to a stump after it was damaged in a storm in 2013, she asked Disaster Relief volunteers to leave it tall and cut a cross into it. Pathway photo courtesey Sharon Hadler

JOHNSONVILLE, S.C. – The Hadlers – Sharon and Arlin – and others from the Cape Girardeau Baptist Association Disaster Relief crews were exhausted, wet, and ready for a break.

They had joined disaster relief volunteers from churches across the country in the aftermath of record rain that left South Carolina standing in water. Once the waters receded, it was time for hours, days and weeks of mud-out and recovery. Seven Missourians were hauling out wet insulation from beneath a modular home oustide of Johnsonville, and then the phone rang.

“I saw it was a 573 number, but I didn’t make it to the phone in time and it went to voice mail” said Sharon.

The caller left a message. It was “Miss Betty.” Miss Betty was barely an acquaintance of the Hadlers, who are members of Cape County Cowboy Church in Oak Ridge. But they and others had left an impression on her. They came to her aid in 2013 when a tornado came through Hannibal, downing trees on her property.  They cut up the debris, gave her a study Bible, prayed with her and said their goodbyes.

“Her message said she was reading that Bible and our card fell out,” Sharon said. “She said ‘I’m sure you’re out helping someone else,’ but she wanted us to know that she thinks of us often and how thankful she was that we came to help her. She said that she still prays for our team.”

When the Arlin and the chainsaw crews offered to cut the mangled tree to low stump, she couldn’t bear it. Miss Betty’s husband had passed away a year or two before the tornado, and they planted the tree when they got married. Even damaged and beaten down by the weather, it had too much sentimental value to her.

It’s not uncommon for chainsaw crews to cut a cross into a stump as they remove downed trees. But in Miss Betty’s case, they decided to remove the mangled limbs then carve a cross in the 12-foot-tall “super stump.”

“She told us in the voicemail that she uses it as a witnessing tool to everyone who walks through the neighborhood,” Sharon said.

“It was so uplifting!” Sharon said. “You wonder if people remember you, but to know that she was praying for us at that moment was so encouraging. It was almost the exact same team that was there in Hannibal. We’ve gotten letters and cards from people before, but never a phone call and never this long after a job. It’s great to know that God can still us even after we’ve left the job site.”