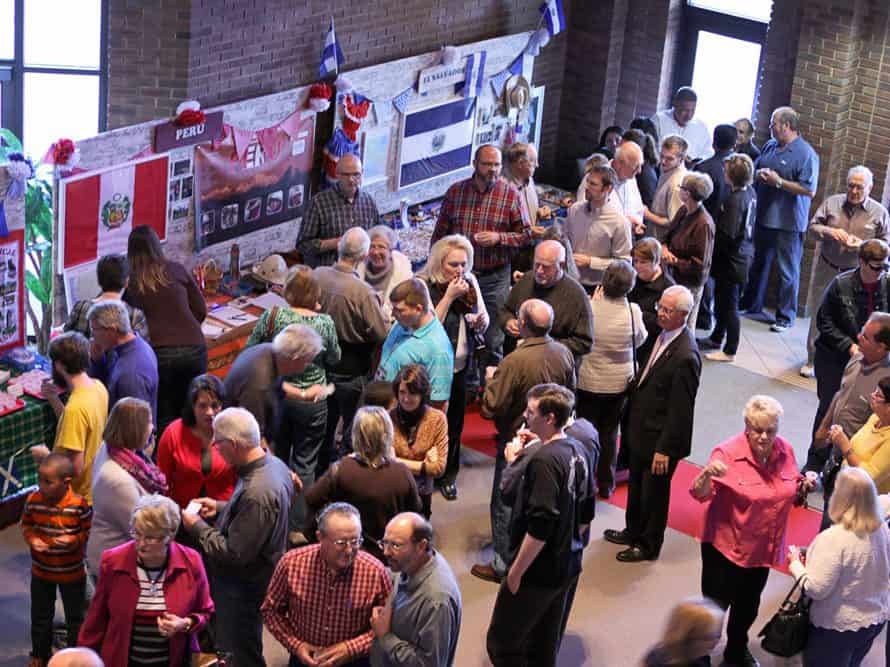 O’FALLON – Though most new years begin in January, at First Baptist Church, O’Fallon, October kicks off the year for one of the suburban St. Louis congregation’s biggest ministry priorities.

The five-day emphasis involved 12 missionaries in multiple events, several dozen church volunteers, hundreds of families, and about 300 preschool through grade six students.  The focus of all the activity was demonstrating the variety of missionary work going on locally, domestically, and internationally—as well as to promote opportunities for missions involvement in 2016.

“This year we took the approach of bringing in missionaries that we have been with on the field this past year, or we will be with this next year,” said Jon Barker, First O’Fallon’s Associate Pastor of Worship and Missions.

Barker said another change this year was “we programmed heavily on Wednesday and Sunday” since that matched better with individual and family schedules.

“There were other events, but the kick-off and wrap-up were (on Wednesday and Sunday), centered around food and celebrating.”

Missionaries discussed their work, challenges, and needs in a variety of settings, including a men’s’ breakfast, a ladies’ Bible study, in-home small groups, the church’s Pre-kindergarten to grade 6 academy students, youth and children’s programs, and all LIFE groups.

Missionaries’ tabletop displays decorated the church’s main foyer. They demonstrated not only the cultural diversity around the world, but offered insights into the lives and communities each team or individual works in.

Barker explained the conference not only points out how others are sharing Christ, but also “reminds us to be faithful in our everyday calling as witnesses in our workplaces.”

First O’Fallon expanded its missions emphasis in 2007 to put into practice the Acts 1:8 admonition to take Christ into Judea (through local activities), Samaria (with U.S and Canadian projects), and the whole world (via short-term international missions).

Its missions activities range from handing out bottled water at local 5K competitions, to multi-day trips like a 10-day program in southern Scotland. In the latter First O’Fallon worked with local churches to reach their communities for Christ by hosting youth soccer camps, leading primary and secondary school classes (in which Christ could be discussed), and prayer walking neighborhoods among other activities.

He said the trip most impacted him by learning that amid the rural beauty of the land and the kindness of the residents there was another aspect due to unemployment, alcoholism, drug use, and other negative social influences.

“There are many hurting people—people who don’t know the love of Jesus.”

While in Scotland, White and Krayton Lindsey—another trip participant—were hosted at dinner by Stranraer Baptist Church member Lesley Clark and her family.

Clark, a church lay leader, subsequently made her first trip to America to participate in First O’Fallon’s missions conference.

She said the event started her thinking about additional ways the Stranraer church might encourage three missionary families it supports.

The excitement of the conference also had another effect on her: “I can take back this enthusiasm for missions.”