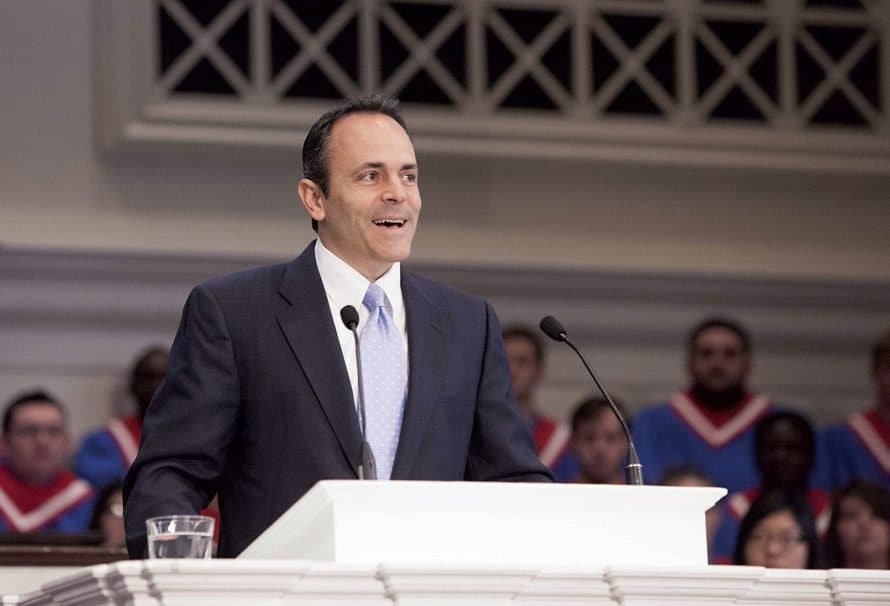 “It’s good news for Kentucky that someone with Matt Bevin’s values has been elected convincingly,” Mohler said. “Matt Bevin is a man of character; he is a Christian who loves the gospel of Jesus Christ.”

“Matt Bevin is a man of character; he is a Christian who loves the gospel of Jesus Christ.” – Albert Mohler

Bevin, a businessman who has never held political office, won with a nine-point margin over Democratic nominee Jack Conway. He becomes only the second Republican governor for Kentucky in four decades and won despite a barrage of negative ads and polls suggesting he trailed Conway by five points.

Mohler said Bevin’s victory, along with Ohio rejecting the legalization of marijuana and the city of Houston voting down a non-discrimination ordinance protecting LGBT rights, illustrate “Americans are not following lockstep with the moral dictates of the elites.” Mohler suggested Conway, Kentucky’s attorney general, may have lost because he refused to appeal a federal judge’s ruling in February 2014 striking down the state’s same-sex marriage ban.

“I think it was confirmation of what many voters believe about Jack Conway in terms of his basic alliance with a liberal set of values on so many moral questions,” Mohler said. “On that issue, he could no longer dodge the question but had to decide if he would defend Kentucky’s constitutional amendment or not and he chose not to. And I think with Kentucky voters that will be what is most remembered about Jack Conway’s tenure as attorney general.”

Conway’s campaign and his super PAC also targeted Bevin’s character in a series of TV commercials, calling him both a “hypocrite” and a “liar.” Mohler defended Bevin in interviews with the Associated Press, KET, and Courier-Journal, saying Bevin is “a man of unquestioned character and proven integrity.”

Bevin’s relationship with Southern Seminary began after the tragic loss of his oldest daughter, Brittiney, who was killed in a car accident in front of the seminary’s campus on Lexington Road in September 2003. Brittiney had expressed a desire to serve in international missions and the night before her death had written a “dangerous prayer” in her journal that God would “place broken hearted people in my path and fill me with you so that I can let your love heal their pain.”

Reflecting on a friendship with Bevin that began after this tragedy, Mohler said the family’s grief was “transformed into a massive commitment to Christian missions.” In October 2012, Matt Bevin partnered with the seminary to endow the Bevin Center for Missions Mobilization, which deploys students for missions work to fulfill Brittiney’s dream to reach the nations. Through Bevin’s support, the center has expanded its international and domestic missions trips, hosts missionaries in residence, offers training events, and produces a global missions summit each spring.

When the center opened three years ago, Bevin said he was “confident” Southern Seminary “is an institution that will steward this in a way that will serve God best.”

Bevin and his wife, Glenna, have nine children, four of whom were adopted from Ethiopia. They are members of Louisville’s Southeast Christian Church and their children attend Portland Christian School.

Bevin will be inaugurated as governor Dec. 8. More information on Southern Seminary’s Bevin Center is available online at missions.sbts.edu.